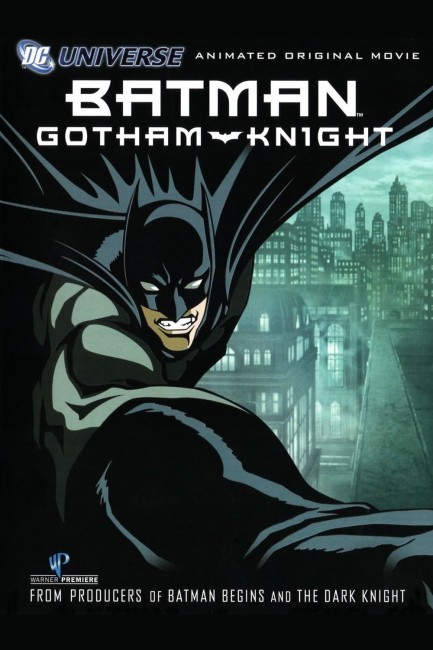 Have I Got a Story For You

Have I Got a Story For You:- A group of skateboarding youths gather to tell incredible stories of their encounters with Batman. Crossfire:- Detectives Crispus Allen and Anna Ramirez, two of Lieutenant Gordon’s handpicked detective squad, are assigned to deliver an escaped inmate back to Arkham Asylum after he is captured by Batman. Crispus resents being required to act as delivery boy for a vigilante. As they argue about this, Anna swerves off the road, only for them to be caught in the crossfire of a shootout between two rival gangland factions. Field Test:- Bruce decides to field test a new device created by Lucius Fox that will project an electromagnetic field to deflect bullets for potential inclusion in his Batman costume. However, this has unforeseen side effects. In Darkness Falls:- Batman pursues The Scarecrow down into the sewers after he abducts a cardinal. There he must face Killer Croc, a giant-sized man born deformed as a result of the waste in the sewers whose mind has been warped by The Scarecrow’s fear-enhancing drugs. Working Through Pain:- A wounded Batman loses a great deal of blood in the sewers. As he struggles back to rendezvous with Alfred, Bruce remembers back to when he travelled to India to learn the mystic art of tuning out and ignoring pain. Rejected by the fakirs because his motive was not seeking enlightenment, he was taken on by the socially outcast Cassandra. Deadshot:- Batman pursues the legendary assassin Deadshot who is able to hit a target from several miles away. Deadshot is said to be hunting Commissioner Gordon but during the pursuit Batman discovers that this has been a ruse to lure out the real target – him.

Batman: Gotham Knight is an interesting experiment. It is an animated film – which is nothing unusual, we have had a number of Batman animated films in the last few years (see below). However, the novelty in the case of Gotham Knight is that it tells six different stories about Batman. Even more so than that, Warner Brothers Animation travelled to Japan and hired six different directors from four different anime companies to each offer their own unique interpretation of the Batman mythos. The closest point of comparison – indeed the almost certain source of inspiration behind Batman: Gotham Knight – is surely The Animatrix (2003) where the Wachowski Brothers recruited seven different anime directors and asked them to each come up with nine different short films set in the universe of The Matrix (1999). Indeed, both the production companies Studio 4oC and Madhouse, who are heavily involved with Batman: Gotham Knight, were responsible for several of the Animatrix episodes. (Unlike The Animatrix, all of the anime directors here are previous unknowns, with many making their directorial debuts). If one wants a further source of inspiration you could look to the Marvel Mangaverse where Marvel Comics did a novelty run that reinterpreted their in-house superheroes as manga/anime characters.

Batman: Gotham Knight is produced by Bruce Timm, the man who was largely responsible for the animated Batman revival in the 1990s with the remarkable tv series Batman (1992-4) and then several film spinoffs – Batman: Mask of the Phantasm (1993), Batman and Mr Freeze: SubZero (1998), The Batman Superman Movie: World’s Finest (1998), Batman: Mystery of the Batwoman (2003), and the various DC Universe Original Animated Films Superman/Batman: Public Enemies (2009), Batman: Under the Red Hood (2010), Superman/Batman: Apocalypse (2010), Batman: Year One (2011), Batman: The Dark Knight Returns Part I (2012), Batman: The Dark Knight Returns Part II (2013), Batman: Assault on Arkham (2014), Son of Batman (2014), Batman vs. Robin (2015), Batman: Bad Blood (2016), Batman: The Killing Joke (2016), Batman and Harley Quinn (2017), Batman: Gotham By Gaslight (2018) and Batman: Hush (2019). Timm also oversaw a further tv series, the futuristic Batman Beyond/Batman of the Future (1999-2001), which also spun off one animated film Batman Beyond: Return of the Joker (2000), and was involved in various capacities on several other animated DC superhero tv adaptations including Superman (1996-2000), Justice League (2001-6), Teen Titans (2003-6), Green Lantern: The Animated Series (2011-3) and film spinoffs from most of these. (There was also a further original animated series The Batman (2004-8), which has had one film spinoff with The Batman vs. Dracula (2005), although this is without Timm or any of his creative team’s involvement). On script here is Alan Burnett, a writer/producer on most of Bruce Timm’s shows, and David S. Goyer who was been behind a number of modern comic-book to screen adaptations including the Blade series, Batman Begins (2005), Ghost Rider (2007) and sequels, as well as comic-book author Brian Azzarello.

Certainly, effort is made to make Batman: Gotham Knight slightly more than a series of short films loosely related around a common theme. There are points of connection woven into several of the episodes, notably concerning the gangland war between The Russian and Sal Maroni and the dirty dealings of property developer Ronald Marshall. The character of detective Crispus Allen (a minor comic-book character who appears on screen for the first time ever) turns up in different episodes.

It is also clear that Batman: Gotham Knight has been intended as a tie-in with the 00s reboot of the Batman cinematic franchise with Christopher Nolan’s Batman Begins (2005). It is after all executive produced by Nolan’s wife Emma Smith and was released only two weeks before Christopher Nolan’s second Batman outing The Dark Knight (2008) premiered, as well as features Detective Anna Ramirez, a character that was especially created by Nolan for The Dark Knight. Corresponding with Christopher Nolan’s take on the Batman mythos, Batman: Gotham Knight is set during Batman’s early days where we still see him coming to discover himself and where later-to-be Commissioner Gordon is still a lieutenant.

Batman: Gotham Knight emerges as a mixed bag. It is certainly better than the whole of the second animated series The Batman. However, if you sit Gotham Knight alongside most of the other Bruce Timm animated films, you can see that its strong suit lies in terms of mood and brooding atmosphere but that it does less effectively in terms of overall plot. The anthology format by its very nature leads to a film that is more piecemeal than whole where none of the episodes comes to the fore as stories, more so as fragmented pieces of mood that one wishes could have been extended further just to see where the individual creators might have taken them. You cannot help but feel if some of the dazzling artistic style here had been combined with the much stronger stories of Timm’s animated films, we could have had between them one standout animated Batman film. Even the story from the recognizable name writer David S. Goyer, In Darkness Dwells, never does much with either the characters of Killer Croc or The Scarecrow (who both come off as disappointingly crudely animated throughout the piece).

The other thing that the many different hands in the mix gives us is some very different approaches to the main characters. Though they are both voiced by the same actors, Alfred and Commissioner Gordon differ radically between episodes – Alfred varies between the usual balding mousy character of the comic-books to a sturdy, solidly built figure with a full head of silvery hair, while Commissioner Gordon markedly changes in age. Even more noticeable is how Batman is given drastically different interpretations by differing directors – varying from the familiar comic-book look to one episode where his hood has become something hawk-like with two eyes peering out. The wildest interpretation comes in the Have I Got a Story For You episode where Batman becomes a supernatural figure able to disappear and rematerialize at will and in appearance has become something feral with flapping wings, a rat-like body, fanged teeth and red eyes (although to the story’s credit this is something that is probably being embellished by kids in the retelling). Meanwhile, Bruce Wayne becomes a standard modern anime hero of long, callow youthful face with artfully draped forelock.

The mood throughout the episodes is beautifully sustained. The artwork is stunning and the backgrounds of Gotham City frequently breathtaking. In most of the other Batman films (live-action or animated), the star of the show gets to be the guest villains but here the briefness of the stories here pushes the super-villains to the side and places the emphasis firmly on the brooding Batman. The anthology format has also allowed some of the storytellers to expand out and place focus on characters peripheral to the action – the skater kids in Have I Got a Story For You, the cops in Crossfire – and tell the story through their eyes instead of Batman. It is hard to pick which of the episodes is the standout as all feature dazzling artwork but also have the same problem of stories that keep feeling they should have been stronger or longer. One’s pick would probably go to the last episode Deadshot, which finally gives us a worthwhile quasi-superheroic nemesis (albeit borrowed from Marvel’s Bullseye) and some stunning action moves fighting around the top of a train.