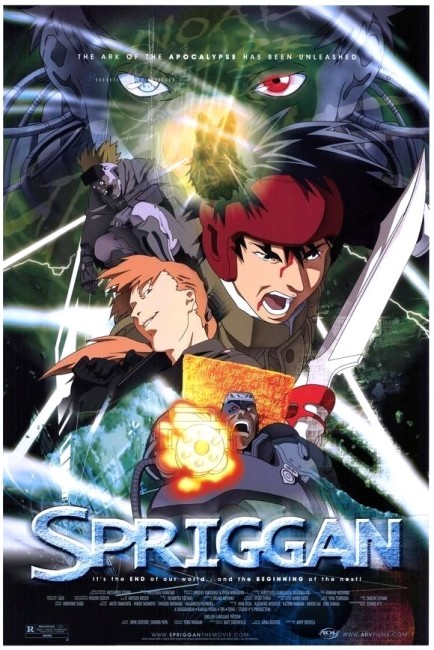 Seventeen year-old Ominae Yu is a Spriggan, a member of the secret organisation ARCAM, which guards the world from dangerous artifacts. He is sent to Mount Ararat in Turkey where the remnants of Noah’s Ark have been discovered by archaeologists. As Yu arrives, so does Colonel MacDougall, a child who is the result of secret CIA genetic experiments and has incredible psychic powers. MacDougall takes over the Ark, revealing is an alien artefact of immense power, including having to ability to control weather and manipulate genetic structure, a power he now intends to unleash against the world.

Katsuhiro Otomo created a landmark with Akira (1988), a film that single-handedly created the cult of anime in the West and whose tropes have cast a giant shadow over anime since. Otomo himself has remained a shadowy figure in the ensuing decade-and-a-half, a presence who has kept his fingers in half-a-dozen other films – Roujin Z (1991), Memories (1995), Perfect Blue (1997), Metropolis (2001) – and only directed one other – World Apartment Horror (1991) – yet, despite his lack of output, still remains one of the few figures from anime to have wider name recognition in the West. Otomo did eventually return to direct another anime with Steamboy (2004) – sixteen years after Akira, followed by the live-action Bugmaster (2006) and the Combustible episode of the anime anthology Short Peace (2013).

In Spriggan, Katsuhiro Otomo has the vague role of ‘General Supervisor’. There is certainly much of Akira in Spriggan – the central character of a kid with psychic powers who unleashes an epic-sized swathe of destruction, covert government agencies attempting to control the force. Spriggan is fairly generic in its plot as anime goes – superheroics, cyborg villains, psychic powers, big guns and explosions, an artefact of unbelievable power unleashing the potential for world destruction, a teen hero improbably charged with singlehandedly saving the world.

Most amusing is how in the film Noah’s Ark undergoes a metamorphosis from the Biblical story, where it is merely a vessel carrying animals, to become more of a Raiders of Noah’s Ark where it is now an alien artefact that can control weather and change genetic codes.

Within the formulaic limits of the story though, director Hirotsugu Kawasaki creates an entertaining show. There are some exciting action scenes – a car and foot chase through Turkish streets, a massive all-out armed attack on the encampment, psychic conflagration and, of course, the big scale mass destruction climax. One has been spoiled by the recent high art animation of Disney, Pixar et al of late so you tend at first not to notice what an incredible degree of detail the more standard, less arty animation here has been conducted with when it comes to the backgrounds, landscapes and incidental texture.

the film is based on the manga Spriggan that ran from 1989 t0 1996 in Weekley Sunday Shonen magazine and is collected in eleven volumes. It was also adapted into a videogame in 1999.

After making his directorial debut here, Hirotsugu Kawasaki, a former Otomo protege, subsequently went onto make Naruto the Movie 2: Legend of the Stone of Gelel (2005) and Legend of the Millennium Dragon (2011).