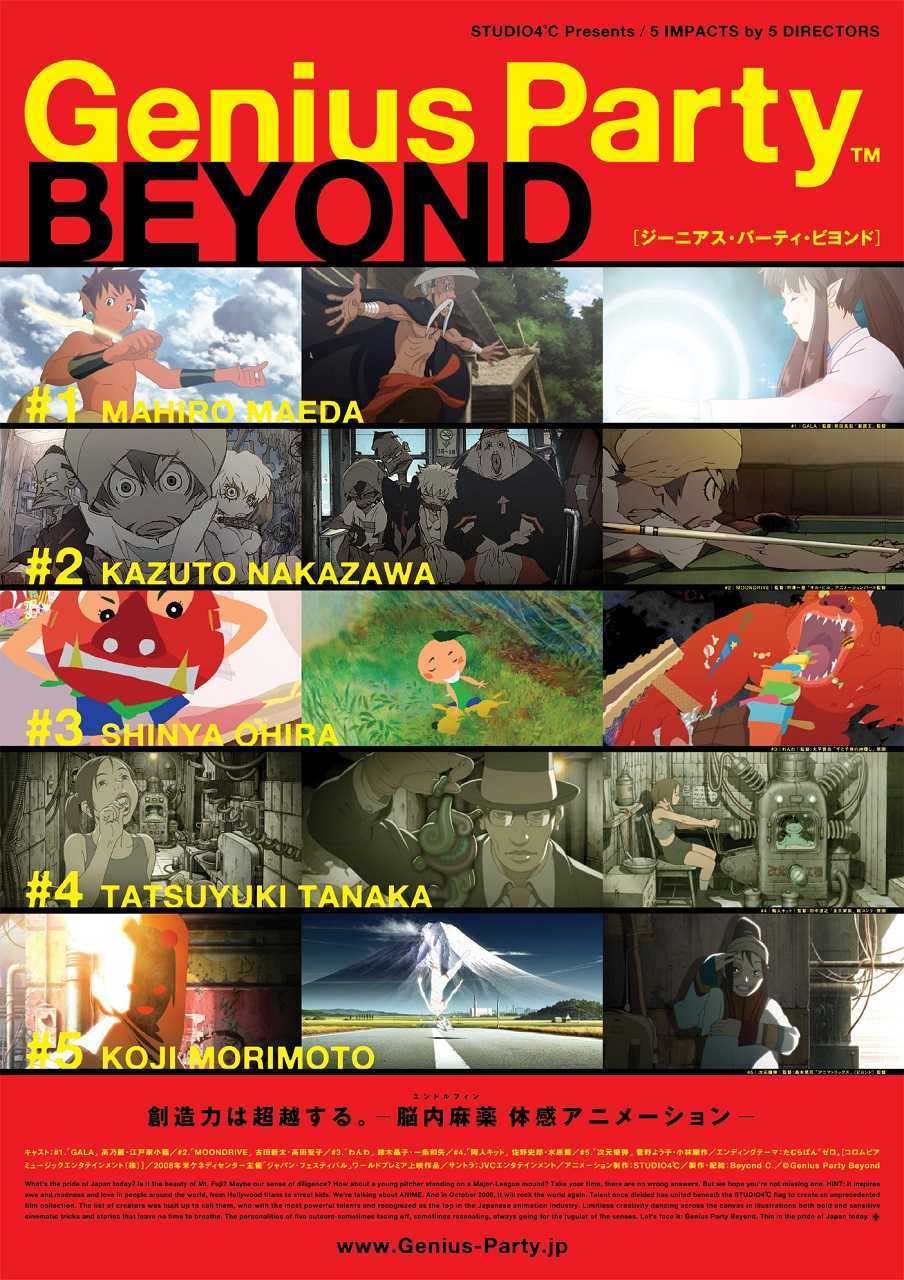 Gala:- A giant-sized pod lands outside a village. As the creatures in the village attempt to blast and drill it open, the old wise man Jii imprecates the youth to serenade it with giant musical instruments. This has an amazing transformative effect on the pod and the whole village. Moondrive:- In a rundown future, a group of youths obtain a map that leads the way to an island paradise and set out to find it. Wanwa the Doggy:- A young child dreams through a kaleidoscopic landscape. Tojin Kit:- Security forces burst into the apartment to stop a girl who has been building living dolls filled with the lifeforce of the extra-dimensional Tojin. Dimension Bomb:- A surreal and apocalyptic series of images play out.

The anthology film has always held a respectable place in Japanese anime. See efforts like Neo-Tokyo (1987), Robot Carnival (1987), Memories (1995), Short Peace (2013) and in more recent years Western-backed packages like The Animatrix (2003), Batman: Gotham Knight (2008), Halo Legends (2010) and Green Lantern: Emerald Knights (2011). This has often been a form to showcase novice directors – names like Katsuhiro Otomo and Satoshi Kon both made some of their first works here. Genius Party Beyond is a follow-up to Genius Party (2007), an earlier anthology from various anime directors, although this did not gain as high a profile as did its successor here.

Genius Party Beyond has been made as a vehicle for various directors from the anime house Studio 4oC. Studio 4oC has been responsible for theatrical feature films such as Mindgame (2004) and Tekkonkinkreet (2006), as well as episodes of the aforementioned The Animatrix, Gotham Knight, Halo Legends and Green Lantern: Emerald Knights. The five directors assigned here are all newcomers with the exception of Koji Morimoto who had directed segments of Robot Carnival, Memories and The Animatrix.

As with any anthology, and more so than most, the segments in Genius Party Beyond wildly vary in tone and quality. There is no common linking theme between any of the episodes – each of the individual directors appear to have just been given the assignment to let their creative impulses roam to their wildest imaginings. About the one linking theme between all of the segments, not necessarily an intentional one, is that the sum effect of the film is of animators who have all taken a bunch of interesting drugs and let their minds conjure the trippiest visions that they could. To find a film to make analogy to you might call Genius Party Beyond a modern version of Disney’s Fantasia (1940) – that is minus the musical soundtrack.

The first episode Gala is in some regards the weakest segment of the entire film. The various cute animal creatures running around the village, the adolescent heroes and heroines flying and wielding superpowers makes the episode seem like another piece of juvenile shonen or shoujo anime. The episode builds to some vibrant and colourful cavorting around the seedpod as the villagers dance and the teens fly about on giant-sized musical instruments, causing the pod to burst open. The segment’s twist ending pullback is appealingly cute.

The second episode Moondrive takes an abrupt change in tone. Whereas Gala is an adolescent piece, Moondrive seems aimed more at cynical teenagers. The tone of the two segments varies abruptly – going from typical rounded line-drawn anime to a more sketchy depiction in the style common to the independent comic-book. The closest animated equivalent might be the demented South Korean anime Aachi & Sspiak (2006).

The episode comes packed with much quasi-futuristic background detail and some often eccentric visual touches – notably the frame of the episode is ragged as though the animators could not bothered to paint all the way to the edges of the screen. The main problem with Moondrive is that it is a frenetic piece with much in the way of visual incident, a bunch of annoying high-pitched teen-voiced characters but there is zero plot driving anything along. The episode arrives at a randomly abrupt ending.

The third episode Wanwa the Doggy is even more of a case of all visuals and no story. There is next to no plot, with the episode just appearing to be a drift through some child’s dream (although even that is debatable). The animation frame floats past random images, objects and visual styles, all strung together as a three-dimensional collage of sorts. Like the other episodes, the array of images and colours is overwhelming as though drug-induced artists were going completely mad in terms of trying to psychedelically overwhelm an audience.

The fourth episode Tojin Kit is the most stylistically different to any of the episodes. Rather than opening up in psychedelic wonderment, the settings are dreary hallways, apartments and railway platforms where the episode gives the impression it is heading in the direction of traditional Cyberpunk science-fiction. Even then director Tatsuyuki Tanaka throws in some wildly out there elements – the heroine sitting in her apartment surrounded by a shelf full of dolls and then one of them coming and jumping up on her lap; the arrival of the security forces where one human is surrounded by two robot officers that wear suits but have heads that look like oblate lightbulbs; where one of these has the glass casing of his head smashed during the fight and wanders about the rest of the segment with his brain falling out and the fluid sloshing over the broken edges of the bulb. This is a fascinating episode, one where you keep wishing that it would have been expanded to a full-length film just to find out more about the world we are in.

The final segment is Koji Morimoto’s Dimension Bomb. This is the least plot-based of all the segments in the film – the entire episode is a series of random images that play over one another without any connection. Morimoto throws up some stunningly visual images – kids in a field trying to catch a butterfly; a boy with a strange mask being followed by other kids; people dancing; explosions of light; a body that floats, sometimes normal-sized, sometimes a giant, gently turning over itself through the sky, down tunnels and along the city streets; a robot meditating; cosmic visions of planets and towers of energy whirling into the sky. The play of visuals, accompanied by a stunning piece of music, is completely dazzling. It is almost like someone has incarnated the trippy artwork from a series of Heavy Metal/Metal Hurlant covers as a slideshow of three-dimensional vistas. This is the undeniable masterpiece of the show.