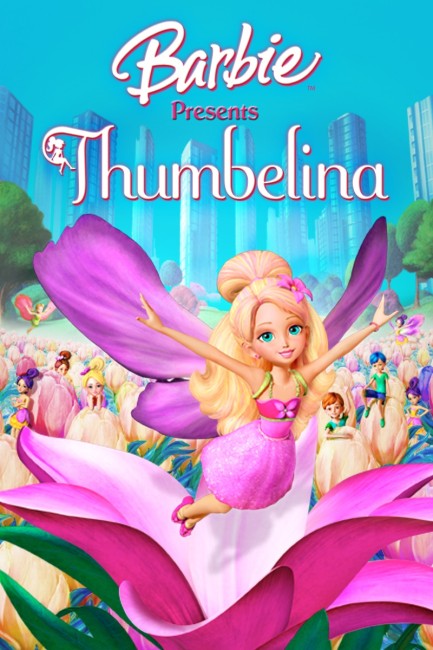 Barbie is supervising a group of young people as they plant trees. When the others laugh at young Emma for choosing a feeble stalk to plant, Barbie tells them the story of Thumbelina to illustrate of how small things can make a difference. Thumbelina was a Twillerbee, one of a tiny people that had the magical power to make things grow. The Twillerbees kept themselves hidden from humans and lived in their own world hidden inside the plant growth. One day, Thumbelina ventured out to show her friends a set of wings that she had invented and they discovered that the plot of land where the Twillerbees lived was about to be bulldozed to build a factory. Markena, the young daughter of the couple that were building the factory, was competing with her friend Violet over who had the latest cool thing and demanded that the bed of flowers where Thumbelina and the others were hiding be dug up and placed in her bedroom. When Markena discovered Thumbelina, she wanted to show her off as her latest acquisition. Thumbelina tried to get Makena to convince her parents to stop the factory from being built. Meanwhile, back at the Twillerbee home, the Twillerbees were doing everything they could to sabotage the bulldozers but the foreman Myron was fanatically determined to raze the plot of land.

Barbie Presents Thumbelina is based on the popular Hans Christian Andersen fairytale that was first published in 1835. The original tale concerns a woman who yearns for a child whereupon is given a magic seed by a witch. This produces a tiny girl that the woman names Thumbelina because she is only the size of a thumb. Most of Thumbelina’s story is a picaresque as she abducted by a toad and passes through meetings with various small animals who desire to marry her. At the end of the story, she meets a prince of the fairy people her own size and marries him.

What should be noted about the Barbie version of Thumbelina is that there is almost nothing in common between it and the Hans Christian Andersen fairytale other than the central character of a miniature-sized heroine named Thumbelina. There is no longer anything to do with Thumbelina being born from a seedpod to a childless woman – now she is one of a series of fairy-like folk (indeed, Barbie Presents Thumbelina would have no problem being rewritten as one of Rainmaker’s Barbie Fairytopia series) and has the power to make plants grow. The closest she gets to being adopted by a human is becoming the best friend of a human girl. Aside from the human girl’s comic relief dog (which never talks), all of Thumbelina’s adventures amongst the animal kingdom have been excised. There is also no fairy prince at the end.

Instead, Rainmaker have reconceived Barbie Presents Thumbelina as a fairytale that preaches conservation and environmentalism to children as a number of other animated films have done – see Ferngully: The Last Rainforest (1993), Once Upon a Forest (1993) and Happy Feet (2006). The film comes with a strong message about saving the flowerbed where the Twillerbees live with the end moral being that small gestures can make a difference to the big picture. The film also creates a cliche dichotomy – that plants and nature are good and that the material and status-obsessed society needs to recognise the importance of respecting the environment.

As I have noted, Mainframe/Rainmaker’s Barbie films seem to get better with each one they put out. This is the first one they have made that takes place in a contemporary setting. The quality of animation, the sheer iridescent wash of colour that leap from the screen is excellent. The earlier Barbie films tended towards a blank glassiness of the characters but by now the characters come with a much richer range of expressions. There are some fine animated sequences – like the dog’s pursuit of Thumbelina and the Twillerbees as they fly around the apartment. The film works with a surprising degree of amiable enjoyment.