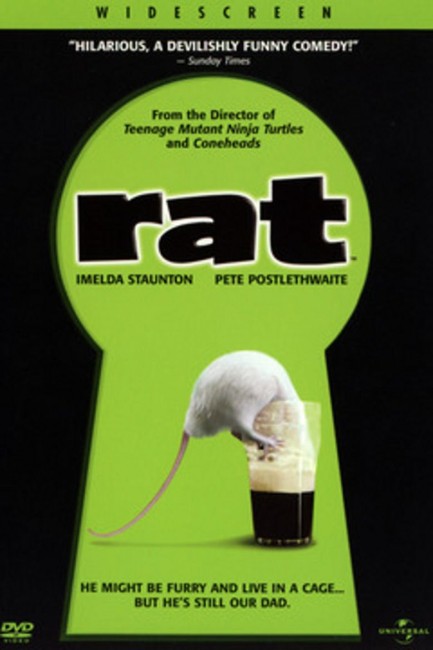 In Dublin, the Flynn household are startled when the father of the house Hubert inexplicably turns into a white rat. They are at a loss as to what to do. Writer Phelan Spratt persuades them to let him write a book about what happened and moves into the house to observe at close quarters. The situation proves problematic for the family – daughter Marietta cannot bring her boyfriend home to meet the family, while son Pious has a crisis of faith as he goes to enter the priesthood and comes to believe that the rat is ungodly and must be eliminated. After the rat bites her finger, wife Conchita decides that Hubert must be tossed over the wall into the neighbouring maggot factory and abandoned.

Director Steve Barron has been a frequent genre dabbler. All of Steve Barron’s films and tv works have ventured into sf and fantasy subjects, from films like the computer romance Electric Dreams (1984), Teenage Mutant Ninja Turtles (1990), Coneheads (1993), The Adventures of Pinocchio (1996) and Supervized (2019) to tv mini-series such as Merlin (1998), Arabian Nights (2000), Dreamkeeper (2003) and Delete (2013). Barron also co-founded Canada’s Mainframe Entertainment, the first commercial computer animation company in the world, responsible for tv series such as Reboot (1994-2001) and Beast Wars: Transformers (1996-9) and the various Barbie movies.

Steve Barron returned to his native Dublin to make Rat. Rat is a charming film. Conceptually, it is as though Barron had conducted a reworking of Franz Kafka’s The Metamorphosis (1915) but where the man turns into a rat instead of a cockroach. Perhaps if one can imagine a version of The Metamorphosis transplanted into the affectedly naturalistic working class British surroundings of something akin to tv’s Coronation Street (1960– ), Eastenders (1985– ) or more closely writer Wesley Burrowes’ own creation, the Irish soap opera The Riordans (1965-79).

The charms of Rat come in the perfect nonchalance with which everybody involved treats Pete Postlethwaite’s transformation into the title creature. The entire cast give remarkably straight-faced performances, the standout among these being the complete and absolute conviction that Imelda Staunton invests in her part.

The script does a wonderful job of taking the basic premise and playing it with completely logical plausibility. There is a delightful silliness to the scenes taking the rat to the betting shop or to the pub to have a pint; of son Andrew Lovern’s trying to explain the situation to his priest; of a scene where the rat is thrown in the washing machine and then hung from the clothesline by a peg to dry out; or where it is dressed up in an Action Man uniform for the doctor’s visit. (As the doctor trying to give a perfectly normal medical examination, Geoffrey Palmer gives an hysterically straight-faced performance).

The Henson Creature Workshop contribute a series of highly convincing animatronics – indeed, the suspension of disbelief in the film is so total that it is impossible to tell which scenes involve real rats and which are animatronic.