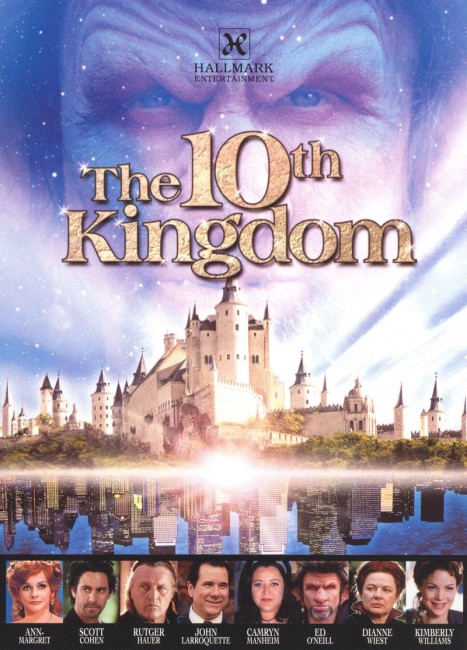 The troll king breaks into the Snow White Memorial Prison and frees the imprisoned Evil Queen just as Snow White’s grandson Prince Wendell arrives. The Evil Queen lets her golden retriever run up to Wendell and, as the two touch, they exchange bodies. Trapped in the dog’s body, Wendell flees into the prison basement and passes through a magic mirror. He finds himself in present-day New York City. There he is run over by waitress Virginia Lewis who decides to adopt him, thinking him an ordinary dog and naming him Prince. Meanwhile, the queen sends the troll king’s three children and a wolf man through the mirror to bring Wendell back. In trying to find Virginia’s whereabouts, The Wolf trades her father Tony a magic bean that offers seven wishes. Unleashed, each of the wishes that Tony makes cause chaos. Meanwhile, The Wolf becomes obsessed with Virginia. After undergoing therapy, it decides it can control its desire to eat her and that he really loves her. All the parties flee back through the mirror into the Nine Kingdoms, a magical world where the great queens Snow White, Cinderella and Rapunzel ruled 200 years ago. However, once there, the mirror, which is Virginia and Tony’s only means of getting back home, is taken. They set out on a quest across the kingdoms to get it back. During their journey, they encounter huntsmen sent by the Queen, gypsy curses, enchanted woods, villages of romance, dwarf mines and where Virginia must enter a shepherdess competition up against Little Bo Beep’s descendants. Throughout, The Wolf tries to persuade Virginia of the nobility of his intentions. They also try to find a means of getting the Wendell back to his human form, while The Evil Queen is about to consolidate her plans to have the dog that now inhabits Wendell’s body crowned as king in his place.

The 10th Kingdom falls into a mini-genre of early-mid 2000s films that offered up fairytales with a wryly knowing cynicism. These included works like the massively popular Shrek (2001) and sequels, Ella Enchanted (2004), Hoodwinked! (2005), Happily N’Ever After (2006), Enchanted (2007) and various sequels to several of these. A few years later we have had several tv series drawing on what The 10th Kingdom did in featuring various fairytale characters interacting in the present-day with the likes of Grimm (2011-7) and Once Upon a Time (2011-8).

The 10th Kingdom comes from Hallmark Entertainment, a production company that has produced a great many classic and family oriented tv movies and mini-series for the US’s Hallmark cable channel (see below). Hallmark have also ventured into fairytale deconstructions on a number of other occasions including Prince Charming (2000), Jack and the Beanstalk: The Real Story (2001) and Snow White (2001).

The 10th Kingdom starts from the amusing premise that there is an alternate world where the classic fairytales all took place with some kind of pseudo socio-historic reality and looks at such a world two hundred years on. This is never more amusingly signalled than in the first few minutes where we cut from Kimberly Williams in her New York apartment to what we are told is the ‘Snow White Memorial Prison, 4th Kingdom, 6:02 pm,’ which gets the attention in intriguing ways. However, the interesting set-up collapses almost immediately after when we get a bunch of trolls that are no more than actors in pantomime costume playing idiots and undergoing slapstick pratfalls. This, in a way, is indicative of The 10th Kingdom – a mini-series that constantly vies between interesting ideas and broad comic yocks.

The series becomes quite interesting during the first episode as we have Kimberly Williams plunged into dealing with an intelligent dog and followed by trolls and a wolf man (Scott Cohen) come in search of her. This holds some highly amusing interpolations – the wolf slavering at the things he comes across in a restaurant; the trolls trapped in a malfunctioning elevator, thinking they have been shrunken and trapped in the heroine’s pocket; and the Big Bad Wolf ending up on a therapist’s couch and confronting the conflicted feelings he has between eating and desiring Kimberly Williams.

There are constant incongruous contrasts of the contemporary world and fairytale elements – the trolls discover a ghetto blaster: “They’re called the Brothers Gibb and it’s about a deadly fever that strikes on Saturday night”; or the wolf sitting down to read motivational books about love and relationships. At one point, Kimberly Williams has to enter a shepherdess contest, where we get the highly surreal image of her conducting a crowd-rousing rendition of We Are the Champions (1977) as a sheep song.

On the other hand, there are aspects of the series that become indescribably silly. A good many of these centre around Daniel Lapaine playing the character of the dog who has been transformed into a prince – we get numerous scenes with him lifting his leg against pillars, wanting biscuits, wanting to play ball and panting out the window of the carriage. As the wolf, Scott Cohen badly plays to the gallery. There are some very silly scenes with he chasing Kimberly Williams around and trying to ply John Larroquette. And there is the entire subplot wherein John Larroquette gets a magical wishing bean and each of the wishes he makes go out of control resulting in his never-ending supply of beer exploding out of the fridge, the family of his landlord kowtowing and calling him master, and his being arrested for being in receivership of the million dollars he wished for. One suspects that this constant vying between interesting ideas and tongue-in-cheek parody may well be down to two different directors at work on the project. Sometimes the silliness works for the mini-series, other times it topples over into just being silly.

Throughout we are constantly getting elements of fairytale being replayed with a wryly knowing spin – the wolf gets to do a variation on his visit to Red Riding Hood’s grandmother but here she lives in an upmarket New York apartment. In one of the more amusing scenes, Kimberly Williams receives a gypsy curse that causes her hair to keep growing and then gets to play Rapunzel – although this is a more realistically grounded Rapunzel where we have jokes about dandruff, grey hairs and she complains about her roots being torn out when people attempt to use her hair to climb up the wall. There is the visit to the village where Little Bo Peep grew up but when the wolf meets a shepherd, she proves to be less than innocent, flirtatiously asking the wolf if he would huff and puff and blow her clothes off.

The plot ends up feeling contrived and twisted out of shape in order to get all the various fairytale elements in. The first episode sets up John Larroquette with a bunch of wishes but as soon as these have transpired they are forgotten about; Episode 2 has him place his finger inside the mouth of a fish and develop a Midas Touch but his golden finger has just been forgotten about by the subsequent episode. In another episode, they end up in the village of the Peep clan where an improbable chain of circumstances forces Kimberly Williams to have to enter a shepherdess contest. The plot here requires Kimberly Williams to have to make some improbable contortions, starting out as a waitress and passing through being a shepherdess, a lawyer, then a gambler, before finally being revealed as a descendant of Snow White.

Episode 3 and 4 in particular get a little frivolous – the visit to the town of the Peeps where we get shepherdess competitions, a trial and the casino scenes where Kimberly Williams plays Snap, which are all played for comedy, and the town where love comes true and she and the wolf are surrounded by animated hearts every time they meet. The rest of the series carries its premise well but at ten hours worth of broadcast time one starts to feel that the story has been overstretched.

The casting is generally okay. Kimberly Williams plays well. John Larroquette has been essentially cast as a comic fall guy – in every episode, he has been set up to do something wrong (letting the wishes go out of control, breaking the mirror and getting seven years bad luck, getting the Midas Touch etc). Scott Cohen’s broad acting as the wolf eventually begins to find a certain welcome. One of the stranger pieces of casting choices is the fuller figured Camryn Manheim as Snow White, a character that has always been portrayed as slender and petite.

One of the most appealing aspects of The 10th Kingdom are the opening credits where we see New York City slowly morphing into a fantasy kingdom – fairies flit by and cause fire hydrants to erupt, brownstones and skyscrapers transform into fantasy castles and a giant is seen stepping across the Brooklyn Bridge as the traffic lanes below transform into greenery. There is something quite magical to the sequence.

On the other hand, the costuming tends to the rather absurd – Rutger Hauer’s hunter wears a mesh coat with greenery randomly woven into it, which is an effect that just looks daft, while Warwick Davis’s dwarf named Acorn has a hat that is shaped like an acorn. Often the fantasy ends up seeming ordinary and not as fantastique as one might imagine a fairytale kingdom to be and real world aspects (evidence of a budget not quite stretching) – casinos, auction houses, the wolf weaning an ordinary suit – show through.