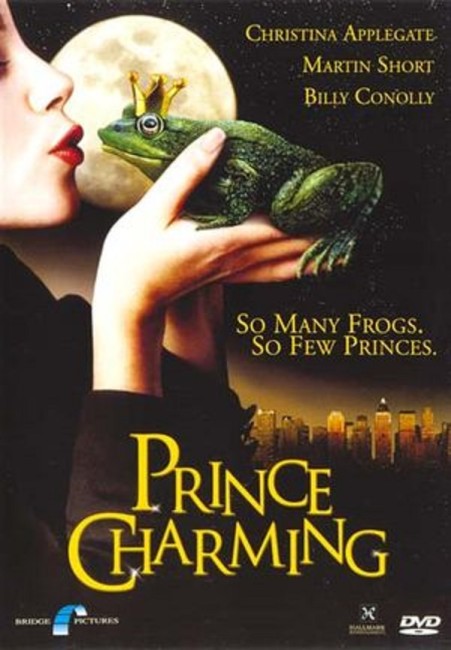 John, the womanising prince heir to the kingdom of Anwyn, is to be married to Princess Gwendolyn of Lothian to make peace between the two kingdoms. On his way to the wedding ceremony, John is distracted by a maiden in distress. After rescuing her, the two of them are caught in flagrante delicto by the Lothian soldiery. In disgrace, John’s father turns John and his assistant, the incompetent magician Rodney, over to the king of Lothian for punishment. It is decided that the two of them will be transformed into frogs until John can win a kiss from a maiden. However, once John does so, he must win the maiden’s true love and marry her within five days or the two of them will be forced to remain frogs for all eternity. 500 years later in the present day and John and Rodney are still trapped in frog bodies. They are captured by a young boy who carries them back to New York City. John finally wins a kiss from wannabe actress Margo Stocker. Transformed back to their human form, he must win Margo’s heart and marry her within five days. However, after they ask the aid of horse-drawn carriage driver Kate Russell, who finds great difficulty believing their claims about who they are, John finds his heart being drawn to Kate instead.

Hallmark Entertainment, the production arm of the US Hallmark cable channel, is responsible for a substantial amount of televised fantasy. (See bottom of page for Hallmark’s other genre productions). Hallmark has produced a number of tv adaptations of various fairytales – Jack and the Beanstalk: The Real Story (2001), Snow White (2001), Snow Queen (2002) – and fairytale-related efforts such as The 10th Kingdom (2000) and My Life as a Fairytale: Hans Christian Andersen (2001). The majority of these are not so much straight fairytale adaptations as ones that deconstruct or spoof the fairytale.

Prince Charming is a rather silly variant on these fairytale deconstructions. You are not sure what sort of film it is from the outset. We are thrown into the midst of the (hardly serious) politicking of a fantasy kingdom (where the sets and costumes all look like they have been shipped from central warehouse). Although for a family channel like Hallmark, these scenes have some surprisingly bawdy elements – the prince caught bonking in a belltower, causing the bell to ring and so on. The story then seems to turn into a talking animals fantasy akin to Babe (1995) or Cats & Dogs (2001) with the prince and his sidekick transformed into CGI talking frogs. Certainly, the idea of a story about talking frogs trying to attract maidens’ kisses has a certain wacky appeal to it. The film then jumps into the present-day, which allows some amusing interpolations – the frog prince trying to cross the street and getting gum stuck on its foot, the two frogs getting drunk on wine spilt on the street. Certainly, Prince Charming is enjoyable whenever the two talking frog characters are on screen. Although there were a few slight implausibilities required in getting us there – the notion that a kid could smuggle a live animal through US customs without being stopped, or simply that the two Mediaevals could have spent 500 years in the world and still not be conversant with modern culture.

Once it gets the two frogs transformed back into people – about 30 minutes into the show – Prince Charming settles into the formulaic. It thereafter plays like a standard time traveller comedy about the two Mediaevals trying to adjust to the modern world. Indeed, most of the film borrows substantially from the French comedy Les Visiteurs (1993) about two filthy Mediaevals accidentally transported into the present-day. There are the same three characters as Les Visiteurs – the noble seeking his true love, the annoying comic servant sidekick and the modern girl caught up in the midst and having a hard time believing it. (To reinforce the connection, Christina Applegate was cast in exactly the same role as the modern girl both here and in Just Visiting (2001), the American remake of Les Visiteurs). The subsequent Disney film Enchanted (2007) rehashed the substance of the plot here, changing the prince to an animated fairytale princess.

The story plays out predictably. It is occasionally amiable but never particularly funny. The most amusing scene is the one where the prince becomes an actor and gets the role of Mercutio in Romeo and Juliet but refuses to be killed off during the fight sequence because it is an unbecoming fate for him. In the role of the prince, Sean Maguire has a certain dashing charm. There is also the annoying Martin Short playing the sidekick, which unfortunately brings back memories of Short’s one other venture into the fairytale spoof – the ghastly A Simple Wish (1997).