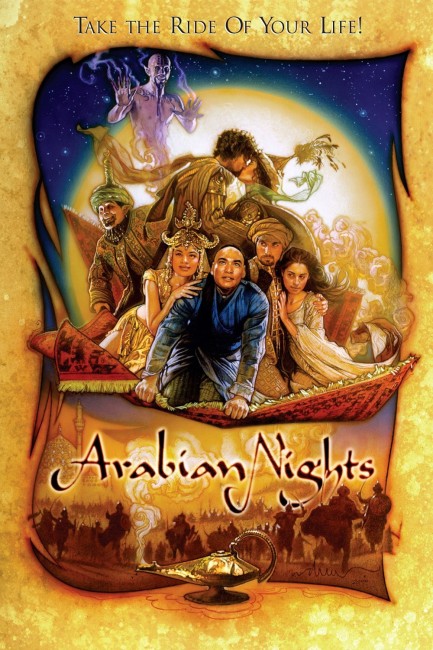 The Sultan Schariar has been driven to near madness after discovering that the woman he married had been set up by his brother Schahzenan to assassinate him. However, law requires that Schariar take a wife again or be forced to surrender his kingdom to Schahzenan. Schariar contrives a plan to take a woman from the harem as his bride and then have her executed the following morning. In an effort to prevent this atrocity, his vizier’s daughter Scheherazade offers to become his bride. Once they are married, Scheherazade comes up with a plan to entice Schariar by telling stories but leaving the ending of each unfinished until the following evening to preserve her life for one more night. She tells Schariar a variety of stories:– that of the king’s jester Bac-Bac who died in the streets and how each person who found him kept moving the body thinking themselves responsible; the story of Ali Baba and how he discovered the secret word that opened up the magic cave that housed the treasure of the thief Black Coda and his gang of 40 thieves; the story of how, for his own amusement, a sultan decided to trick a lowly beggar into believing that he had become the sultan; the story of the thief Aladdin and how he was hired to steal a magic lamp from a tomb, only to be betrayed but then find the secrets of the lamp himself and unleash its genie; the story of a dying father who requested that his three sons each travel out into the land and bring back the most precious gift. Throughout the telling of the tales, Scheherazade opens up Schariar’s turbulent heart and shows him how to stand up as the armies of his brother mass outside the city.

The Arabian Nights – or to give it its real name Alf Layla wa-Layla, which literally translates into English as One Thousand Nights and a Night – is one of the classic works of fantastic literature. The time when it was composed is unknown – sometime around the 9th-10th Centuries, with the stories originating out of the Persian oral tradition. Many of the tales were added later and their actual number varies widely from version to version. The collection first appeared in Europe with Frenchman Antoine Galland’s twelve volume translation Les Mille et une Nuits (One Thousand and One Nights) (1704-17). Galland’s translation is controversial as many of the stories in it – including those of Aladdin and Ali Baba, which have become the most famous in the collection with the general public – are not found in any other existing Arabic manuscripts. Galland is generally believed to have created these stories himself or else adapted them from now lost manuscripts. There have been a number of other translations since then, many adding and removing various tales, with the most famous of these being explorer Richard Burton’s The Book of a Thousand Nights and a Night (1885), which proved controversial due to Burton’s retaining of the original’s adult content.

This adaptation of Arabian Nights was made as a four-hour tv mini-series by Hallmark Entertainment, the production arm of the US Hallmark cable channel. Hallmark have also made a number of big-budget productions of various classic stories (see below). They brought in as director Steve Barron. Steve Barron has a long association with the fantasy genre with films like Electric Dreams (1984), Teenage Mutant Ninja Turtles (1990), Coneheads (1993), The Adventures of Pinocchio (1996), Rat (2000) and Supervized (2019). Indeed, Barron had previously directed Merlin (1998), Hallmark’s adaptation of the Arthurian legends, and went onto make the excellent Dreamkeeper (2003) for Hallmark, which does the same thing as Arabian Nights but draws from American Indian myths. He later went on to make Supervized (2019) and other mini-series like Treasure Island (2012), Delete (2013) and Around the World in 80 Days (2021)

The mini-series changes the tales around somewhat, although one can hardly regard this as a betrayal of the source material as the number of stories included in the Arabian Nights change markedly from translation to translation. Notedly though, the two longest adaptations and most familiar stories in the mini-series – Ali Baba and Aladdin – are taken from Antoine Galland’s stories, which most scholars agree were probably made up by him. The mini-series adapts three other lesser-known tales – The Story of the Humpback, The Story of Prince Ahmed and the Fairy and The Sleeper and the Awaker – changing odd aspects here and there.

The most notable change is the strengthening of the central narrative. Indeed, it is the story of Scheherazade and the Sultan Schariar that becomes the strongest aspect of the mini-series, whereas it only served as a framing device in the original. There have been a number of essential changes made to this – gone is the character of Scheherazade’s sister Dirnazad who she tells the stories to first and who marries the Sultan’s brother at the end. Even more noticeably, the character of Schariar has been made much more redeemable – where in the original he marries a woman every night and kills her in the morning, all because of his wife’s infidelity and conspiracy with his brother, here he is merely contemplating such acts and is of course persuaded out of his ways by Scheherazade at the end of the story. One of the cleverer aspects of the teleplay is the way that it intertwines the process of the storytelling in with the stories themselves – Scheherazade changes the telling depending on the mood of the Sultan and the script nicely weaves aspects from all the stories back into the finale.

Hallmark gave Arabian Nights a $30 million budget, which is usually that of a feature film rather than the average mini-series. The extra budget makes for an incredibly lavish production and Arabian Nights emerges as one of Hallmark’s finest productions. The series was shot on location in Yemen and Turkey, which gives the stories a lavish and richly textured look of historical and cultural authenticity, while also retaining the opulent colour expected of the production.

As a result, Arabian Nights more than successfully leaves behind the cardboard studio-set bound look of classic Hollywood Arabian Nights fantasies. Unlike most of the prosaic Hollywood Arabian Nights fantasies – barring odd exceptions like the aforementioned versions of The Thief of Bagdad and Ray Harryhausen’s two spectacles The 7th Voyage of Sinbad (1958) and The Golden Voyage of Sinbad (1973) – Arabian Nights opens up and lets the production fly with a full flight of fantastic imagination with dragons, duelling genies and flying carpets. Director Steve Barron has a directorial grace that weaves and dissolves in and out of the fictions and narrations with a breathtaking fluidity.

One of the standout aspects of the series is the casting. Jason Scott Lee makes for an appealingly perky Aladdin and Rufus Sewell a fine Ali Baba. The scene-stealer of the show proves to be John Leguizamo’s turn as the two genies of the lamp, which often seem like cousins to the sinister clown he played in Spawn (1997). Leguizamo and the script play the roles for comedy, often throwing in a number of modern colloquialisms. Unlike Disney’s Aladdin (1992), this does not grate with the tone of the story and Leguizamo lights the show up with his entertainingly over-the-top playing. Dougray Scott gives a suitably melodramatic portrayal of the Sultan’s madness and despair. Although the true strength of the show is Israeli actress Mili Avital’s Scheherazade. Mili Avital’s beauty and elegance proves a real strength and is the element that holds all of Arabian Nights in place with captivating potency.