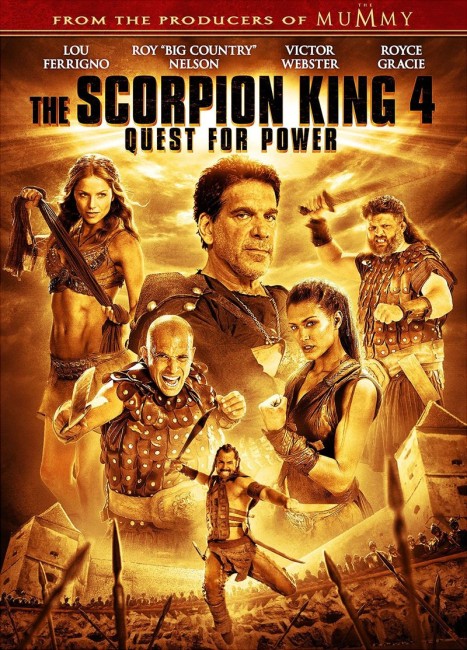 aka The Scorpion King: The Lost Throne

Mathayus and his partner Drazen conduct a raid on a palace to obtain an urn wanted by King Zakkour. Drazen then reveals that he is in fact the son of King Yannick of Nivanya, and takes the urn abandoning Mathayus. Zakkour asks Mathayus to make peace with Yannick but Mathayus replies that he is not a diplomat and sets out to retrieve the urn. Meanwhile, Yannick breaks the urn open to reveal the Key of Albamon, which contains clues that lead the way to Albamon’s crown that will make its wearer all-powerful. Mathayus allows himself to be captured to get Zakkour’s petition to make peace with Yannick. He is invited to a feast, only for Drazen to kill his father with scorpions and then accuse Mathayus of being the murderer. In his dying breath, Yannick gives Mathayus the Key. Mathayus escapes with fellow prisoner Valina, Drazen’s former fiancee. Pursued by Drazen’s soldiers, she takes Mathayus to her father Sorrell, an eccentric inventor who does not believe in the existence of magic. He decodes The Key and they set out following the trail of clues to get to the crown, all the while pursued by Drazen and his army.

The Scorpion King (2002), starring Dwayne Johnson back when he was still billing himself as The Rock, was a modest success. It was a spinoff from Stephen Sommers’ The Mummy Returns (2001) and amounted to no more than a lightweight and quickly forgettable sword-and-sorcery adventure. However, it was clearly enough for the character of The Scorpion King to be spun off in several sequels of which this was the third. It was preceded by The Scorpion King: Rise of a Warrior (2008) starring Michael Copon, which collapsed into ridiculousness due to Russell Mulcahy’s campy direction, and The Scorpion King 3: Battle for Redemption (2012) also starring Victor Webster, which emerged as the best of an extremely mediocre series due to Roel Reiné’s halfway reasonable action direction. Subsequent to this, there was also Scorpion King: Book of Souls (2018) with Zach McGowan

Canadian tae kwon do champion Victor Webster becomes the only actor in the series to return for a second outing here. Direction has been placed in the hands of Mike Elliott, the producer of a great many action films and Roger Corman video releases since the 1990s, as well as several of Rob Zombie’s films and other efforts for Roel Reiné. As director, Mike Elliott has made several films, mostly sequels, such as Beethoven’s Big Break (2008), Blue Crush 2 (2011), A Warden’s Ransom (2014) and November Rule (2015).

Unfortunately, under Mike Elliott, the more promising directions that the Scorpion King series found under Roel Reiné are abandoned and we return to the grating campiness and hip colloquialisms that wrecked Rise of a Warrior. In the opening scenes during the raid on the palace to obtain the urn – a sequence that in itself has been largely copied from the opening of Raiders of the Lost Ark (1981) – Victor Webster and Will Kemp duck shabby CGI traps while making constant flip remarks like “Don’t get any funny ideas” or “I hope that’s a knife in your pocket” as they are forced stand in close proximity. Lou Ferrigno interrupts them “What do you think you are doing in my palace?” to which Victor Webster shrugs “Redecorating?”

It is this constant tossing in of hip modern colloquial jokes that wrecked Rise of a Warrior and causes Quest for Power to sink into a godawful embarrassment within moments. And then there are scenes that sink down into genuine bad movie stakes – like the banquet that consists of everybody having to give loud belches, and especially a scene where Victor Webster and Barry Bostwick venture into the women-only temple in drag pretending to talk in Monty Python falsettos. That nobody sees fit to exercise better creative control of the handling of the films and their tone seems indicative of how indifferently these Scorpion King sequels are churned out.

You also find an inability to take any of the action scenes seriously – there is a barroom brawl scene where Victor Webster defeats an entire detachment of soldiers by simply ducking out of the way and allowing them to knock themselves out or run into things. In another sequence, he defeats a soldier by grabbing and holding up an animal skin rug and scaring the soldier into thinking the animal is attacking him – when you sit down and think about it, it seems like a combat move that only a total moron would be fooled by (or think would have a shred of possibility of working). People leap a two hundred foot drop down off a castle wall onto stony ground or are catapulted some fifty feet to slam into the side of a windmill – here the film seems to exist in the ridiculous realm that believes that neither move would end with death or at the very least massive amounts of broken bones, as opposed to the characters walking away looking mildly ruffled.

The Scorpion King 4: The Quest for Power is, when it comes down to it, an ersatz fantasy film – a fantasy film that only pretends to be fantasy but has no interest in the genre or suspension of disbelief in its world. It feels like a film made by people whose entire film school experience has been watching a bunch of 1980s action movies and thinking silly unserious sequences run over with flip buddy banter is the whole of the film.

For some odd reason, the film also chooses to side with Barry Bostwick’s scientist and treats every aspect of the supernatural – the appearance of a dragon, the powers of the crown – as rationally explainable (every if the supposed justification of magnetism allowing people to fly and maintain forcefields is science that ends up entirely in the realm of fantasy).

One of the pluses of Quest for Power is that it features an amazing supporting cast of actors with a history in action films. These include both Rutger Hauer and Michael Biehn as the two kings; Don ‘The Dragon’ Wilson who had a prolific career in a series of martial arts/action films during the 1990s/early 2000s, unrecognisable as one of the guards in the opening scenes; bodybuilder Lou Ferrigno, who was The Hulk in tv’s The Incredible Hulk (1977-81), who plays the king in the opening palace raid; WWE wrestler Eva Torres who is pitted against Ellen Holman in a cage match; and MMA fighters Royce Gracie, Roy Nelson and Antonio ‘Bigfoot’ Silva in various roles as soldiers. Barry Bostwick, once Brad in The Rocky Horror Picture Show (1975) and gotten a whole lot older since, gives a very silly performance as the scientist.