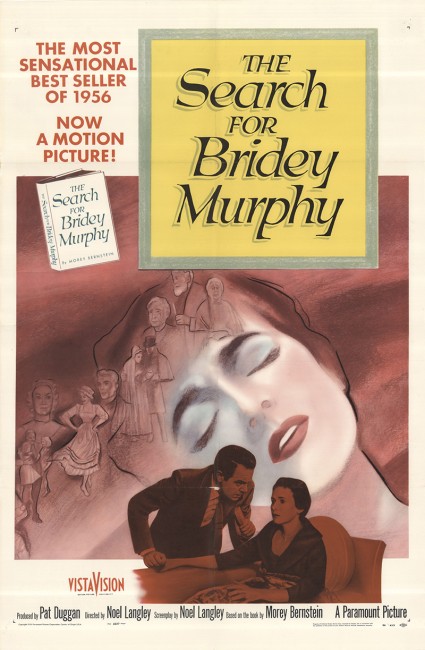 Morey Bernstein, a businessman in Pueblo, Colorado, has the cousin of a client come to stay while passing through town. At a dinner party, the man gives a hypnotism demonstration in which he regresses a woman back to her teens. Afterwards, Morey becomes fascinated with hypnotism. He reads up all he can on the subject and becomes a hypnotherapist in an unofficial capacity at a local medical centre. At a party, he gives a demonstration and hypnotises Ruth Simmons in which he takes her back to her birth and then asks her what she finds before that. He is startled when she describes her previous life as Bridey Murphy who was born in Cork, Ireland, and lived between 1798 and 1864. In subsequent sessions, Ruth tells the story of Bridey’s life, marriage and death in great detail. The world is rocked when Morey publishes a book telling the story.

The Search for Bridey Murphy is a docu-drama based on a true-life sensation that caught world attention in 1956. As the film recounts, Morey Bernstein, a successful scrap metal dealer and mail order merchant in Pueblo, Colorado, became fascinated with hypnotism after seeing a demonstration at a dinner party in the 1940s. He read all he could on the subject and started to practice. In one of his demonstrations, he took housewife Virginia Tighe back through her childhood and then pushed her to remember what came before that. In a series of sessions, Tighe recalled her past life as Bridey Murphy, a woman born in 1798 and died in 1864 who lived her whole life in Ireland. What seemed to make this convincing to Bernstein was that Tighe, who had never visited Ireland in her life, spoke with an Irish brogue, and described her past life in vivid detail.

Bernstein caused a sensation when he published the story as a book The Search for Bridey Murphy (1956). The book spent twenty-six weeks on The New York Times best-seller list. It created a fashionable fad in past lives regression with amateur hypnotists staging hypnotic regression shows and people throwing Come As You Were parties. There were even popular Bridey Murphy songs. A number of genre films from the era started to incorporate past lives and hypnotic regression themes – see below for these. You can still see its influence today in New Age regression therapies about the channelling of past lives and flakes like Shirley MacLaine who all owe their ideas to what started with the Bridey Murphy phenomenon. There was also this film – to show just how big the Bridey Murphy fad became, the book had been published in January and the film was produced and released by October of that same year.

It was not long after the Bridey Murphy phenomenon went big that some people began to pull holes in it. (The film does sort of acknowledge this with Louis Heyward’s Bernstein having a line about how the book went out to the publishers without being properly fact checked). Chicago American magazine published an article that set out to corroborate the facts reported in the book and this was followed by a high-profile expose in Life magazine, which sent journalists to Ireland to track down details and locations. No records could be found that confirmed Bridey Murphy’s birth, death, marriage or nor those of her husband and children or the house in Cork where she said she had lived, while the church where she said she was married had not been built until 1911. In her favour, some of her descriptions of the landscape and area proved to be accurate. People then began to examine Virginia Tighe’s life and discovered that she had grown up in Chicago opposite an Irish immigrant named Bridey Murphy Corkell.

The generally accepted thesis is that Morey Bernstein had placed Virginia Tighe into a state of extreme suggestibility. In this state, the mind starts to bring out memories and associations and assemble them into a narrative, especially one that the hypnotist is directing the subject towards. Crucially, the subconscious mind is unconcerned whether the story it is recounting is true or not – the same effect can be seen when one looks at the cases of repressed memories of Satanic ritual abuse or alien abduction that have supposedly been recalled under the influence of hypnotism. Most examiners of the case are convinced that everything that Virginia Tighe recalled of her past life, even her supposed Irish accent, can be explained as half-remembered details assembled from her own childhood.

Virginia Tighe died in 1995 and shunned the spotlight that had come onto her as a result of the Bridey Murphy fad, although interestingly remained sceptical about the actuality of reincarnation. Morey Bernstein withdrew as an amateur hypnotist after the publication of the book. He became a stockmarket millionaire, retired due to a crippling spinal condition and died in 1999 still certain that the Bridey Murphy story was true.

As a film, The Search for Bridey Murphy makes a painstaking attempt to be ‘factual’ (at least in so far as factual means replicating on screen the events that Morey Bernstein described in the book), even down to basing its dialogue on the actual tape transcriptions. That the film sincerely believes in its case there is no doubt – it often has the prostheletysing zeal of a religious convert that earnestly wants to convince us of its case. It even includes a bizarre scene that has Louis Heyward’s Bernstein sit down with local priests in an attempt to persuade them that reincarnation is perfectly compatible with Christianity.

This unfortunately also ends up being its downfall, especially when in it throws in earnest advocacy for Edgar Cayce. “I’m glad you’re willing to admit that Edgar Cayce wasn’t a fraud,” it is stated at one point, to which Louis Heyward nods in agreement “No, that he wasn’t.” Edgar Cayce (1877-1945) was mystic who grew up in Kentucky and between the 1910s and 1940s began to prescribe medical remedies while in a hypnotic trance, something that gained Cayce the nickname The Sleeping Prophet. Cayce gained a good deal of fame and offered many supposed cures for people, although the actuality of his successes is doubted by sceptics (see a good article at Skepdic.com). It should also be noted that Edgar Cayce made a number of predictions that were simply wrong – such as that Adolf Hitler would be a good man, that Atlantis would reappear in 1968 or 1969, and that most of the United States would vanish into the ocean in the mid-1970s – which surely says all there needs to about his abilities.

Significantly, the film is no more than an acted-out read-through of the transcript of Bernstein’s sessions where he put Tighe under. This often tediously comes down to her detailing names, dates, prayers, favourite meals and names of greengrocers, which makes for a considerably less exciting a ‘true-life’ story than it might be. Noel Langley’s direction is flat and nondescript, where the very adherence to the details of the book makes for something that is dull dramatically. The only time the film ever raises itself to anything interesting is where Ruth becomes lost in her various past identities near the end where Noel Langley generates a moderate atmosphere with the scenes of Bridey wandering the house as a disembodied soul.

Not many of those associated with the film ever had high-profile presences. Teresa Wright, who plays Ruth, was previously best known as the girl who believed her uncle was a killer in Alfred Hitchcock’s Shadow of a Doubt (1943) and was nominated for Academy Awards in The Little Foxes (1941), The Pride of the Yankees (1942) and won for Mrs Miniver (1942) but her name is little remembered today. The most interesting names are those in the supporting cast, including Kenneth Tobey, who plays Ruth’s husband, who was the lead in The Thing from Another World (1951) and played in a number of other 1950s genre classics, while the supportive doctor is played by a young Richard Anderson, best known as Oscar Goldman in tv’s The Six Million Dollar Man (1973-8) and The Bionic Woman (1976-8).