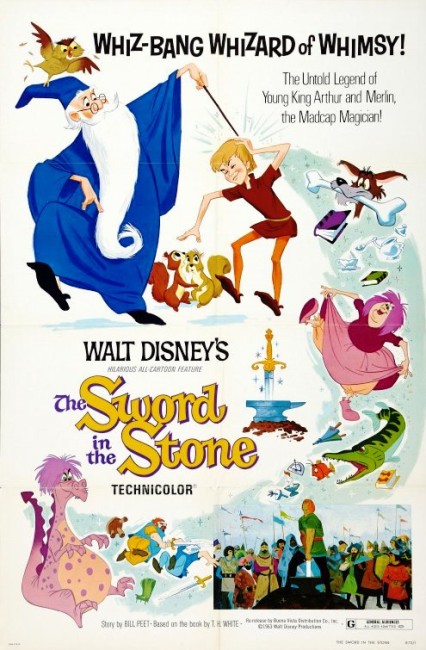 After King Uther dies, England comes to war over who will inherit the throne. A sword then appears from the sky, implanting itself in an anvil. Only the rightful king can remove it but nobody is able to do so and it is duly forgotten about. The young trainee squire Arthur, nicknamed Wart, meets the magician Merlin who knows the future and has been waiting for Arthur to arrive. He offers Arthur an education and starts to teach him about magic and the art of transforming into animals. Merlin must also face interference from his hated rival Madam Mim who is intent upon stopping Arthur claiming his destiny.

The Sword in the Stone is one of the lesser Disney animation classics. It was made during the weakest ever eras of animation output from Disney – the period between the mid 1960s and the early 1990s, when the great animation boom of the 1940s had given way to lesser fare like The Jungle Book (1967) and Robin Hood (1973) and where live-action slapstick romps like The Absent-Minded Professor (1961) and various Herbie the Love Bug and Kurt Russell comedies seemed to take pre-eminence over animation.

It was not until the animation renaissance of the 1990s that started with The Little Mermaid (1989) and Beauty and the Beast (1991) that Disney ever began to reclaim its classic name. The period is not without some worthwhile animation efforts – such as the likable The Aristo Cats (1970) and the delightful, almost forgotten The Great Mouse Detective (1986) – but more typically the studio’s output consisted of mediocre and middle-of-the-road fare like The Rescuers (1977), The Fox and the Hound (1981), The Black Cauldron (1985), Oliver & Company (1988) and this.

The Sword and the Stone was Disney’s stab at the Arthurian mythos. They adapted the 1938 novel that was the first in T.H. White’s uncompleted The Once and Future King series, wherein White set out to cover Arthur’s life from youth to manhood. Rather than tell the more mature story of Guenevere, the betrayal of Lancelot, and the treachery of Morgan-le-Fay and Mordred, Disney instead choose to adapt the story where the focus is on Arthur’s childhood. Being Disney, even then the emphasis is less on Merlin and Arthur’s kingship than it is on cute animals and slapstick. The plucking of the sword from the stone (which is never named as being Excalibur) only occurs as the very end of the story, for instance.

Part of the problem with The Sword and the Stone is director Wolfgang Reitherman. Wolfgang Reitherman became the studio’s primary animation director in the 1960s. While Walt Disney had made his and the studio’s name with a combination of cute animals and slapstick antics, under Reitherman this element became an increasingly maudlin banality. The Sword in the Stone is not perhaps as banal a film as Reitherman’s Robin Hood but it is disappointing.

Certainly, some of Reitherman’s sequences are a good deal of fun at times – the scenes with Merlin compacting his household goods into a carpetbag; Merlin and Arthur’s transformation into fish and the perch chase sequence. Equally, the sequence with Arthur and Merlin transformed into squirrels is dreadfully twee. Far too much of the film is played wholly as slapstick. Sir Ector and Kay have no characterisations in the film as being anything other than the object of buffoonish pratfalls.

And the film is sadly lacking in any magic. Contrast the climactic shape-changing battle between Merlin and Madame Mim, which is nothing more than the animated equivalent of them throwing custard pies at one another, with say The Sorcerer’s Apprentice segment of Fantasia (1940) and one can find no better comparison between the enchanting delight of classic Disney and the banality of the studio’s output during this era.