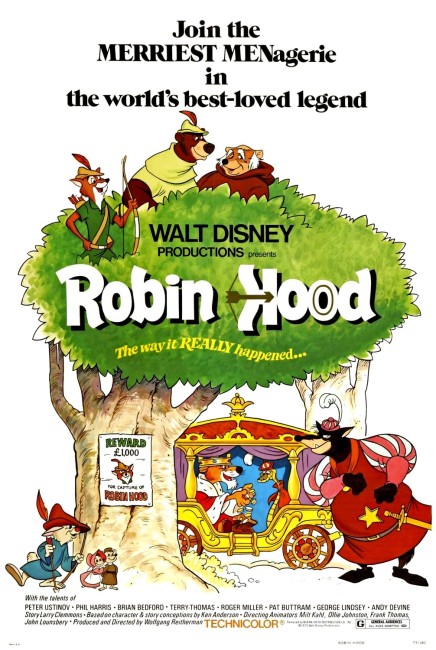 The Sheriff of Nottingham is ruthlessly taxing the good people of Nottingham. However, Robin Hood and his band of merry animals are robbing the sheriff and the nobles of the area to take the money back. When Robin embarrasses him, the Sheriff swears to get even.

Disney Studios was at its height during the Golden Age that lasted between 1937 and 1942. The studio continued well in the post-War years and made a number of classics. However, following the death of Walt Disney in 1966, the studio went into a creative decline. Things picked up with the creation of the Touchstone division in 1984 but it was not until the revival of the classic animation tradition in the 1990s that Disney fully restored the name that made them great.

The 1970s and 1980s were a creative slump for Disney with their animation division producing bland and middle-of-the-road efforts like The Rescuers (1977), The Fox and the Hound (1981), The Black Cauldron (1985), Oliver and Company (1988) and this. There were one or two reasonable efforts during this time such as The Jungle Book (1967) and The Aristo Cats (1970), although these hardly stand up with the classic efforts from th Golden Age such as Snow White and the Seven Dwarfs (1937), Fantasia (1940), Pinocchio (1940), Dumbo (1941), Bambi (1942), or even lesser post-War classics like Alice in Wonderland (1951) and Sleeping Beauty (1959). The only standout Disney animated film of this time was the underrated The Great Mouse Detective (1986). Indeed, during the 1970s, Disney’s live-action division was actually doing better business than their animation department with the likes of the Herbie and Dexter Reilly films and light comedies such as Bedknobs and Broomsticks (1971), The Apple Dumpling Gang (1976) and Freaky Friday (1976).

The principal conceit of Robin Hood is to replay the classic legend with cartoon animals – thus Robin Hood and Maid Marian become foxes, Little John a bear, Alan-a-Dale a chicken, Prince John a lion and so on. Alas, Robin Hood is not a particularly good film. There is not much enervation to the proceedings – the film seems to go through the paces without coming to life. There is a big slapstick chase in the middle of the film with soldiers careening about, flying pies and a mob that carries thrones, tents and castle spires away with them – but there is the feeling that it is a slapstick sequence largely because every Disney animation has a slapstick chase in it. The film is far too obviously trying to pull the emotional strings that Disney films do – all the children have high-pitched voices and are played for maximum dewy-eyed effect.

Even the score seems badly dated with songs that belong back in the 1940s. At its most unusual, the score features country-and-western and bluegrass music, which seems incongruous for such an essentially British legend as Robin Hood. (With equal inconsistency Alan-a-Dale and Friar Tuck both have Southern accents). Peter Ustinov does a reasonable job as Prince John, while Terry-Thomas seems to have found a natural calling for his OTT brand of acting in playing a cartoon character.