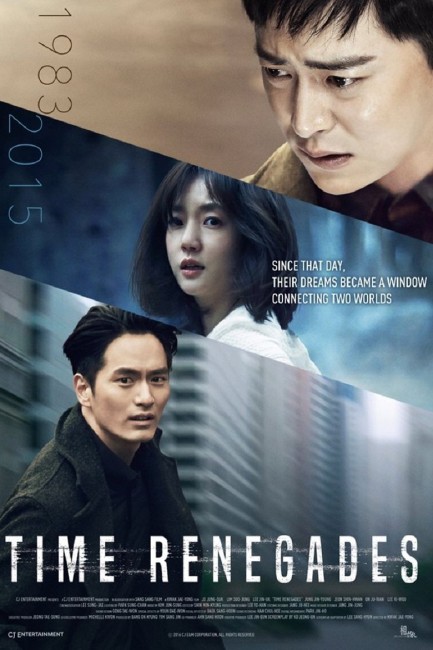 Gim Geon-U, a detective in 2015, and Baek Ji-hwan, a high school teacher in 1983, both begins to have vivid dreams in which they can see through each other’s eyes. Baek is engaged to the science teacher Seo-yun Jeong, while in 2015 Gim meets and becomes attracted to Seo-eun Jeong, a woman who resembles Seo-yun Jeong. Gim is tracking a wanted killer in the present-day. Through Gim’s eyes, Baek becomes aware that the killer who hides behind a black gasmask will strike at his school. He is unable to do anything as the killer claims Seo-yun Jeong. With Gim’s help, he realises that the man arrested as the murderer did not do the crime and that the killer will claim more victims. Armed with his foreknowledge of the future, Gim tries to find the killer but his doing so ends up changing the future.

The title Time Renegades suggests a very different film than the one we end up getting. The title seems to suggest a more adventure-oriented film – you imagine something like Time Bandits (1981) about the escapades of a group of lovable rogues across time. In actuality, the heroes of the story are far more sedate in their actions – respectively a school teacher and a junior detective, neither of whom could ever be said to even remotely defy their superiors, let alone act as ‘renegades’, which suggests a person who operates in defiance of conventional law or morality. Moreover, the ‘time’ aspects suggests a group of people travelling through time when in fact either character remains within their own time and merely develops an ability to see through the other’s eyes – at most, be able to influence some events.

In actuality, Time Renegades resembles more something akin to Frequency (2000) in which father and son Dennis Quaid and Jim Caviezel were able to communicate by radio across thirty years of time where their actions as they attempted to stop a killer ended up causing ripples in the timeline. There was also the South Korean Il Mare (2000) about letters exchanged across time, which underwent an English-language remake as The Lake House (2006), which used the same cross-time communication plot as Frequency but played it as a romance.

There is the same essential plot as Frequency here but where the medium of communication is the two central characters having an ability to see through the other’s eyes while dreaming. In effect, this takes Time Renegades closer to a clairvoyant thriller like Baffled! (1973), Eyes of Laura Mars (1978) or The Gift (2000), where people get clues or foreknowledge of events usually relating to the solving of a murder mystery. The time travel aspect does play out with some minor changes to the timeline, while the latter half develops out suspense in trying to track the killer based on knowledge of when his future victims are going to be killed.

I must say that Time Renegades does not do a particularly good job of developing this. Frequency did this much more cleverly as we saw a series of sharp twists in the way the cross-temporal communications would change things in the present. All we get here is a gymnasium not burning down and a happier future at the end. There is no particular whiplash twists. It may well be due to the fact that I was watching the film through subtitles – there were times I had difficulty understanding what was happening, like why Soo-jung Lim ended up being abducted in the present or the killer’s eventual explanation for everything.

Elsewhere, director Kwak Jae-young has mostly specialised in romantic comedies. A surprising number of these have fantastic elements including the ghost romance Windstruck (2004), Cyborg She (2007) about a romance with a time-travelling cyborg, My Mighty Princess (2008) about a superpowered college student, Crying Out in Love (2016) about messages from the future