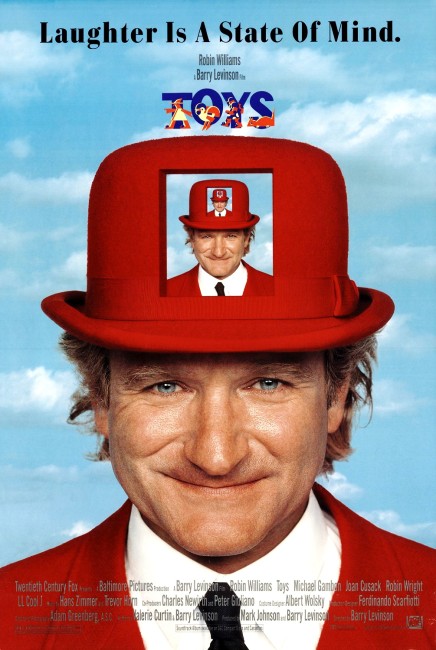 Before he dies, Kenneth Zevo asks his brother Leland, a three-star general, to take over his toy company, considering his own two children, Leslie and Alsatia, too frivolous for the job. Leland finds the board meetings tedious but upon hearing of industrial espionage leaps at the chance to introduce military-style security measures. Leland then takes over the factory for a top secret project and Leslie discovers he is designing a flotilla of remote-controlled tanks and planes, controlled by kids playing videogames, as a means of coping with post-Soviet Union military cutbacks. And so he and his friends mount an effort to stop Leland.

This is certainly one of the most delightfully offbeat films to come one’s way in some time – no wonder it was a total box-office flop in the US. One might almost describe this charmingly eccentric film as a post-Reagan, post-Soviet Union Willy Wonka and the Chocolate Factory (1971). Even comparison to Willy Wonka fails to come near to describing Toys‘ unique peculiarity. It is not unlike the monument of a giant bubble-blowing elephant positioned in the middle of a field in the film – an artifact that has been constructed as a colossal confection that sits with bizarre yet quaintly decorative incongruity at a studied distance from the rest of the world.

The film is almost overwhelmed by some of the most extraordinary sets ever designed for a film – a gigantic placard in the middle of nowhere that opens out as a colossal fold-up dolls house; a beautifully constructed model set of the Christmas-time streets of New York; Joan Cusack’s bedroom, which is constructed as a doll’s house with only three walls and a swan-shaped cocoon of a bed; a factory floor that has, in lieu of production lines, gumball machines spouting out products.

There is an extraordinary inventivity that has gone into the toys and costumes – like the bouncing ball that turns itself into a toy guitar player that hides a gun inside his instrument; or Joan Cusack who comes decked out in a series of dresses that make her look like a human ceramic doll, while Robin Williams gets to try out (literally) a smoking jacket and a coat that is a one-man sound effects synthesizer.

The film has a sense of humour that is genuinely eccentric. In one scene, Robin Williams and Michael Gambon are traveling by golf cart down a hallway and are made to stop by a person holding a sign saying ‘Duck Crossing’ and stop so that a train of toy ducks might emerge from a tiny doorway in the wall and cross to the opposite wall. It is a delightful throwaway gag that perfectly encapsulates the serene congeniality of the film’s humour.

There is an equally amusing running gag about L.L. Cool J’s disguises – emerging from a sofa, having disguised himself among the cushions, or placing a false pair of legs in a bathroom cubicle while hiding in the next one.

Some of the quaintly appealing images are even touching – like the two wind-up dancers that continue to circle after the conflagration ends or the toy of the man with the dog biting his bum that continues to walk on down the road outside the factory afterwards.

There are some good performances in the film – especially the dizzy nonchalant innocence of Joan Cusack, although crazy man Robin Williams seems uncustomarily dwarfed by the size of the sets. It is an extremely indulgent film – particularly so when one thinks how much it left its audience scratching their heads – but for the more offbeatly minded it is never an unwelcome film.

Toys has an interesting subtext about the state of the military-industrial complex following the downfall of the Soviet Union, and it does take seriously certain child psychology claims about the effect of war toys on children – here symbolically pitting war toys, which are used to represent military idiocy, against more anthropomorphic toys, which are symbolically chosen to represent innocence.

This charming effort was one of the few flops from Barry Levinson, director of Diner (1982), Good Morning Vietnam (1987), Rain Man (1998) and Bugsy (1991). Levinson has made several other films of genre interest:– the Sherlock Holmes pastiche Young Sherlock Holmes/The Pyramid of Fear (1985); the Michael Crichton adaptations Disclosure (1994), a thriller about workplace sexual harassment that features several scenes set in Virtual Reality, and Sphere (1998) about scientists investigating a crashed UFO that comes to manifest their deepest fears; and the Found Footage horror film The Bay (2012). Levinson also co-writes the script with his wife Valerie Curtin.