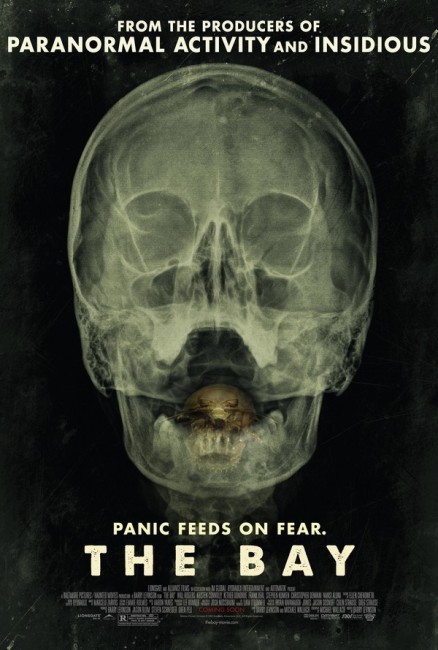 Video footage is pieced together of the ecological disaster that struck the seaside town of Claridge, Maryland on July 4th, 2009. Donna Thompson, a novice tv reporter who was on the scene, narrates what happened. As she was covering the July 4th celebrations, people everywhere began to come out with pustules over their body and fall ill. Video footage is pieced together of how some months earlier two oceanographers studying Chesapeake Bay discovered fish infected with mutated isopod parasites, before the two went missing and were found gored themselves. As the local hospital is overwhelmed with the infected and people begin dying en masse, Dr Jack Abrams contacts CDC and tries to find a cause of the outbreak. It is speculated that the isopods grew to giant size after excrement from steroid-enhanced chickens at the mayor’s nearby battery farm overflowed into the bay. Soon the entire town is deep in dead bodies.

Barry Levinson has a highly respected reputation as a director of mainstream films such as Diner (1982), The Natural (1984), Good Morning Vietnam (1987), Rain Man (1988) and Bugsy (1991). Levinson had ventured into genre material on a number of occasions with the likes of the Steven Spielberg backed Young Sherlock Holmes (1985), the wonderfully underrated gonzo flop Toys (1992) and the Michael Crichton adaptations Disclosure (1994) and Sphere (1998). The Bay is also produced by Oren Peli who spawned much of the current Found Footage fad as director of Paranormal Activity and oversaw its various sequels, as well as Greg and Colin Strause, directors of AVPR: Aliens vs Predator Requiem (2007) and Skyline (2010), and their Hydraulx (frequently credited as [Hy*drau*lx]) visual effects company (who also provide the effects), and Jason Blum, a partner of Peli whose Blumhouse production company would become a major player in medium-budget horror within the next couple of years.

The Bay is not strictly 100% Found Footage – at least, in the sense that most of the other films such as Diary of the Dead, [Rec] and others are, pretending to be one continuous stream of video footage taken while the central characters are running through the midst of the action. Barry Levinson takes more of a piecemeal approach, telling multiple stories using a variety of different video formats – from security camera footage, news broadcasts and CDC video conferences, as well as the reliable Found Footage standard of the camcorder in the middle of action. Levinson does cheat somewhat – including music on the soundtrack and flashbacks to from before the incident to footage of oceanographers and activists that is inserted for dramatic effect in a way that makes no chronological sense.

Barry Levinson achieves far more sobering and impressive impact than another Found Footage film like Cloverfield, which has a number of nominal similarities to The Bay. Where Cloverfield kept to monster movie cliches and had teen soap opera dramatics happening in the midst of the action, Levinson concentrates on depicting a widescale incident occurring from multiple points-of-view. His is about watching from a sociological perspective as something (it is often not quite clear what) starts happening. He also makes a point of including numerous cuts away to CDC conferences and previous footage from oceanographers analysing the isopods that makes this very much a credibly scientifically rooted menace.

The complaint you could perhaps make about The Bay is that Levinson seems less interested in horror movie effect – the effects of the mutant isopods and of the deranged infectees is only occasionally seen (and certainly contain some very impressive makeup and gore effects) but more often is only suggested or alluded to happening off screen. Levinson does get in a rather cliche shock effect at the end where one of the zombified townspeople pops up behind Kristen Connelly as she gets into a police car – its old hat but at least it gets a jump out of an audience in an otherwise fairly bloodless film. In this respect, The Bay emerges as much more low key than the creature feature you expect it to be at the ouset. Where it does work is as a Found Footage recreation of a 1970s ecological catastrophe film having been given a sobering modern overhaul.