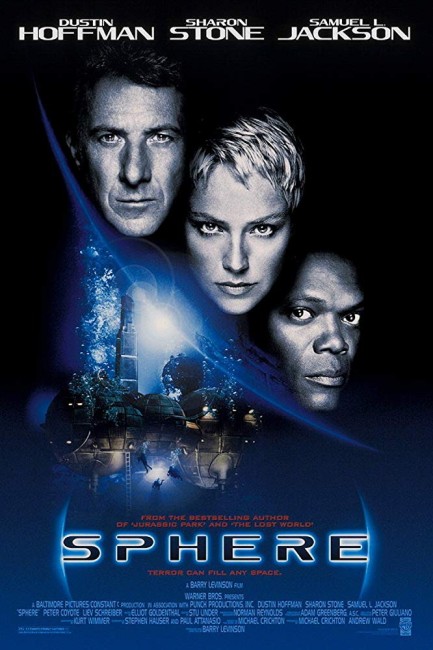 A team of scientists are brought to the middle of the Pacific where they are informed they have been selected as first contact specialists to investigate a crashed UFO that has been discovered on the ocean floor. Entering the craft, they discover it is in fact a ship from Earth’s future that has been thrown back in time through a black hole. At the heart of the ship is a mysterious sphere. After one of the team recklessly enters the sphere, the group find themselves in contact with an alien entity. Their ocean floor habitat comes under attack by jellyfish and giant squids that appear to have been manifested from out of their worst fears.

During the 1990s, nobody, with the exception of John Travolta, made a career comeback like Michael Crichton did. In the 1970s, Michael Crichton had a big hit with the film adaptation of his novel The Andromeda Strain (1971) and enjoyed further successes as a director with the likes of Westworld (1973), Coma (1978) and The Great Train Robbery (1979). After that point, Crichton’s star began to wane – the film adaptation of his best-selling novel The Terminal Man (1974) was barely seen, and his other directorial efforts – Looker (1981), Runaway (1984) and Physical Evidence (1989) – were ignored by all and sundry. Michael Crichton’s appeal was always founded in the post-2001: A Space Odyssey (1968) view of the future as a soullessly sterile, antiseptic world where humanity has been crowded out by its technology or where technology was in imminent danger of going out of control. After Star Wars (1977), this vision of a cold, sterile future was suddenly replaced by a gee-whiz enthusiasm for all things wondrous and Michael Crichton’s technological alarmism became outmoded overnight.

In The Encyclopedia of Science Fiction (1992), Peter Nicholls accuses Michael Crichton’s novels of reading like potential film scripts. Nicholls’ slightly cynical tone notwithstanding, there is some truth to the comment in that both Michael Crichton’s novels of Sphere (1987) and Jurassic Park (1990) were originally designed as film scripts. It is a measure of just how far Michael Crichton was out of Hollywood grace at the time in that none of these attracted any attention. Crichton then had the further ignominy of seeing a substantial part of Sphere appropriated by James Cameron in The Abyss (1989).

Jurassic Park however was a best-seller as a novel and attracted the eyes of Steven Spielberg who turned it into the mega-successful Jurassic Park (1993) and the rest, as they say, is history. Michael Crichton’s middle name suddenly became “author of Jurassic Park” and he found himself in the midst of a major career revival even bigger than the success he had had in the 1970s. Although Crichton never went onto reoccupy the director’s chair, there were major film adaptations of most of his books – Rising Sun (1993), Disclosure (1994), Congo (1995), The Lost World: Jurassic Park (1997), The 13th Warrior (1999), Timeline (2003) and the tv remakes of The Andromeda Strain (2008) and Westworld (2016– ) – and he also provided the original screenplay for Twister (1996) and created the hit tv series ER (1996-2009). The Jurassic Park credit alone was enough to propel Crichton from has-been filmmaker to one of the most cinematically popular contemporary novelists, rivalled possibly only by John Grisham.

Certainly, Sphere (1987) is probably Michael Crichton’s weakest book. In it, Crichton seemed undecided whether he was telling an alien contact story or a monsters from the id drama, while the ending where the protagonists simply wished the problem away was so absurd I threw the book across the room in frustration. Michael Crichton’s novels are fine for the scientific extrapolation and the depth of research Crichton places into them, but when it comes to characters Crichton is utterly flat. To return to Peter Nicholls’ comment above about Crichton’s novels reading as film scripts, it is not hard to see why one might think such as Crichton’s novels tend to make better films than books – film allows Crichton’s nondescript characters to be fleshed out with actors. Jurassic Park is an enjoyable page-turner but what made it as a film and phenomenon was seeing the dinosaurs in all their ferocious, living-breathing CGI glory.

Sphere is directed by Barry Levinson, of Diner (1982), Young Sherlock Holmes (1985), Toys (1992), Rain Man (1988), Wag the Dog (1997) and The Bay (2012) fame, as well as the previous adaptation of Crichton’s Disclosure. The script is from Paul Attanasio, creator with Barry Levinson of the finest series on tv at the time the film was made, Homicide: Life on the Streets (1995-9), and who also adapted (and improved) Crichton’s Disclosure for Levinson.

Sphere is an impressively well-made film – the unfolding of the alien contact scenes and the revelation of the alien’s identity are eerie and suspenseful. There is perhaps a little too much running around between ships, but the science and underwater scenes are conducted with an impeccable and impressive realism. Levinson and photographer Adam Greenberg invest the story with an increasingly claustrophobic tone that grips the imagination. The combined efforts allow a story that seemed fairly naff on the page to gain considerable credibility on screen. Levinson and Attanasio even manage to tone down and make the ending believable. There is also an excellent score.

Yet oddly, Sphere was the only Michael Crichton adaptation up to the point to have been a relative box-office disappointment. It is puzzling as to why Sphere died a box-office death, as it is a fine film. One suspects the reason for such is that it eschews big-budget special effects, which are synonymous with science-fiction these days, in favour of cerebral, psychological drama. There are no show-stopping scenes of mass destruction and the monsters that do appear are psychological rather than physical.

Michael Crichton is an oddly divided writer. On one hand, he has a fascination with technology – all his books come accompanied with graphs and diagrams – yet he is deeply sceptical of all this technology getting out of control. Underneath Crichton’s work runs a strain of pessimism. Crichton fears that human nature or simple human error will invariably cause things to go awry – be it a single strand of jammed computer tape nearly causing an entire viral containment facility to self-destruct in The Andromeda Strain; a epileptic becoming addicted to the electric shocks that are supposed to control him in The Terminal Man; or human greed causing unforeseen system foul-ups in both Disclosure and Jurassic Park; and machine error in Westworld. In Jurassic Park, Michael Crichton even manages to turn chaos theory – which is simply a mathematical paradigm for the impossibility of predicting behaviour in complex systems – into a variant on Murphy’s Law where things will invariably go out of control. In Sphere, Crichton’s themes are writ at their most visible.

One film that makes interesting comparison to Sphere is Contact (1997). Both Sphere and Contact are films about alien contact and human prejudice. Where Contact says that alien contact can offer the possibility of a consciousness-expanding entry into a wider universe but that to accept it we must overcome small-mindedness, Sphere, writ through with Michael Crichton’s usual doubts about human nature, is utterly pessimistic – holding the end view that humanity, given the miraculous ability to wish anything into being, will only manifest its deepest, darkest fears and that we are better off without such a gift.

People rushed to make comparisons between Sphere and other science-fiction films. There are undeniable comparisons that can be made to Forbidden Planet (1956), which involved a similar alien device that conjured forth repressed psychological fears, and Solaris (1972), which had scientists aboard a space station being driven crazy by a sentient planet’s manifesting forms from their unconscious in an attempt to communicate with them. A further point of comparison might also be the then-recent Event Horizon (1997), which, inside its thorough muddle of ideas, feels like it wanted to be what Sphere emerges as.

Of course, the one film that most rushed to compare Sphere to was The Abyss, being unaware that Sphere the novel predated The Abyss. Sphere and The Abyss make for interesting comparison. It may be heretical in light of the public disfavour given to Sphere to suggest that it actually works better as a story than The Abyss does, but it is a case I am willing to argue. The Abyss had some grippingly intensive moments of human drama but the alien contact angle seemed awkwardly jammed onto the end, and the final scene (in both the original cinematic release and the 1992 Special Edition) of the alien ship rising to the surface was a big anti-climax. Sphere works to a far more dramatically satisfying conclusion and certainly gives its alien contact theme a far more rigorous workout than The Abyss with its bunch of glowing, ethereal Spielberg castoffs who have come merely to wave nuclear disarmament flags does. Sphere is possibly a film whose merit will undergo re-evaluation in a few years time.

Other films adapted from Crichton’s books include:- the extra-terrestrial virus film The Andromeda Strain (1971); the neurosurgical Frankenstein film The Terminal Man (1974); Jurassic Park (1993); Rising Sun (1993), a superior adaptation of Crichton’s blatantly racist book about Japanese business practice; Barry Levinson’s adaptation of Disclosure (1994), Crichton’s novel about sexual harassment, which contains some sf elements; the lost world film Congo (1995); The Lost World: Jurassic Park (1997); John McTiernan’s The 13th Warrior (1999), an historical epic about the meeting between Vikings and Neanderthals; Richard Donner’s dull adaptation of Crichton’s Timeline (2003) about time travel to Mediaeval France; the tv mini-series remake of The Andromeda Strain (2008); and the tv series remake of Westworld (2016– ). Michael Crichton’s other works as director include:– Westworld (1973) about an android amusement park that goes amok; the medical conspiracy thriller Coma (1978); The Great Train Robbery (1979) about a Victorian train heist; Looker (1981) about virtual models; Runaway (1984) about a police force to stop amok robots; and the courtroom thriller Physical Evidence (1989). Crichton also created the hit hospital drama ER (1996-2009) and wrote the original screenplay for Twister (1996) about tornado chasers.

(Winner for Best Adapted Screenplay and Nominee for Best Musical Score at this site’s Best of 1998 Awards).