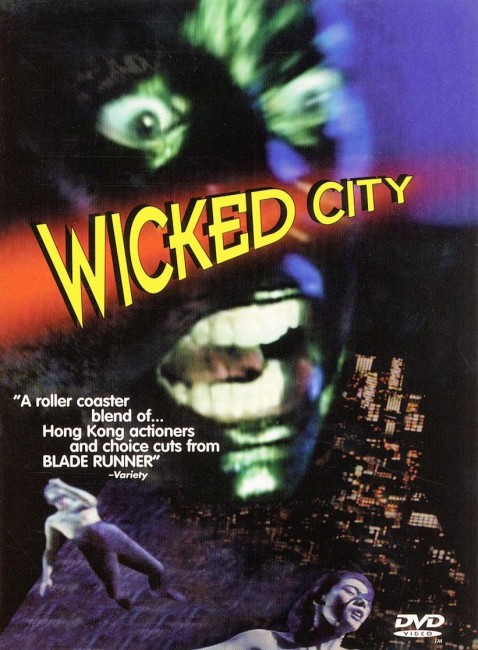 Lung is a member of the Anti-Monster Squad, assigned to fight monsters from another world that are capable of shapechanging and disguising themselves as humans. He is recalled to Hong Kong from assignment in Tokyo and asked by his chief to investigate a new drug called Happiness that is causing users to evaporate. Lung wants to investigate the businessman Yuen Tai Ching who he believes is a monster. The chief refuses to pair Lung with Ying, a fellow Squad member who is distrusted because he was born half-monster. Lung takes Ying with him anyway, confessing how he fell for a monster woman Gaye after she saved his life. He meets Gaye again in the course of infiltrating Yuen’s birthday party. Yuen is captured by the Anti-Monster Squad but they do not believe his claim that he is trying to create peace between the two worlds. Meanwhile, Yuen’s son Gwei, the real distributor of Happiness, takes over and infects Gaye with Happiness. The conflict and power struggles between the various sides emerges into an epic battle in downtown Hong Kong.

Wicked City (1985) was originally a Japanese novel by Hideyuki Kikuchi, who also created Vampire Hunter D and Demon City Shinjuku. The manga was in turn adapted into an anime film Wicked City (1987) by Yoshiaki Kawajiri, which promptly became a classic of the genre for its perverse sexual imagery – women with spider-legs, devouring vaginas and the like. This live-action version was then made in Hong Kong under the producing aegis of cult director Tsui Hark, best know for Zu: Warriors of the Magic Mountain (1983), Once Upon a Time in China (1991) and Green Snake (1993).

Of the two films, Wicked City 1993 is undeniably the lesser. There is the absence of perverse hentai imagery that fuelled the anime for one – the film is singularly lacking in images of vagina with teeth or the breasts of hookers swallowing people up. We do get the scene where the woman turns into a spider in the hero’s hotel room during the opening scenes but all of the associated sexual imagery there was in the anime version has been excised. (Although, to its credit, there is one perverse original sequence later in the film where we see Roy Cheung fucking a shapechanging woman monster who has turned into a bio-mechanoid pinball machine).

Moreover, the spider woman and all the other creatures and effects scenes that turn up throughout have been replicated on a B-budget and look cheap and cheesy. The plot follows at least the same general arc as the original – a secret agency that battles monstrous incursions from other dimensions; the hero falling for a woman from the opposing side; the conflict over an older man who is struggling to make peace between the two worlds. That said, almost all of the details and plot surrounding these things are wildly different in either version.

Mak Tai Kit was a minor Hong Kong director from this period who made a total of seven films, nothing else of any distinction. He shoots the entirety of Wicked City in the hyper-saturated pastel lighting schemes that became a cliche in Hong Kong during this period. For the most part, the monster scenes look too rubbery and rushed. The action/fantasy scenes lack the kinesis and wildness that come in the work of other contemporaries of this era such as Ching Siu-Tung and the film’s producer Tsui Hark.

That said, Mak Tai Kit does throw up some undeniably madcap sequences – a sequence in a hotel conference that involves Leon Lai being imprisoned by a character that wields neon day-glo tentacles from out of his eyebrows; attack by a flying chandelier; a female assassin that massacres people by animating and firing the pieces from a clock; her revealing that the drinks the people at the conference have drunken contain a liquid monster, which then promptly cause all of the attendees to throttle to death; Tatsuya Nakadai projecting his shadow self to attack; the group making an escape by car as the liquid monster attacks them, which they deal with by shooting the gas tank of another car and igniting it, leaving them driving out of the carpark in a burning car. It is a fabulous sequence, although one that is constantly let down in the imagination department by poor optical and CGI effects.

There is another similarly wild sequence with Michelle Reis and Roy Cheung throwing one another in mid-air between shipping containers; Cheung wielding laser claws that cut cars in half; she manifesting a massively long fist on the end of a tentacle; and Jacky Cheung coming into his monster powers as he drives and turning the limo into a giant-sized vehicle.

There is a crazed climax with characters caught inside an elevator, which is a shape-changing demon woman trying to devour them; Jacky Cheung grabbing her and turning her into a bio-mechanoid motorcycle and riding away on her; and climactic scenes fighting atop a plane in the sky over the city with people trying to force each other into the intake valve of the jet engine.