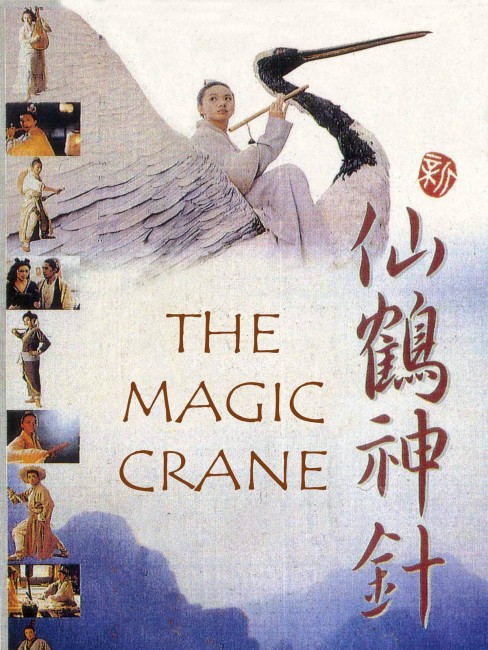 Ma Kwun Mo is part of a delegation travelling to a meeting of Shaolin martial arts schools when he encounters the beautiful Pak Wan Fai flying on a giant crane. She has lived in seclusion on a mountain all her life and has never met another man. At the same, she meets Butterfly Lam, who wields a mandolin capable of emitting deadly sound waves, and the two realise that they are sisters who were separated by their father at a young age. A bitter feud now ensues as the three become embroiled in the complicated in-fight for supremacy amongst the Shaolin schools.

The Magic Crane is another entry in the Hong Kong Wu Xia fantasy cycle that began with the likes of Zu: Warriors from the Magic Mountain (1983), A Chinese Ghost Story (1987) and Swordsman (1990), all of which had been either directed or produced by this film’s producer Tsui Hark.

By the point of The Magic Crane, all the basic moves – flying swordsmen, tree-bouncing acrobatics, mid-air combat – had been copied by numerous imitators. In order to attain some sort of originality, Magic Crane has to go to some wild extremes. The film gets way out with images of a giant flying crane and a battle with a giant turtle, or with one of the heroines who wields a mandolin that causes sonic waves to batter people and repels all attacks with her strumming. This results in a totally nutty climax with, amid all the rest of the usual fantastical martial arts, the villain wielding a giant cast iron bell that causes earth tremors. The battle is won when the crane does a kamikaze dive down into the mouth of the bell!

The Magic Crane is fun, although does gets extremely silly – like the slapstick scenes with the army playing hot potato with the lizard gillet. As is often the case with these films, the plot does not make a lot of sense. We are not sure what the fight for supremacy in the martial arts school is all about, nor the reasons why the father took one of the sisters away as a child.

Furthermore, there is the abrupt reversal in the middle of the film where one of the sisters, who had previously been played as villain, romantically takes up with the hero and he switches affections from the other sister who for equally cloudy reasons now becomes a villain.

Trailer with no English subs