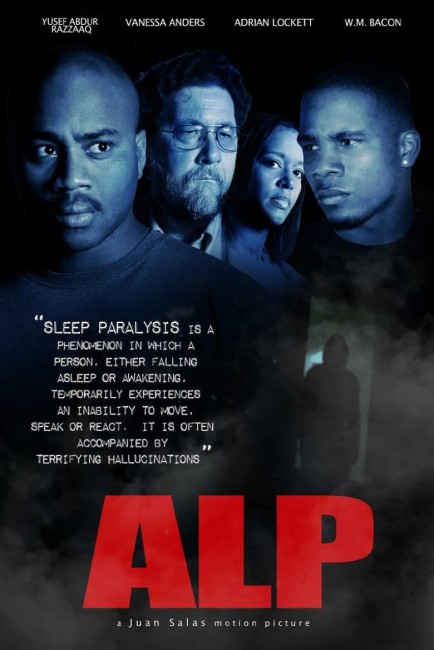 All his life Chris Henderson has been suffering from sleep paralysis and disturbing nightmares inhabited by a shadowy figure. His psychologist Jim Atterson urges him to return to see his family home in Tulsa before his brother Dave sells it. Chris travels there with his wife Trish and they spend the night in the house. Back in Dallas, Chris’s nightmares start to become worse. He believes he is being affected by an Alp, a demon figure from folklore. Chris’s nightmares becomes so disturbed that a frightened Trish moves out and Jim worries about having to commit him.

After seeing The Nightmare (2015), Rodney Ascher’s documentary about the sleep paralysis phenomenon, I made the comment at the time that it delved into a heretofore unknown arena that opened up fertile material for horror filmmakers. Surely enough, we have now started to see filmmakers delving into sleep paralysis themes with Alp being the first up followed by the likes of Be Afraid (2017), The Man in the Shadows (2017) and Mara (2018).

Alp is a directorial debut for Juan Salas so I suppose that I should not be as hard on it as a work by a seasoned professional. Keeping that in mind, Alp is still a production that looks and feels as though it is made by amateurs who have maybe just made it through the first year of a film school program. Most obviously, the film suffers from non-professional photography (the film has no credit for director of photography) where it often appears that Juan Salas is shooting using natural lighting. The acting often feels as though it has been conducted by non-professionals, the most notable offender here being W.M. Bacon as the psychologist.

Alp picks up the sleep paralysis theme but promptly lets it drop like a hot potato. It does almost nothing with it – we get a few scenes with Yusef Abdur Razzaaq lying in bed seeing a shadowy figure enter the room but this proves of little relevance to anything else that happens. The film appropriates the idea of an Alp from German folklore, a figure that appears and manipulates people’s dreams. (Traditionally, the Alp is not regarded as a demon, rather its name is believed to be a corrupted form of elf. The other oddity is that the Alp always appears wearing a hat, something it never does here). What we end up with feels like a bad A Nightmare on Elm Street (1984) copy.

The one effective scene we have is where Yusef Abdur Razzaaq and Vanessa Ander leave the house and return home only for Ander to tell Razzaaq some ten minutes of screentime later that he is still dreaming and that they haven’t left the house. This puts the film in an interesting state of rubber reality where you are not entirely sure whether they did leave or the subsequent events are a dream. However, the very next scenes show Razzaaq still in a dream and weaken this sense of eerie disconnect.

The film reaches an end that only leaves you confused. [PLOT SPOILERS] This leaves a number of plot strands open – like, for example, how the latter half of the film has Razzaaq’s brother Adrian Lockett and his girlfriend Lauren Brittany tied up in a cellar but at the end we are just supposed to forget about them. The end also leaves us confused about whether Razzaaq is a killer or not.

I also have to take issue with the portrayal of W.M. Bacon’s psychologist. He not only breaks patient confidentiality with two people but also prepares to commit Yusef Abdur Razzaaq to a psychiatric institution the moment he starts talking about the existence of demons. Surely, if believing in the existence of demons was cause to be committed, then the halls of mental hospitals would be filled with evangelical Christians.