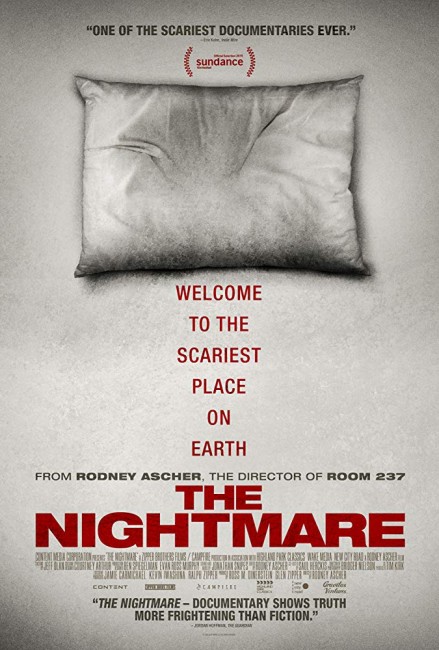 Rodney Ascher first appeared on the public radar with the documentary Room 237: Being an Enquiry Into The Shining in 9 Parts (2012). Ascher had made various shorts, both documentary and fiction, over the decade prior to that. Room 237, an exploration of some of the wacky theories concerning the meaning of Stanley Kubrick’s The Shining (1980), promptly became a cult hit after premiering at Sundance. After a brief detour to make the Q is for Questionnaire segment of ABCs of Death 2 (2014), Ascher next returned with The Nightmare.

With The Nightmare, Rodney Ascher tackles the subject of sleep paralysis and night terrors. This is a documented phenomenon in which in which those affected have woken, finding themselves unable to move and seeing disturbing shadowy figures of malevolent intent lurking over them. Ascher’s eight subjects recount their sleep paralysis experiences. All of them speak of the intense sense of fear that came from the feeling of lying helpless and unable to move. What is also striking is the commonality and recurrence of some of the descriptions about what happens and universal images that play out between their accounts (and others). Ascher himself had had sleep paralysis experiences beginning some fifteen years earlier and The Nightmare is a result of his discovering an online community of those who have had similar experiences and setting out to document these.

Throughout, Ascher offers no explanation of what happens, medical or psychological. There is not the usual thing you might expect in a documentary where the stories are broken up by interviews with experts, psychologists and medical doctors who explain why this is happening – Ascher simply creates a bare stage and allows the interview subjects to recount their experiences. That and a number of scenes where he has restaged some of the accounts using sets and actors.

There is the sense in all of this of eight individuals trying to cope with and find explanation for something utterly inexplicable that is happening to them. Indeed, all of the interviewees tend to scoff at the inadequacy of the explanations offered by medical/psychiatric professionals. At one point, the film cuts away to the Wikipedia entry on ‘sleep paralysis’ and a reading through this, which is clearly written by psychiatric professionals, could not seem further away from the frightening vividness of the accounts the interviewees give.

I hold a worldview where I doubt the reality of so-called spiritual phenomena and intangible entities like ghosts, spirits, demons etc. That said, there are undeniable times where the interviewees give accounts that suggest there is a vast other unknown realm out there into which they seem to have been given a unique perspective that makes you stop and think. Like the scene where Christopher Bleuze-Carolan was lying in bed and was told he was going to die by an eight-foot shadow man with red eyes only to wake up and the girl sleeping next to him say that she just had a dream in which she saw a black cat with red eyes talking to him in an incomprehensible language. Connie Yom makes the claim that when the night terrors came she called the name of Jesus, despite having no knowledge of Christianity, and has never been plagued by them since – she has now become a believer and is certain that they are signs of demonic activity. (As a result of her conversion, she now makes YouTube videos decrying gay marriage and transgenderism).

Similarly, Forrest Borie talks how he was in the woods with a New Agey girlfriend walking ahead who claimed to see a blue figure saying that all is good and not be afraid of the other entity, before seeing the blue entity too and then turning to find one of the shadow figures behind him and realising that the blue spirit was telling him not to be afraid of the shadow figure. You can detract a certain amount for subjectivity of experience and interpretation but it is enough to make you wonder exactly what is happening or how a highly subjective experience can seemingly be shared with others. Even then, The Nightmare leaves any conclusive answers dangling. I am sure there will one day be a rational explanation for what is happening – and one that harmonises and explains the interviewees’ experiences – but the film leaves your mind racing wondering what that could possibly be.

There is some crossover between what is discussed here and horror cinema. Comparison is made between the sleep paralysis experience and Communion (1989) where Whitley Strieber’s so-called real-life experiences are seen as incidences of night terrors rather than alien abduction (the greys common to alien abduction are also figures that appear during sleep paralysis). There is discussion where films like A Nightmare on Elm Street (1984) and Insidious (2010), even oddly Oliver Stone’s Natural Born Killers (1994), are cited as being created under the influence of sleep paralysis affected minds. Certainly, the anecdotal accounts of the material here seems far frightening than anything that most fiction writers manage to dream up – if nothing else, it feels like Rodney Ascher has tapped a rich vein of ideas that could make for some fascinatingly original genre movies. In fact, this was something we started to see not long after The Nightmare came out with the likes of Alp (2016), Be Afraid (2017) and The Man in the Shadows (2017).