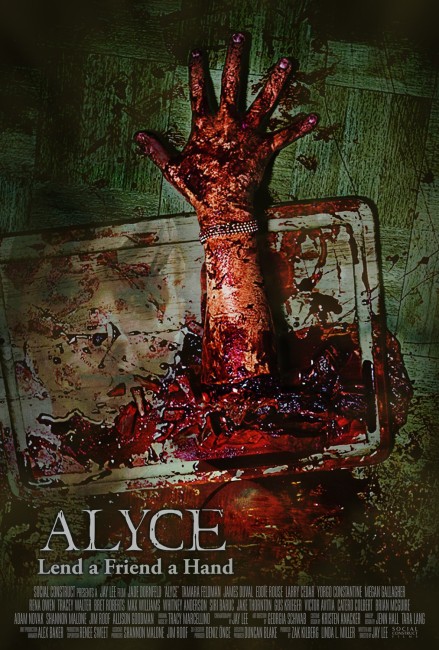 Alyce and her best friend Carroll go out to a club for the evening only to discover Carroll’s boyfriend Vince with another woman. Commiserating, Alyce and Carroll take some drugs together and get wasted. They go up onto the rooftop of Alyce’s apartment. Alyce comes around to discover that Carroll has fallen off the rooftop and realises that she pushed her. When the police come to her door asking questions, she tells them that Carroll was depressed about the breakup with Vince and went up onto the roof alone – only to then learn that Carroll did not die as she assumed but has survived the fall. She returns to Carroll’s drug dealer and requests some drugs. Her desire for more pushes her into extreme areas where she decides that Carroll has to be killed, where she engages in rough sex and then begins to kill those that have wronged her.

A few years ago, I was amused by Jay Lee’s Zombie Strippers! (2008), a tongue-in-cheek zombie film that fairly much lived up to its title concept. While nothing particularly sophisticated, it was enough for me to want to check out Lee’s other films. Lee had previously made two horror films with Noon Blue Apples/New World Order (2002) and The Slaughter (2006) and would subsequently go onto make Area 407: Part Two (2013), Deathchair: The Chair That Eats (2013) and House with 100 Eyes (2013). Lee also co-wrote and photographed the Bigfoot film Primal Rage (2018). Alyce was the film Lee made directly after Zombie Strippers!.

Jay Lee’s interpretation has been to place elements of Alice in Wonderland into a gritty, contemporary urban setting. We get an equivalent of the Mad Hatter’s Tea Party where Jade Dornfeld goes to visit a drug dealer and is made to strip in front of a trio of stoned people. Jefferson Airplane’s Alice-influenced White Rabbit (1967) plays early on into the piece, while Jade Dornfeld’s best friend Tamara Feldman is cheekily named Carroll Lewis.

However, the plot only vaguely connects in the general direction of Alice in Wonderland and you keep wishing that Jay Lee would make more out of it – at most we get Alice in Wonderland turned into a strange drug-filled journey into a dark mental space – and it takes a long time to ever get to any parts that have an equivalent in the book. The film suffers from a not terribly interesting lead-in – we get about half-an-hour of Jade Dornfeld and Tamara Feldman going out for a night on the town, coming home and getting messed up on drugs, the suggestion that they should make out (which never happens) and saying the word vagina a lot.

For a long time, Alyce feels like it is not going anywhere. There is the oddly amusing line – a death scene is described as “Like a bit of pre-War German Expressionism with a bit of Hellraiser [1987] thrown in,” the sort of line that could only be written by a genre fan. In about the last twenty minutes, Alyce abruptly and unexpectedly veers off into full-on horror territory. We get scenes of Jade Dornfeld bloodily beating people to death with baseball bats then carving up the bodies, rough sex scenes between her and Max Williams that turn into a battle for dominance, ending in a bloodbath of murdered bodies.