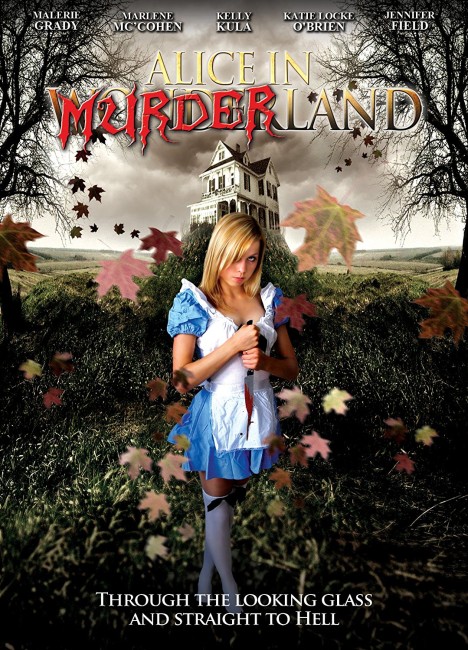 aka The Alice in Wonderland Murders

Alice is about to have her twenty-first birthday party and so her sorority sisters decide to throw an Alice in Wonderland-themed costume party for her. Her friend Mallory obtains the use of the Glass Building in which to hold the party. However, this makes Alice apprehensive as it is the building where her mother was murdered twenty years ago on this date. The party goes ahead with all men being banned at Alice’s insistence and everyone dressing as an Alice in Wonderland character. As the various bitcheries play out, someone dressed in a Jabberwocky costume starts slaughtering the attendees.

At least that is the promise. The delivery of the film itself turns out to be far from that. In actuality, Alice in Murderland ends up being a film where the idea it has vastly outweighs its execution. Indeed, it proves to be an utterly amateurish mess that promptly squanders any potential within the first few minutes. The film’s idea rapidly telescopes down to being not a horror/dark fantasy film set in Wonderland but merely an Alice in Wonderland-themed slasher film set in an everyday warehouse.

The characters are not variations of the ones in the book but merely a group of sorority sisters who have only decided to dress in Alice in Wonderland costume for a party. At most, their personalities vaguely correspond to their characters – The Red Queen (Marlene Mc’Cohen) is the class bitch; the equivalent of the Cheshire Cat (Kelly Pulcinski) is someone who keeps vanishing whenever people turn around to look for her; Tweedledum and Tweedledee are a lesbian couple consisting of a blonde airhead (Heath Butler) and a stoner (Jennifer Field); The Caterpillar (Elizabeth Lam Nguyen) is the class drug dealer and so on.

The film falls apart in the amateurishness of its delivery on most counts. Most of the cast seem capable but they are let down by the flatness of their dialogue. Even the gore looks fake. On a level of production polish, the entire film seems only one step up from a home-made shot-on-digital film that some friends have decided to make. The most ridiculous scene is the one where Kelly Pulcinski is trying to kill Marlene Mc’Cohen as she is trapped with her ass stuck out of a tiny bathroom window.