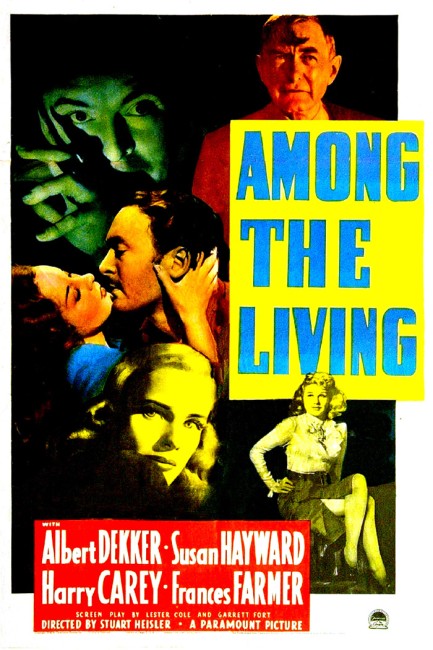 With the death of his father, a mill owner whose family founded the town of Raden, John Raden learns from the family doctor that his twin brother Paul did not die as a child, as he has been led to believe, but has been kept locked up after he killed their mother. Paul now makes an escape and goes into hiding at a boarding house in the town. There he becomes attracted to fellow tenant Millie Perkins. Meanwhile, Paul’s murderous tendencies make him the subject of a manhunt around the town.

Among the Living is an interesting venture into the theme of twins. It has been made as a psycho-thriller during the classic era of film noir. As such, it falls into the cliches of movie twins that dominated for a number of years – that twins would be divided between one good and one bad twin.

Stuart Heisler directs with modest effect, with the Southern setting adding a minor degree of atmosphere. Alas, Among the Living sounds a more interesting a film in synopsis – and is usually taken to be by film historians – than it ever is in actuality. The film looms with all manner of possibilities but fails to use the central twins theme for much, even the expected identity confusion themes. It never gets as dark and twisted as it suggests it might do, or should do.

Albert Dekker plays the bad twin with a child-like simple-mindedness. It is a melodramatic view of madness – and certainly one that does not hold much in the way of sympathy for the madman or even consider making any effort to redeem him.

The film has a creepy real-life mirroring in its star Frances Farmer subsequently ended up in psychiatric institutions. Similarly, Albert Dekker also died in a bizarre possibly auto-erotic asphyxiation incident. These are real-life stories that must have had something much more interesting than anything that is present in the film.

Director Stuart Hesiler had been an editor since the silent era. He made a number of dramas in a directorial career the 1930s and 1960s, moving into television in his later years. His only other genre film was The Monster and the Girl (1941).