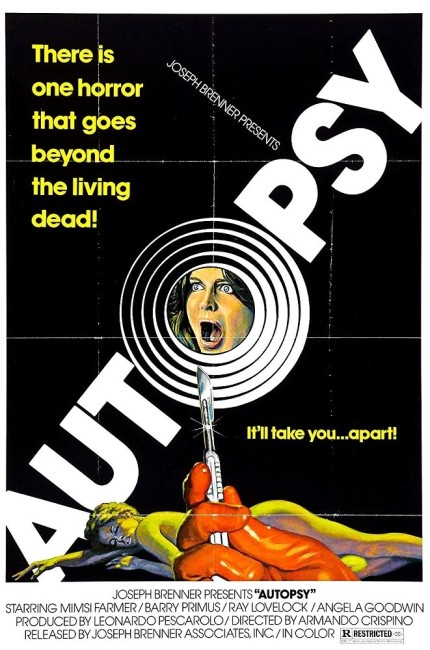 Simona Sanna , the daughter of an Italian father and American mother, has a job interning at a morgue in Rome. They are dealing with an increased number of bodies brought in due to suicides and murders caused by elevated sunspot activity. Simona is affected by the bodies she has to deal with and sees visions of them coming to life. This even affects her ability to have sex with her boyfriend, the racing driver Edgardo. They are visited by the Catholic priest Paul Lennox whose sister is one of the dead. Paul conducts an investigation of his own and believes his sister was murdered after dallying with Simona’s playboy father. As other deaths occur, suspicion points to various people, including Simona and Lennox.

Autopsy was a product of the extraordinary period of Italian Cinema during the 1970s/early 1980s where filmmakers decided to push everything to an absolute extreme, This was a period that produced the Italian zombie film, the Italian cannibal film and works that live on in notoriety like Cannibal Holocaust (1979). Like most of these others, Autopsy ran afoul of censorship issues, being cut of some fifteen minutes when it came to US release. (See Censorship Controversies).

The surprise about the film given its censorship issues and a title that makes a pitch for horror is that Autopsy isn’t a horror film. It seems to think it is but it also has an identity crisis where it is not sure what crowd it is appealing to and ends up an oddly unsatisfactory mix with feet in different camps.

Mimsy Farmer works an autopsy internship but keeps having hallucinations of corpses coming to life (these presumably being the scenes that caused censorship upset, although there is nothing particularly extreme to any of these scenes). This causes her to become sexually dysfunctional with boyfriend Ray Lovelock, although this may also have something to do with her developing an attraction to priest Barry Primus.

The other disappointment is that despite the title Autopsy and focus on Mimsy Farmer’s hallucinations, the autopsy scenes, her job and hallucinations have nothing to do with the film. The opening narration talks about the effects of solar flares on human behaviour but this has nothing to do with the film either. Everything eventually transpires as an ordinary murder mystery.

These scenes could be removed and not actually alter what the plot is about. They seem to have been inserted for the purpose of giving the show something that aims for the hardcore extremism that the other films of this era do. Even the museum where Angela Goodwin works at displays detailed blow-ups of old autopsy photos.

The film also has some sexual attitudes that take you back today. The men in the film act towards Mimsy Farmer in ways that would cause people informed by today’s elevated consent conversation to have a meltdown – boyfriend Ray Lovelock molests her in the car, random guys grab her as she walks through an alley, even her father comes up and greets her with an uninvited kiss when he meets her, while creepy co-worker Ernesto Colli actually tries to rape her and then just calms down and everyone seems to forget about the incident.