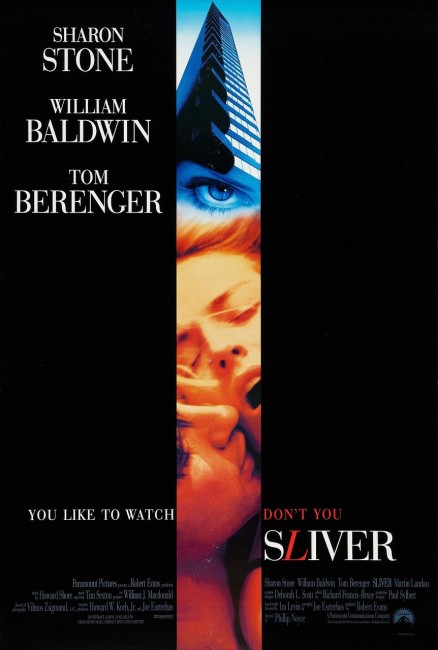 New York book editor Carly Norris applies to rent an apartment in a sliver tower and is surprised when her application is quickly approved. After she moves in, she discovers that the previous tenant died in mysterious circumstances. She meets two of the buildings inhabitants – Jack Lansford, a boorish writer of sex and violence thrillers that her firm publishes, and mysterious videogame designer Zeke Hawkins, who she discovers is in fact the owner of the building and has mined it with hidden video-cameras where he voyeuristically watches the intimate details of every inhabitant’s life. As she becomes involved with Zeke, both he and Jack try to convince her that the other is responsible for the killings of a number of women who have lived in the building and all look like she does.

Sliver seems to want to be Basic Instinct 2. It was released fourteen months after Basic Instinct (1992) was and gives all hallmarks of quickly being shipped into production as a copy. Beyond the mere obviousness of featuring Sharon Stone and more heated sex scenes, it even mimics Basic Instinct right down to the plot – with both films being set around someone doubting whether the person they are involved is a sex killer or not. (This is not terribly surprising as both films were written by Joe Eszterhas). The only difference is that Sliver places Sharon Stone in the Michael Douglas part instead of casting her as the femme fatale.

It it is a slickly made film but one that seems indifferently executed. The plot lacks tightness as a thriller. It does pick up briefly towards the end when Sharon Stone becomes drawn into William Baldwin’s voyeurism and we too feel some of the fascination with what he describes as a ‘real-life soap opera’. The video scenes look slickly exciting through the hi-tech finish given to the video room sets and, if nothing else, the marvellous flickering, changing and zooming tv console.

Sharon Stone Undressed (Again!) was made the big selling point of the film and what little interest there is comes from the admittedly heated and steamy sex scenes. However, in the US cinematic release some four minutes of these scenes were cut – although even with these in in the international print, the film generated little interest. Sharon Stone’s playing is neurotic and barely adequate, she only ever at all coming to life in (surprise! surprise!) the sex scenes.

The one person who does unexpectedly come to the fore in the film is William Baldwin who comes across with strikingly dark and handsome sexual charisma. (Although apparently he and Sharon Stone absolutely loathed one another on set).

Other Ira Levin film adaptations of genre note are:- Roman Polanski’s classic Satanic impregnation film Rosemary’s Baby (1968), The Boys from Brazil (1978) about a Nazi cloning conspiracy, the android housewife takeover film The Stepford Wives (1975), the whodunnit parody Deathtrap (1982), the remake of The Stepford Wives (2004) and the tv mini-series remake of Rosemary’s Baby (2014).