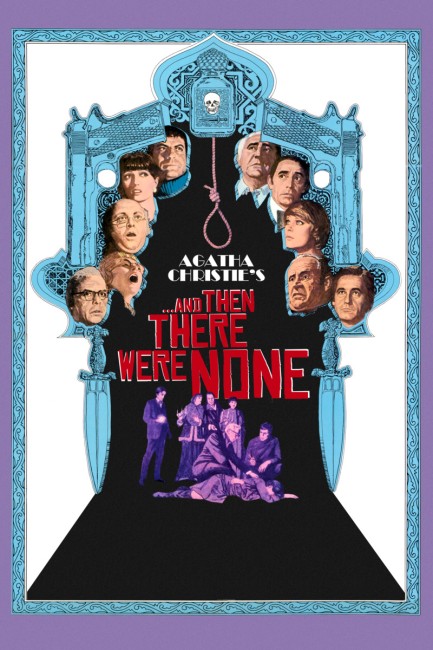 A group of ten people are brought to a remote, unoccupied hotel in the middle of the Iranian desert by the mysterious Mr U.N. Owen whom none of them have ever met. Once they are there, a tape-recording left by Owen is played informing them that each of them is guilty of a murder but has managed to get away with it. In every room is a copy of the song ‘Ten Little Indians’ and as the evening begins, members of the group are killed off one by one, just as in the song. They make the gradual realisation that Mr Owen must be one of their number.

And Then There Were None is included here because the play is a proto-slasher story – indeed, it may well have been the first thriller to use an isolated setting – a remote island lodge in the book/play, a seemingly abandoned Iranian hotel here – with an unseen killer in the group’s midst bumping members of the party off. The Italian giallo thriller definitely borrowed the model of this story – see in particular Mario Bava’s Five Dolls for an August Moon (1970) and Twitch of the Death Nerve/Bloodbath (1971).

Harry Alan Towers is a low-budget exploitation producer best known for his Fu Manchu adaptations – see The Face of Fu Manchu (1965) – his Jesus Franco collaborations and numerous horror/sexploitation films. And Then There Were None is only one of Harry Alan Towers’ B-movies with an A cast list. The film’s one novelty was in being able to go on location in pre-Revolution Iran and shoot in the huge Shah Abbas Hotel in Isfahan. Being the only Western film ever shot in Iran gives the film a certain novelty value but in all other respects And Then There Were None is drearily dull. There is much skulking around the hotel but this is sloppily directed by Peter Collinson. Crucially, the film never engages in any of the adroit, sharp-witted suspense for which Agatha Christie is renowned and the film’s only interest is in waiting to find out the identity of the killer.

Director Peter Collinson made several other psycho-thrillers with the fine Fright (1971), Hammer’s Straight on Till Morning (1972) and the remake of The Spiral Staircase (1975). Collinson is probably best known for the original The Italian Job (1969).