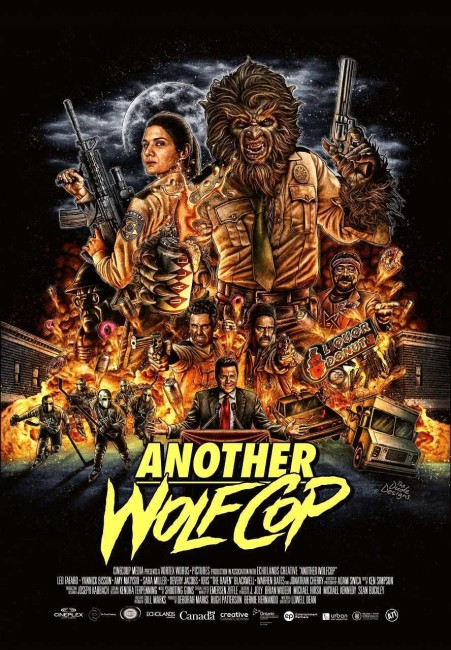 In Woodhaven, Lou Garou continues to fight crime as WolfCop. Millionaire Sidney Swallows has arrived in town and set up the Darkstar company in an old factory in order to produce the new Chicken Milk Stout drink. There is the hope that this will financially revive the town. At the same time, Lou’s friend Willie Higgins turns up after a mysterious disappearance. A talking creature then erupts out of Willie’s stomach. The town is being attacked by zombified creatures that Lou and Tina realise are being created by Chicken Milk Stout as part of Swallows’ nefarious scheme.

WolfCop (2014) was an amusing Canadian horror comedy from director Lowell Dean. It played a reasonable number of international film festivals and was obviously of sufficient success that Lowell Dean was given funding to make Another WolfCop. The sequel reunites Dean with the first film’s principal actors Leo Fafard, Amy Matysio and Jonathan Cherry.

While the first film was enjoyable, Another WolfCop has the feel of a film that was made simply because the first film was a success and people threw money at Lowell Dean to make more of the same. This is particularly evident during the first half of the film. There are assorted happenings – Lou trying to tame the WolfCop, the schemings of Sidney Swallows, a creature erupting from Jonathan Cherry’s stomach – but none of it ever coalesces into a plot. It is not clear even at the end what the villain’s scheme is meant to be, for instance. It feels like Lowell dean and co filmed a bunch of scenes with only a loose script in the hope that everything would come together in the editing room.

In fact, the lack of anything that comes together as a plot is still the case by the time the film ends. Some of the lame comedy relief scenes with Jonathan Cherry manifesting a creature from out of his stomach could well have ended on the cutting room floor. The climactic scenes seem set up solely for the purpose of placing the WolfCop into an ice hockey arena. Dean includes an uncredited cameo from Kevin Smith as the mayor simply because Smith was in town shooting a film and he was able to write some scenes around him.

On the plus side, the better budget means that this film has superior wolf effects than the first – the exception to this might be the rubbery and unconvincing creature that emerges from Jonathan Cherry’s stomach. What we have though is a shapeless film without any real plot or clear direction made with the hope that people would come to see it because they saw the first one. It feels like a wasted opportunity.

Lowell Dean had previously made a segment of the multi-director anthology I Heart Regina (2010) and the zombie film 13 Eerie (2013). Subsequently, Dean went on to make SF film SuperGrid (2018).