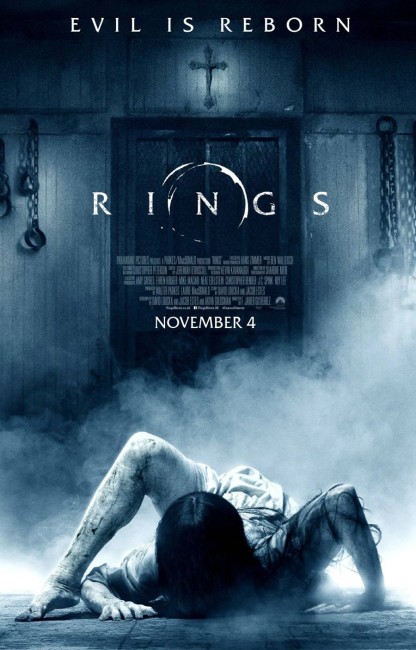 Julia sees her boyfriend Holt off to college but becomes concerned after their regular video chat sessions taper off. She then receives a call from the panicked Skye. Concerned, she travels to the university to find Holt. There Skye tries to get Julia to watch a video. However, a text from Holt warns her not to and Julie locks herself in the bathroom, only to see Skye killed as Samara appears. Holt explains how their professor Gabriel Brown has been conducting a series of experiments with the cursed video, each of them then getting others to watch to spare their lives. Realising that Holt will be killed unless he gets someone else to watch the video, Julia chooses to do so. However, when Holt and Gabriel go to make a copy, they find new details embedded in the video. Julia traces the images to the small town of Sacrament Valley, the final resting place of Samara. She and Holt travel there in search of clues about Samara’s father.

Ring led to the inevitable Hollywood remake The Ring (2002), which proved a reasonable success that produced a sequel The Ring Two (2005). More crucially, it also spawned a fad of English-language remakes of Japanese (and other Asian) horror films for a number of years after. This third The Ring film floated around for several years, initially announced under the title The Ring 3D in the immediate aftermath of the 2009 3D revival fad. Rings finally did emerge and only to middling box-office and a critical trashing.

The director assigned is Spanish director F. Javier Gutierrez who had only previously directed the critically acclaimed end of the world film Before the Fall (2008). Rings has on board Akiva Goldsman, one of the worst Hollywood screenwriters. Goldsman has ruined some great source works every time he has touched genre material – see his scripts for the likes of Batman Forever (1995), Batman & Robin (1997), Practical Magic (1998), I, Robot (2004), I Am Legend (2007), Winter’s Tale (2014), as well as his having produced Constantine (2005), Jonah Hex (2010), the tv mini-series adaptation of Arthur C. Clarke’s Childhood’s End (2015), Guy Ritchie’s King Arthur: Legend of the Sword (2017) and The Dark Tower (2017). He also has a bad habit of jumping on board successful pre-established franchises – Tim Burton’s Batman films, the tv series Fringe (2008-13), the Paranormal Activity series, the Divergent series, the Transformers films – where he either adds little to nothing or else grinds the series into the ground.

The question is after seven Japanese films and a tv series, a Korean film and two previous English-language films, just what is there left that the filmmakers think they could possibly wring out of a new Ring film? The answer would appear to be – not much. Indeed, when in the opening scenes, the characters are calling the VCR technology the film is based around ‘ancient’, it badly signals a series that has failed to keep up with the times.

The script tries to eke more of the same out of the basic elements – this time the characters are in search of Samara’s final resting place and her father. There is the mildly intriguing notion of a team of academic researchers using themselves as test subjects in an effort to scientifically understand the nature of the videotape but nothing is done with this idea after it is introduced. (About the only thing it leaves you wondering is why an academic would think giving his students a death curse would be a good idea and why Johnny Galecki is not hauled up by an ethics committee the moment his students start dying).

The rest of the show plods through the basics in desultory fashion. There are one or two appearances of Samara – less than you expect there to be. Much of the film is taken up by the quest to the town where everything is now rewritten to make a play for the all-important 18-24 demographic with the addition of good-looking teenage leads. As soon as the quest kicks in, the film leaves behind any attempt to engage with the creepy appearances of Samara or the weird peripheral happenings that we had in The Ring – indeed, the scenes with Matilda Lutz being trapped by blind Vincent D’Onofrio feel like the film is trying to copy the recent Don’t Breathe (2016). For all that the script has three writers credited, you feel that they have either been asleep on the job or engaged in a competition to mail their effort in by making the most minimal effort.