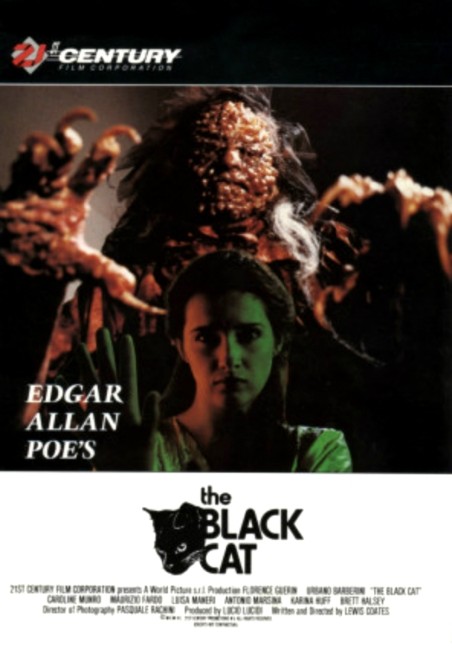 Anne Rivenna is an actress appearing in a film based on Edgar Allan Poe’s ‘The Black Cat’. Her husband, the celebrated director Marc Rivenna, announces that he is writing a new script based on the Three Mothers that appeared in Dario Argento’s film ‘Suspiria’ and will feature the witch Levana. However, as Anne prepares to play the role of Levana, she imagines Levana appearing to her, wanting to possess her and kill her baby so that she might gain form again.

Despite the title, and even the name of Edgar Allan Poe above the title – Edgar Allan Poe’s The Black Cat – this is not an adaptation of Poe’s oft-filmed short story The Black Cat (1843) about a murderer being given away when he accidentally bricks his wife’s cat up along with her body. Instead it is an Italian giallo psycho-thriller set around the making of a film version of The Black Cat. In fact, it is not even set around the making of a film about The Black Cat, as the film-within-a-film is more something that is happening in the background – and in the few glimpses we get of it, it seems a standard Italian slasher film that has nothing to do with Edgar Allan Poe.

What The Black Cat is based on – or at least pays homage to – is Dario Argento’s Three Mothers trilogy – which at the time only comprised Suspiria (1977) and Inferno (1980). Argento took twemty-seven years to get around to completing the third chapter of the trilogy Mother of Tears: The Third Mother (2007) with many thinking that he never would. The Black Cat hoped to cash in by purporting to tell the story of Mater Lachrymarum (The Mother of Tears), the Third Mother. As such, The Black Cat falls along the lines of one of Argento’s occult giallo films with various people being dispatched by a sinister supernatural force.

Alas, The Black Cat was directed by Luigi Cozzi. Cozzi is one of the hacks of the Italian fantasy industry. Cozzi’s work can sometimes be entertaining – Starcrash (1978) – but is usually terrible – Alien Contamination (1980), Hercules (1983), The Adventures of Hercules (1985) – and is always construed as ripoffs of other more popular English-language films. In the case of The Black Cat, it seems more a case of Cozzi not so much paying homage to Argento as acknowledging his betters. Argento is a master of style – he creates set-pieces consisting of wildly artistic over-the-top novelty deaths. Cozzi is lacking in any such artistry and all that The Black Cat has is crude shock effect – people coming up behind one another, hands bursting through a wall to grab someone and some very cheap optical effects with a hideous witch appearing in a mirror.

Conceptually, Cozzi is ambitious, conducting a challenging blurring between dream, reality and film. There is one good scene with the wife returning home, finding the repairman fixing the refrigerator then meeting the babysitter’s cousin, only for the babysitter to tell her that neither the cousin nor the repairman could come today. The film needed more scenes like that.

With the right push The Black Cat could have been a sharp The Player (1992)-like deconstruction or even parody of the giallo film, blending what is happening on screen in with the film that we are seeing being filmed say akin to Wes Craven’s New Nightmare (1994). Or even something like Lamberto Bava’s Demons (1985) with its meta-fictional mirroring between cinema screen horror and a zombie attack in the theatre.

Unfortunately, Luigi Cozzi’s ambitions of ideas exceeds his skill in delivering them and the results emerge more like a muddled A Nightmare on Elm Street copy. The ending is frankly bizarre – with the film suddenly turning into an epic battle between two mentally super-powered humans a la The Power (1968), followed by several cuts away to intergalactic planetary scapes borrowed from Cozzi’s Hercules films that almost transforms The Black Cat into a science-fiction film.