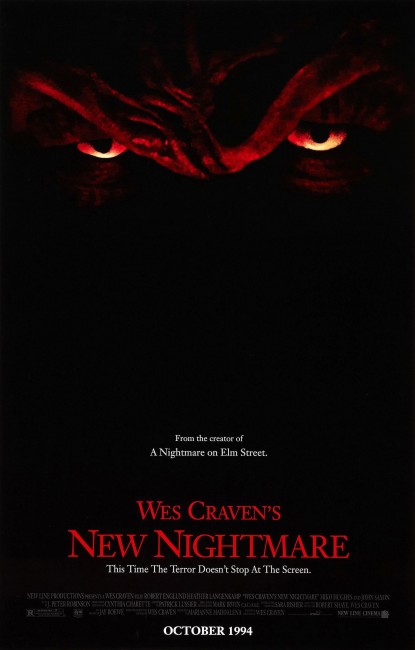 Actress Heather Langenkamp, star of the first ‘A Nightmare on Elm Street’ film, is approached by New Line Cinema about the possibility of starring in a new ‘Elm Street’ sequel. She wavers in her decision. At the same time, she becomes increasingly worried about her son Dylan who has dreams of Freddy Krueger. Her husband is then killed in the same way that she dreamt about beforehand. ‘Elm Street’ creator Wes Craven tells her that the first ‘A Bightmare on Elm Street’ film unleashed an ancient evil. It is an evil that lies buried and can sometimes be given form by great storytellers. Watering it down via the sequels helped contain it but it is loose again now that the sequels have ended. As she gave life to the character of Nancy that defeated Freddy in the first film, the evil force is now coming after her using Dylan as a gateway.

Remarkably, Wes Craven sets this version in the ‘real’ world where the original was only a film. Here Heather Langenkamp is playing herself and also wound in are appearances from Craven, Robert Englund, John Saxon and various New Line Cinema executives as themselves. Craven even adds in details from the real world – that Heather Langenkamp was stalked, that she has a son – but unnervingly blends these with fiction and the conventions of the horror film – such as killing off her husband and suggesting there is schizophrenia in the Langenkamp family.

In appearing as himself here, Wes Craven conducts a remarkable probing of his own thematic territory. In the film, Craven claims to write his films from his dreams and says “that he waits for his dreams to direct him.” Whether this is the case or not, it demonstrates a unique insight into Wes Craven’s view of his own creative processes and the reason why the dream world plays such an important role in his films. It is also Craven casting himself in a unique shamanistic role that allows him to recursively twist the creative act of writing and making a film, indeed the very act of viewing it, back on itself.

What makes Wes Craven’s New Nightmare so striking and original is the extent to which Craven invokes the self-conscious sense that we are viewing the film that is about to be made. In one scene, the camera focuses on Craven’s word processor, which describes the passage of dialogue that has just taken place and then says ‘Fade to Black’, which the screen promptly does. Or the remarkable end where Heather Langenkamp returns from her battle with the Freddy monster to find Craven’s script, entitled Wes Craven’s New Nightmare waiting for her, describing the last lines she is going to say to her son and how she then sits down to read the script to her son from the beginning as though it were the fairytale she were reading him earlier.

The scene where Craven tells her that the original film released something evil that the sequels were able to contain but which has now been unleashed again with the sequels coming to an end is an incredible piece of straight-face mythologising. (And, the more cynical might also note, a good excuse to make more sequels).

Where Wes Craven’s New Nightmare works less effectively is as a straight horror film. The actual horror element in the film is surprisingly low key. New Nightmare is a much more intellectual horror film than any of the other Elm Street series and this, along with its relative lack of blood and effects, may explain why New Nightmare was the least financially successful of the A Nightmare on Elm Street series. Certainly, Wes Craven does create a number of effective surprises – like the scene where all the caller’s single letter letters are found pieced together on the floor arranged to make the phrase ‘Answer the Phone’ just as the phone starts ringing.

Wes Craven’s New Nightmare is probably the most serious piece of acting Heather Langenkamp has done to date. Despite the strength of the role, she still fails to engage audience sympathy or create any depth. Craven’s find is Miko Hughes, who was also the undead kid in Pet Sematary (1989), who appears genuinely unnerving, walking about with taped-on finger gloves. The New Line executives prove rather flat as actors. [Notably missing is producer Rachel Talaly who had departed the series and gone onto greater success as director of Ghost in the Machine (1993) and Tank Girl (1995).] Robert Englund proves that, even when playing himself, he cannot give a straight performance.

(Winner for Best Original Screenplay at this site’s Best of 1994 Awards).