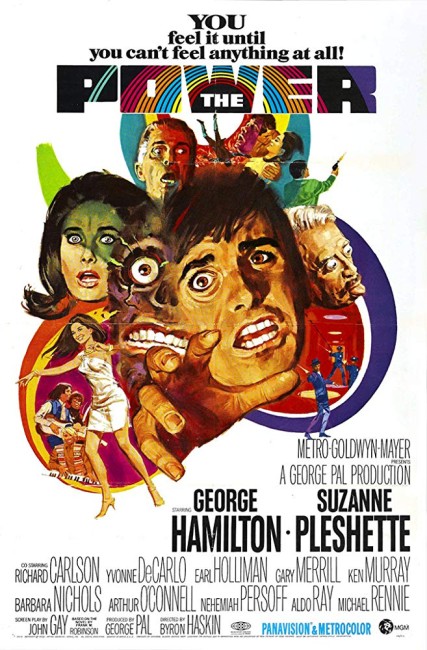 Seven scientists at a space research centre conduct a group experiment in psychokinesis. This reveals that one of their number is a mental superman who has vast psychic powers. As soon as this is discovered, the mystery superman starts using their powers to kill off all the other scientists in order to hide their existence. Forced to go on the run, one of the scientists, Jim Tanner, tries to follow a series of clues and discover the supermind’s identity before he becomes the next victim.

The Power was the penultimate film of George Pal. George Pal had had great success in the 1950s as the producer of genre classics such as Destination Moon (1950), When Worlds Collide (1951), The War of the Worlds (1953), Conquest of Space (1955), tom thumb (1958) and The Time Machine (1960). Into the 1960s, Pal had fallen into disfavour and found increasing difficulty getting projects off the ground. During the era he produced sporadic efforts, including the likes of Atlantis, the Lost Continent (1961), The Wonderful World of the Brothers Grimm (1962), 7 Faces of Dr Lao (1964) and this, which met with mixed success.

There were certainly a number of Pal projects mooted during his period – a Time Machine sequel, a When Worlds Collide sequel, an adaptation of Philip Wylie’s interesting novel The Disappearance where humanity is split along gender lines, the project that eventually became Logan’s Run (1976) and The Voyage of the Berg. The only other Pal film that made it into theatres following The Power was the campy superhero film Doc Savage – The Man of Bronze (1975) – and that was a widely regarded disaster that proved to be the final nail in Pal’s coffin. Pal died in 1980, ironically just at a time when science-fiction was coming back to screens in a big way and he was being touted as one of its founding fathers.

The Power is based on a 1956 novel by Frank M. Robinson, better known in the 1970s as writer of disaster novels, including the one that became the basis of The Towering Inferno (1974). For the film, Pal reteams with Byron Haskin who directed The War of the Worlds, The Naked Jungle (1954) and Conquest of Space for him, along with several other genre films (see below).

Despite the presence of George Pal, The Power is considerably less than the collection of talents involved. The story is dull, the dialogue wooden and the characters one-dimensional. The moralising tritely retreads the subject of the superman that everyone since Nietzsche has worn thin. The potentially interesting ideas of a mental superman remain unexplored.

Largely, the film is spun out as a thriller. Even then, the film is only centered around a series of unexciting action pieces – stock footage of fighters attacking a bombing range in the desert, a paranoid view of a fairground where George Hamilton thinks he sees a carousel and toy soldiers conspiring against him. Byron Haskin directs stolidly and even with such a promising given scenario never winds the enormous degree of suspense or paranoia inherent in the story up. There is a good yang t’chin score from Miklos Rozsa, which Haskin oddly cuts away to being played upon several occasions. It should be added that some genre critics do consider The Power to be a minor classic.