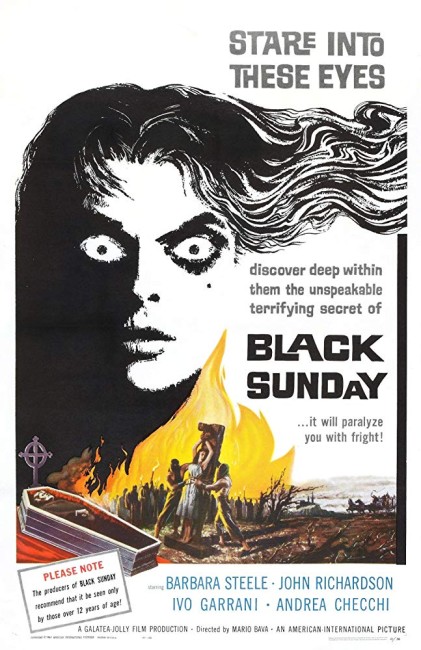 aka House of Fright; Mask of the Demon; Revenge of the Vampire Woman

In 17th Century Russia, Princess Asa is tried and convicted for vampirism and witchcraft. A mask with spikes on its inside is hammered over her face and she is burned at the stake. Two centuries later, the coach of Professor Choma Kruvajan and his companion Dr Andrej Gorobec crashes in the forest. They come upon the chapel that holds Asa’s coffin where she is kept imprisoned by the shadow of the cross coming through a window. Kruvajan accidentally revives Asa. They must then try to stop Asa as she attempts to possess her modern-day descendant Princess Katya.

Black Sunday is a genre classic. It was a success that produced a deluge of continental (primarily Italian) horror. Hammer had already fired up a massive Gothic revival with The Curse of Frankenstein (1957) and Dracula/The Horror of Dracula (1958) in the previous three years and in the USA Roger Corman had had similar success with a series of Edgar Allan Poe adaptations.

With Black Sunday, director Mario Bava defined a set the tropes that would become the Continental Gothic. As opposed to Hammer’s product, the Italian horror film placed an emphasis on sadism, particularly facial mutilation; and as, opposed to the Anglo-horror film, which is very much rooted in the battle between reason and suppression, the continental Gothic became a genre that was based in the past (most Italo-horror films are set in the early 19th Century or earlier) and firmly on the side of superstition – science and reason never enter into these films, there is rarely ever a Man of Reason like Peter Cushing’s Van Helsing. There were many imitators through the 1960s – directors such as Riccardo Freda and Antonio Margheriti – making similar films set in large gloomy castles and featuring necrophiliac minglings of death and love.

Most importantly, Black Sunday made Mario Bava a cult name with audiences. Bava had worked as a cinematographer and had uncreditedly stepped in to finish directing several earlier horror films – I Vampiri (1957), the very first film of the Italian Gothic horror movement, and Caltiki, the Immortal Monster (1959) – before debuting with Black Sunday. Bava would then go onto a number of other Gothic horrors – Black Sabbath (1963), Night is the Phantom/What! (1963), Kill, Baby … Kill!/Curse of the Living Dead (1966), Baron Blood (1972) – as well as giallo psycho-thrillers like Blood and Black Lace (1964), Blood Brides/Hatchet for a Honeymoon (1969) and Twitch of the Death Nerve/Bloodbath (1971). While many of these are excellent, Black Sunday would be a film that Bava never managed to subsequently surpass.

It is almost impossible to gain an appreciation of Black Sunday‘s atmosphere when seeing it on video – it needs a cinematic airing to give true voice to the extraordinary beauty of Mario Bava’s atmosphere and camerawork. For a period like 1960 when camera set-ups where still largely static, Bava’s camerawork is incredibly sinuous and fluid, always on the move. It is some of the most vivid and exciting black-and-white photography to be found in any film. Bava creates a haunted world where you never know whether it is day or night.

The shock opening with Barbara Steele being tied up, her back bared and the letter ‘S’ branded into her flesh, then the spiked Mask of Satan placed onto her face and hammered on with a crunch and a spurt of blood still holds some effect thirty years later. (It was this scene that had Black Sunday banned in the UK until 1968).

What is most striking is Mario Bava’s instinctive feel for Gothic mood – the scene where the prince appears out of the shadows and approaches the bed of Ivo Garrani is almost pure Castle of Otranto (1764). The most extraordinary sequence in the film is the luring of the professor to the castle, which is filled with images like the black coach appearing out of the mist and racing through the forest in slow-motion with Arturo Dominici on top maniacally whipping the horses along; and the luring of the professor into the castle where Dominici and his lantern move further and further ahead, while giant embossed doors boom shut unaided by human hand, slowly trapping the professor deeper and deeper into a claustrophobic maze of underground passages.

Although the film makes some claim to be based on the Nikolai Gogol short story The Vij (1835), there is virtually nothing of this in the finished script. The Vij was set around a night in a crypt as the hero waits for the witch to arise from her tomb while she marshals occult forces against him, a scene that is puzzlingly missing from the film. The main sequence of The Vij would have been perfect for the film’s extended climax, but is not used – in fact, the climax that Black Sunday has is oddly anti-climactic.

In subsequent films, Mario Bava showed himself to be a director less concerned with plot than with visual set-pieces and this is probably the problem. The script here seems oddly unbalanced – it, for instance, makes mistakes like having the vampires engage in ordinary fistfights with the heroes, which rob them of their supernatural menace; it also jumbles vampires in with what should be a straight-forward reincarnated witch story. Nevertheless, Black Sunday is a classic.

The film was purportedly remade as Black Sunday/The Mask of the Demon/Demons 5: The Devil’s Veil (1989) by Mario Bava’s son Lamberto, although this had almost nothing to do with the original here. The Nikolai Gogol story was more faithfully adapted as the Russian-made Viy (1967), the Yugoslav-made A Holy Place (1990) and the Russian-made Viy (2014).

Mario Bava’s other genre films are:- uncredited co-direction of Riccardo Freda’s I Vampiri (1957) and Caltiki the Immortal Monster (1959); the Greek muscleman fantasy Hercules in the Center of the Earth/Hercules vs the Vampires (1961); the giallo The Evil Eye (1962); the Gothic horror anthology Black Sabbath (1963); the Gothic horror Night is the Phantom/The Whip and the Body/What? (1963); the giallo Blood and Black Lace (1964) the Gothic Kill Baby … Kill/Curse of the Dead/Curse of the Living Dead/Operation Fear (1965); the sf/horror film Planet of the Vampires (1965); the spy comedy Dr Goldfoot and the Girls Bombs (1966), Bava’s worst film; the masked super-thief film Danger Diabolik (1967); the giallo Five Dolls for an August Moon (1970); the giallo Hatchet for a Honeymoon/Blood Brides (1971); the giallo Twitch of the Death Nerve/Bloodbath/A Bay of Blood/Carnage/Ecology for a Crime (1971); the Gothic Baron Blood (1972); the giallo/haunted house film Lisa and the Devil/House of Exorcism (1972); and the possession film Schock/Beyond the Door II (1977).