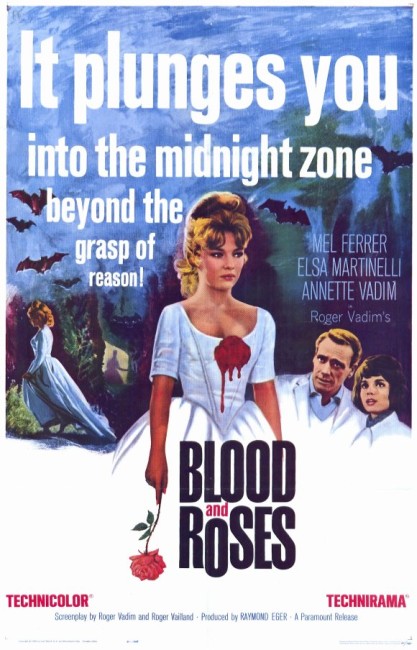 At the ancestral home of the Von Karnstein family in Rome, a masque is held to celebrate the latest descendant Count Leopoldo’s engagement. However, a fireworks display triggers off an unexploded WWII bomb, unearthing the tomb of the Von Karnstein’s vampire ancestor Mircalla. Mircalla emerges and now draws to her and possesses the mind of Leopoldo’s cousin Carmilla.

This was the second film made from J. Sheridan Le Fanu’s oft-filmed short story Carmilla (1872). (The first was claimedly Carl Dreyer’s Vampyr (1932), although the connection there is very slim). Blood and Roses comes from Roger Vadim, the French director of various softcore features in the 1960s such as the Brigitte Bardot breakthrough, And God Created Woman (1957) and the great softcore space opera Barbarella (1968).

Hammer Films had spurred off a substantial revival of Gothic horror with their twin successes The Curse of Frankenstein (1957) and Dracula/The Horror of Dracula (1958) and it seems almost certain that Blood and Roses was intended to ride that wave of success. Hammer Films themselves later spun off a series of Carmilla films, beginning with The Vampire Lovers (1970), with which inevitable comparisons arise. (See below for the Hammer films). The one thing that the Hammer comparison makes one realise is how much Terence Fisher et al tied Hammer’s vision of the Gothic to a specific period and time – when Blood and Roses updates the Le Fanu story in a modern setting one has to consciously jolt themselves to realise that the presence of planes, sports-cars and stereos is not anachronistic.

In contrast to the rich, flamboyance of Hammer’s treatment, Roger Vadim’s vampirism is a lot more soft-focus and softcore in intent. There is more eroticism than horror to the film (and British censors cut out much of the softcore lesbianism anyway). In fact, there is very little vampirism going on – there is a ludicrously tame scene where Annette Vadim pursues a servant girl that fades out just as Vadim closes in on her. Nor does the plot do much with the possession/vampirism themes.

The atmosphere Roger Vadim creates is occasionally compulsive – there are undeniably striking shots, like the lake lit up by fireworks, and, in particular, the surrealistic fevre dream that turns black-and-white with bodies swimming upside down outside French windows and an operation where the surgeon’s gloves are all tinted blood red. The beautiful photography, classy music, elaborate costumes and ornately layed-out gardens make for a sumptuously assembled film – but alas little more than that.

Other adaptations of Carmilla include:– extremely loose influence on the classic Vampyr (1932); the Italian-Spanish Terror in the Crypt (1963); Hammer’s trilogy consisting of The Vampire Lovers (1970) starring Ingrid Pitt as Carmilla, Lust for a Vampire (1971) with Yutte Stensgaard and Twins of Evil (1971) with twin sisters coming under the Karnstein influence; the Spanish The Blood-Spattered Bride (1972) starring Alexandra Bastedo; an episode of the tv series Nightmare Classics (1989) starring Meg Tilly; and the modernised Styria (2014) starring Julia Pietrucha.

Roger Vadim’s other genre films of note were:- the cult softcore space opera Barbarella (1968) with his then wife Jane Fonda, and the Metzengerstein episode of the Edgar Allan Poe anthology Tales of Mystery and Imagination/Spirits of the Dead (1968).