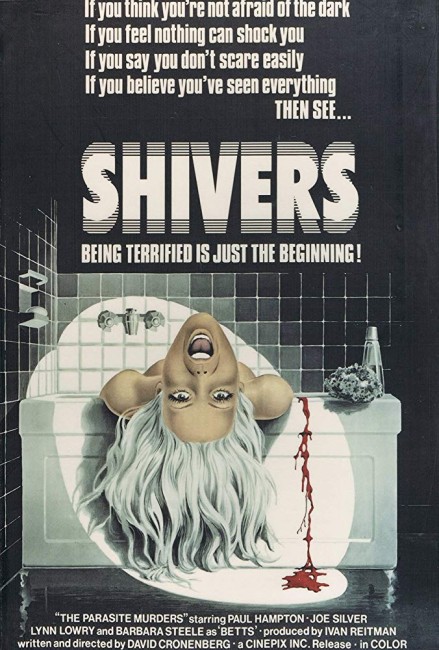 aka The Parasite Murders; They Came From Within

Roger St Luc, the house doctor at Starliner Towers, a new high-rise apartment complex on Montreal’s Starliner Island, becomes fascinated after he is called to the apartment of research scientist Emil Hobbes where Hobbes has gutted a teenage girl, poured acid into her stomach and then cut his own throat. St Luc discovers that Hobbes was working on a parasitic organism designed to eat and replace diseased organs in the human body. In order to test his theories about human sexuality, Hobbes has created a mutant version of the parasite and released it in the apartment. All over the complex, people are now being infected by the parasite, which turns them into flesh-devouring sexual fetishists.

Shivers is generally regarded as David Cronenberg’s first film. This is not the case as Cronenberg had previously made two extremely experimental arthouse films – Stereo (1969) about an experiment to develop and the surreal Crimes of the Future (1970) set in an infertile future – but almost nobody saw these and they remain difficult to find on video today. Shivers however was David Cronenberg’s first commercial success and the one that brought him to attention. Clearly, Cronenberg has sacrificed the more arty ambitions of his two earlier films in favour of commercial exploitation/horror elements. In fact, Shivers seems closely modelled along the lines of the zombified social apocalypse of Night of the Living Dead (1968).

There is the tendency among critics to read Shivers in terms of the complex metaphors about sex and the fusion of flesh and science that developed markedly throughout David Cronenberg’s later films. It is perhaps a mistake to overanalyse Shivers in this sense as it is intended as no more than a good solid horror movie. Certainly, Shivers is a gleeful dive into taboo breaking upon David Cronenberg’s part with he throwing in everything from cannibalism to infanticide, incest and lesbianism.

The first few minutes alone hold a highly attention grabbing scene – intercut with a calm and cool sequence where a young couple take a tour of the apartment complex – where a doctor grabs a teenage girl, gags and then strips her, cuts open her stomach, pours in acid and then slits his own throat. There are numerous effective shock images running throughout – a doctor tearing a parasite out of a victim’s throat with a pair of pliers; a parasite creeping up between Barbara Steele’s legs as she takes a bath; a child found feasting on her mother; a father that starts making out with his daughter. The plot is not structured so much as a story as it is a parade of scenes where people become infected and go rabid.

Of course, what sets Shivers apart from being merely another B exploitation film is the wild metaphors and images that David Cronenberg attaches to the story. Shivers is Night of the Living Dead construed as a satire on the 1970s swinger lifestyle. Lynn Lowry has a remarkable little speech at one point about hyper-eroticism: “I had a very disturbing dream last night. In the dream, I found myself making love to a strange man. Only I’m having trouble because he’s old and dying and smells bad and I find him repulsive. But then he tells me that even old flesh is erotic, that disease is the love of two creatures for one another, that even dying is an act of eroticism, that everything is sexual, that even to exist is sexual. And I believe him and we make love beautifully.” In this world of hyper-eroticism and hedonism, the parasite seems to sit as a rather funny image of lurking venereal disease.

Indeed the line about “disease being the love of two creatures for one another” could almost serve as by-line for David Cronenberg’s work. He loves the process of fusion and transformation into the Other. He has a clear affinity for mad scientists and is extraordinarily sympathetic to their causes. These themes are not so much apparent here as they are in later Cronenberg films – Shivers is an out-and-out science amok/social apocalypse film with no muddied morals about the issue. However, Cronenberg does throw in a remarkably plausible explanation for the parasites as being surgical symbionts designed to devour and replace diseased organs.

David Cronenberg’s subsequent films are:– Stereo (1969), a little-seen film about psychic powers experiments; Crimes of the Future (1970) set a future where people have become sterile and developed strange mutations; Rabid (1977), which repeats many of the themes of Shivers in the story of a vampiric skin graft; The Brood (1979) about experimental psycho-therapies; Fast Company (1979), a non-genre film about car racing; Scanners (1981), a film about psychic powers; Videodrome (1983) about reality-manipulating tv; The Dead Zone (1983), his adaptation of the Stephen King novel about precognition; The Fly (1986), his remake of the 1950s film; Dead Ringers (1988) about two disturbed twin gynaecologists; Naked Lunch (1991), his surreal adaptation of William S. Burroughs’ drug-hazed counter-culture novel; M. Butterfly (1993), a non-genre film about a Chinese spy who posed as a woman to seduce a British diplomat; Crash (1996), Cronenberg’s adaptation of J.G. Ballard’s novel about the eroticism of car crashes; eXistenZ (1999), a disappointing film about Virtual Reality; Spider (2002), a subjective film takes place inside the mind of a mentally ill man; the thriller A History of Violence (2005) about a hitman hiding under an assumed identity; Eastern Promises (2007) about the Russian Mafia; A Dangerous Method (2011) about the early years of psychotherapy; Cosmopolis (2012), a surreal vision of near-future economic collapse; the dark Hollywood film Maps to the Stars (2014); and Crimes of the Future (2022) set in a future world of surgical performance art. Cronenberg has also made acting appearances in other people films including as a serial killer psychologist in Clive Barker’s Nightbreed (1990); a Mafia hitman in To Die For (1995); a Mafia head in the vampire film Blood and Donuts (1995); as a member of a hospital board of governors in the medical thriller Extreme Measures (1996); as a gas company exec in Don McKellar’s excellent end of the world drama Last Night (1998); a priest in the serial killer thriller Resurrection (1999); and as a victim in the Friday the 13th film Jason X (2001).

Shivers is also notable for featuring as producer a young Ivan Reitman who would later go on to become a mainstream comedy director with the likes of Ghostbusters (1984), Twins (1988), Kindergarten Cop (1990) and Six Days, Seven Nights (1998).