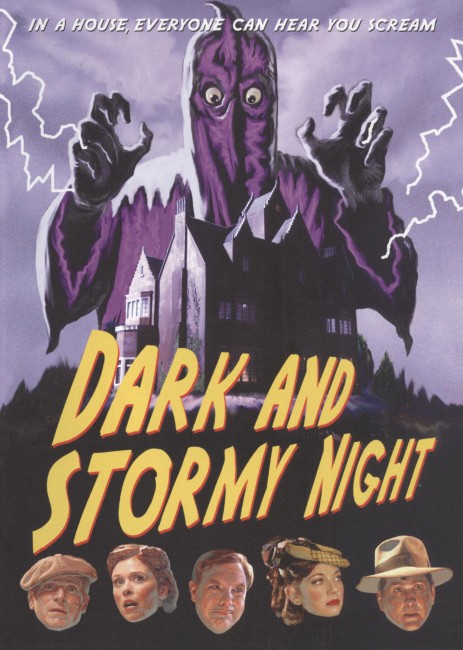 1930. On a dark and stormy night, a group of people gather at the Cavender House for the reading of the will of Sinus Cavender on the thirtieth anniversary of his death. A number of others also happen to turn up, claiming that their cars have broken down. The arrivals include 8 O’Clock Farraday and Billy Tuesday, competing reporters for the Daily Sentinel. They note that this is both the date that Sinus Cavender is said to return from the grave, as well as the 300th anniversary of the curse of Sarah Cavender. There is also a strangler lurking the moors killing women named Soo Soo. The will is read, leaving the entire estate to Cavender’s niece Sabasha Fanmoore. Just as the lawyer is about to read an addendum to the will, the lights go out and he is found stabbed and the document missing when they are turned back on. Soon after, Sabasha is abducted and a mysterious hooded figure starts eliminating the rest of the heirs present. Meanwhile, a doctor from a neighbouring asylum arrives to warn them that a mystery killer has escaped from custody and could be any one of them.

Larry Blamire is a filmmaker who should be a cult name. His films so far have bubbled just under the radar. Originally an actor and an occasional magazine illustrator, Blamire became an actor and soon turned to writing his own plays. Blamire then made his first feature film with The Lost Skeleton of Cadavra (2001), a spoof of 1950s B science-fiction movies, which enjoyed modest cult appeal. Other film work followed with the gangster spoof Johnny Slade’s Greatest Hits/Meet the Mobsters (2005), another 1950s B movie spoof Trail of the Screaming Forehead (2007), the web-series Tales from the Pub (2008) and the inevitable The Lost Skeleton Returns Again (2009), as well as co-wrote The Witch Files (2018).

With Dark and Stormy Night, Larry Blamire turns his attentions to the Old Dark House film, which was at its height during the 1920s and 30s with films such as The Bat (1926), The Cat and the Canary (1927), The Gorilla (1927), The Last Warning (1929) and The Bat Whispers (1930), among many others. Blamire does a knowing parody of the stylistic features of the Old Dark House film – the film is shot in black-and-white, right down to the introductory headshots of the cast as the credits open where the villain of the show is billed as ‘?’. Daniel Roebuck and Blamire’s wife Jennifer Blaire have fun playing off one another as a parody of the fast-talking reporters that were typical of the era.

Much of the plot has been construed as a riff on the oft-filmed The Cat and the Canary – the relatives gathered at the mansion for the reading of the will on the anniversary of the cranky old man’s death; the appointment of the young niece as heir and the immediate efforts to eliminate her and the others in line; the arrival of the doctor from the asylum with warnings of an escaped madman who could be disguised as any one of them; the masked killer lurking through the hallways and corridors. In particular, there is an amusing spoof of the iconic scene from The Cat and the Canary where the clawed hand comes out of the hidey-hole above the heroine’s bed, which here promptly turns into a game of patty cake between those present.

Dark and Stormy Night vies between a knowing and clever parody of a certain genre and its characters/cliches and what feels like a broad panto playing of the form. There is all the familiar ridiculously silly dialogue that you get in a Larry Blamire film. While Blamire gets the odd amusing zinger off every now and again, his dialogue seems more cornball than anything in the way he writes lines that constantly repeat themselves – “Better a death threat than a threat of death” and “everything with the thing about the thing they read when someone dies.” The scenes involving the round of reading the note that says “You’re next” or the characters repeating the question “Have I the letter?” “Have you the letter” are quite asinine. One of the more amusing of these is the attempts to get a description from Trish Geiger’s maid of her attacker where she keeps offering up the terrified variations of him as indescribably horrible.

The film becomes especially amusing towards the end with its absurd contortion of the various plot elements – like having two different hooded figures encountering each other in the halls and deciding to join forces, or the appearance of a cliche madwoman in the attic (Susan McConnell) who rants in a series of apoplectic insults clearly modelled on Tintin’s Captain Haddock.