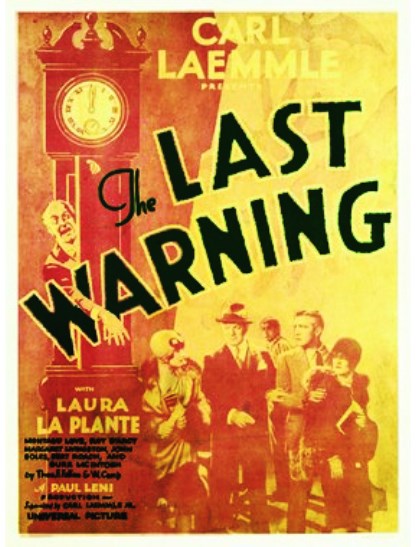 John Woodford, the owner and lead actor of Woodford Theater on Broadway, is killed in the midst of a performance. Many of those present are suspected – in particular, those involved in a complicated series of affairs around leading lady Doris Terry – but nobody is ever arrested. Five years later, Arthur McHugh plans to reopen the Woodford Theater and reunites Woodford’s cast and company. As the group settle in and begin to prepare, they receive a series of anonymous notes containing dire warnings of what will happen if they reopen the theatre. As they become aware, the original killer is amongst the group and now begins to kill those present.

The Last Warning was one of the films of the great and largely unrecognised German director Paul Leni (1885-1929). In Germany, Leni had made the cross-historical film Waxworks (1924), a classic in the Expressionist style of the German silent era where Conrad Veidt gave a memorable performance as a mad Ivan the Terrible. Leni was then brought to Hollywood by Universal president Carl Laemmle Jr where he made the stylish Old Dark House thriller The Cat and the Canary (1927), which had been a big hit and created a number of copies. Leni followed this with the Charlie Chan film The Chinese Parrot (1927) and the sensational historical horror The Man Who Laughs (1928) featuring another great performance from Conrad Veidt. The Last Warning was Leni’s final film before his promising career was cut short by his death of blood poisoning at the age of 43 only a few months after The Last Warning premiered.

The Last Warning is adapted from a 1922 play by Thomas R. Fallon, which in turn was taken from the Charles Wadsworth Camp mystery novel The House of Fear (1916). Leni has clearly been given orders by Universal to go away and make another The Cat and the Canary. Though the locale has been moved from a big old mansion to a disused Broadway theatre, the plot is fairly much the same – an unknown figure skulking around in the shadows eliminating a gathered group of people. Furthermore, the film also reunites Leni with his The Cat and the Canary star Laura La Plante. Leni even offers up a repeat of the scene where a hooded figure emerges out of a hidden panel to menace the unaware La Plante.

The Last Warning is not quite as visually extraordinary and innovative The Cat and the Canary was. Nevertheless, Paul Leni gives it his all. The opening montage of Broadway – one where Leni has clearly drawn influence from F.W. Murnau’s Sunrise: A Song of Two Humans (1927) – is vibrant and alive, the theatres illuminated in neon and dancing can-can girls shot through refracting lenses.

The sets for the theatre – which in fact reuse of the Paris Opera House set that was built by Universal for The Phantom of the Opera (1925) – look amazing. In the opening scene during the performance of the play, Leni’s camera sits at the base of the theatre boxes looking directly up at the faces down peering over the edges – a perspective you never see in films that take place in theatres. Leni gives us exciting action scenes with people scaling the outsides of the boxes in pursuit of the masked killer – even scenes where the camera is mounted on ropes as it joins people swinging down (quite a daring shot considering how bulky cameras of this era were). Immensely exciting stuff.

The story is a negligible murder mystery and the eventual revelation it builds to one of indifferent effect. That said, Leni tricks it out with all the melodramatic devices he can – notes threatening dire consequences left all over the place; doors opening/closing with ominous effect; drawers being shoved open of their own accord; a fire that breaks out; spiders dangling; a set of stairs strung over the stage nearly falling down on someone seated below; people peering through hidden panels; cat’s eyes in the dark and so on. A lot of these feel old hat devices today but 90 years ago many of them would not have been.