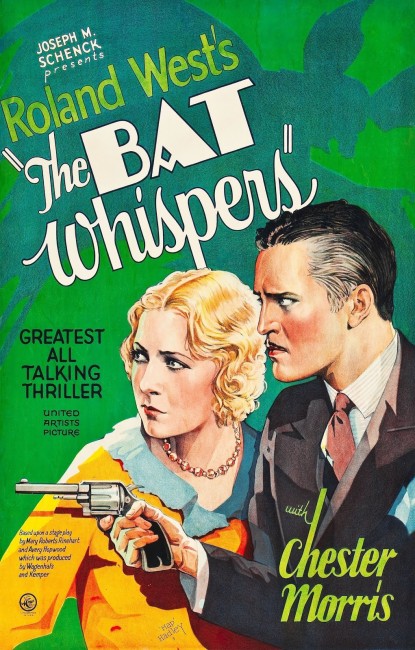 The city is terrorised by a masked criminal known only as The Bat. The Bat conducts a daring raid of a millionaire’s home to steal a necklace while police are guarding the house. Socialite Cornelia Van Gorder settles into a rented country mansion where she is joined by her niece Dale and others. However, The Bat lurks as one of the group and starts to kill people as he seeks the proceeds from a bank robbery hidden in a secret room in the house. The others try to work out which of the guests and visitors is The Bat.

The Bat Whispers falls into a genre of films that were big at the end of the silent era – this author has given them the name of Old Dark House thrillers – along with other films such as The Unholy Three (1925), The Cat and the Canary (1927), The Gorilla (1927), The Unknown Terror (1927) and The Terror (1928). Most of these were based on stage plays and usually set in old mansions and feature a heroine and several comic characters being menaced by a masked figure. They are interesting in that, while many spooky elements are regularly evoked, they in actuality eschew any element of the supernatural, usually revealing the proceedings to be mundane in an absurdly contrived twist of the plot.

The Bat Whispers is based on the book The Circular Staircase (1908) by murder mystery writer Mary Roberts Rinehart. This was filmed in a lost silent film version The Circular Staircase (1915), Rinehart then adapted the book as the play The Bat (1920), which was a great hit on Broadway. This was filmed as The Bat (1926), the first of the Old Dark House films, which is notable for Roland West’s extraordinary visuals. The first few yeas of the sound era saw many of the hits of the silent period remade with the benefit of dialogue and The Bat Whispers was a sound remake of The Bat. The play was later remade as The Bat (1959) with Agnes Moorehead and Vincent Price.

The Bat Whispers is still essentially a stage play. It is as much a comedy as it is a thriller. There is a good deal of knockabout comedy, which is conducted with a great deal of energy by director Roland West and his cast. Maude Eburne in particular is hilarious as the panic-prone maid. Even though there is no music score (this was made only three years into the sound era), the film has a wonderfully snappy pace, bouncing between humour and sinister stylised effect without a misstep.

The Bat Whispers was the first film to perfect the concept of the mobile camera – cameras at the time were enormous and cumbersome and shots were almost always static. The dollies used here almost entirely lift the film free of any stage origin and give it an extraordinary visual fluidity and dynamism, one that is still exciting today despite seventy years of cinematographic sophistication. The opening shot pulls back from the interior workings of a clock in a clocktower, drops straight down to street level and then moves across the street to a police station. In the next scene, the camera zooms from ground level up a wall to a second story room and through a window into closeup on the document a man is reading – all in one shot. There is a breathtaking aerial shot cruising down an avenue of trees lit up by lightning to close in on the frontispiece of the mansion. Later when the detective runs down the avenue, the camera physically follows, leaping over the balcony balustrade and running along behind him.

The principal footnote The Bat Whispers has in cinema history today is that it was purportedly the inspiration for Bob Kane (or perhaps more correctly Bill Finger) to create Batman. You can see what exactly inspired Kane, or at least gives people reason to make the claim – The Bat skulks about as a masked figure all in black with fake bat wings, which Roland West lights so as to cast a giant stylised shadow. The scene where The Bat appears and stalks toward the camera holds a genuinely eerie frisson. Although this does mean that the actual source for Batman must be this film’s undeniable influence of Louis Feuillade’s silent serials, Les Vampires (1915) and Judex (1916), which featured skulking masked villains and elaborate criminal plots – as well as the stylised Expressionistic lighting schemes of The Cabinet of Dr Caligari (1919).

There is an amazing ending where the curtain comes down on the show (again clearly revealing the stage origins) and then someone appears to address us, asking us not to give away The Bat’s identity otherwise it will make The Bat angry and he will start killing at random and that The Bat promises not to kill or steal from any viewer if they keep the secret. (Although, if the truth be known, The Bat’s identity is given away well before the ending by the way the film focuses on the unnerving stares of the actor playing The Bat’s alter ego). However, such a coda is incredibly cute.