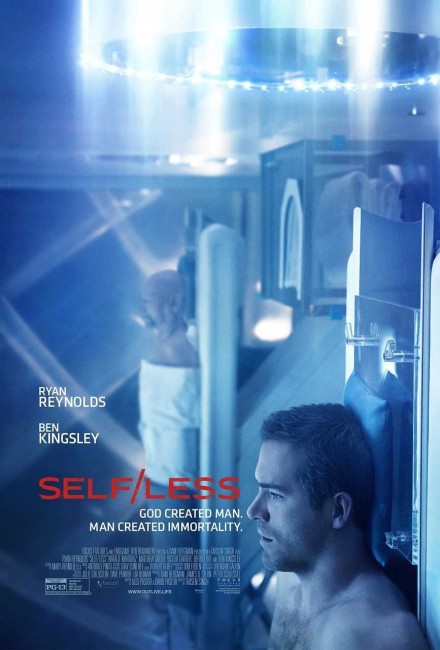 Damian Hale, a wealthy New York property developer, has been diagnosed with cancer. He then finds he has been slipped a card that directs him to the top secret Phoenix Organisation who offer to place his mind into a new younger body. As his health worsens, Damian agrees to undergo the process. He winds up his business affairs, his death is faked in a New Orleans cafe and he awakes in his new body. As he adjusts to the new life, he has flashes of memory where he is with a family and in military service but is given pills that he is told will counter these. Obsessed by these memories, he tracks down a location that appears in one of the memories to St Louis and makes the discovery that his body has not been grown new as he was told but one where somebody had to die so that it could be appropriated. He discovers that he had an entire other life as Mark, including a wife Natalie, and how Mark sacrificed his life to provide the money for his daughter’s health. His being there has also displeased the Phoenix people who now come determined to eliminate him and Natalie.

Tarsem Singh is one of the most extraordinary and stylish directors at work today. He had spent a decade working in commercials and music video before he first appeared with The Cell (2000), a fairly routine plot about a psychiatrist entering the mind of a serial killer that was propelled into the arena of the astonishing by Tarsem’s visuals. He took several years to return with his most amazing work, The Fall (2006), a fable that was shot in numerous exotic locales around the world that provided it with a unique and fantastical series of visuals, all without the need for special effects. In more recent years, Tarsem has been treading an increasingly mainstream path, making the Greek myth film Immortals (2011) and the Snow White adaptation Mirror Mirror (2012), both flawed works that are nevertheless propelled into something unique by Tarsem’s visual acuity. He subsequently went on to make the reworked Wizard of Oz tv series Emerald City (2017).

One should always anticipate a Tarsem Singh film because he produces a sumptuous feast like no other director when it comes to sets, cinematography and costuming. Self/less comes from a script by Spanish brothers Alex and David Pastor who are impressive enough directors in their own right with Carriers (2009) about a plague outbreak and The Last Days (2013) wherein the world suffers from a catastrophic malady of agoraphobia, as well as created the tv series Incorporated (2016-7) about a future dominated by monolithic all-powerful corporations.

Here the Pastor brothers have simply chosen to offer up an uncredited remake/updating of the classic John Frankenheimer film Seconds (1966) wherein a middle-aged businessman is contacted by a shadowy organisation that offers him a chance for rejuvenation and a new life, which he undergoes to end up in the body of Rock Hudson. Seconds is a classic work – what makes the film is both its bleak outlook and Frankenheimer’s use of extraordinarily experimental cinematography. It has been mentioned as a potential remake sporadically over the last few years.

I have to say I was hugely disappointed with Self/less. The most noticeable thing is that Tarsem Singh has dropped the highly distinctive visuals, cinematography and costuming that marks all of his other films. There are a couple of eye-catching shots of planes flying overhead but the only thing that stands out is how unexceptional a film it is visually. Tarsem gives us car chases and shootouts but when you consider the amazing things he has done in almost every other of his films, the opportunity for such an extraordinary visual stylist to reinvent hackneyed and overused sequences rather than merely serve up more of the same seems a heavy disappointment.

The result is merely a thriller/action movie that could have been made by almost any other everyday commercial director on the block. You exit thinking “Tarsem gave up his touted Marco Polo production to make a run of the mill thriller that any other director out there could have delivered? What a waste of great talent.” It reveals the case of the Emperor’s New Clothes that exists when it comes to Tarsem Singh – where it seems that his visuals have been the sole thing that have driven his other films and, once stripped of these, the films are routine commercial product.

All of this might even have been tolerable if Self/less had been halfway engaging as a story. The sad news is that it isn’t. Seconds did amazing things with its story in the visuals and in its extraordinary bleak ending. All that we have here seems to be the basic set-up of Seconds having been turned into a chase movie.

There have been other films out there that have conducted striking and original treatments of these same bodyswap themes – most notably Transfer (2010), which had an elderly racist German couple forced to deal with being transferred into the bodies of Black African hosts and then both parties conspiring together to subvert the system, or even the B-budgeted Xchange (2000), which maps out a fascinating future where such bodyswap is commonplace and has the hero chasing the person who has stolen his body. Or Brandon Cronenberg’s Possessor (2020) about bodyswapping assassins.

Self/less seems to have nothing in its conceptual arsenal other than the protagonist becoming shocked at the realisation that his body was recycled from a living person and then spending the rest of the film running around trying to avoid being shot. There are few surprises in the big, predictable story arcs that the film sets up for itself. I just expected more from Tarsem Singh than a generic chase movie.