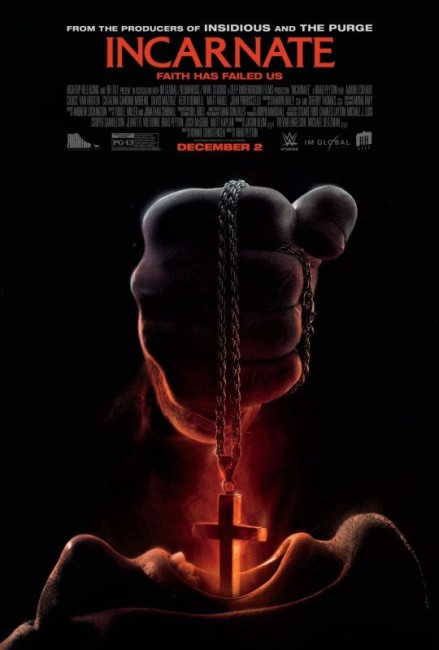 Dr Seth Ember has developed Incarnate, a machine that allows him to enter the minds of the demonically possessed. The demons hold the possessed in an illusion that embodies their perfect dream and by entering a state of near-death, Ember is able to venture into the dream, break its spell and bring them back. He has been left wheelchair-ridden since a car crash that killed his family and has since been searching to even scores against Maggie, the demon responsible. He is now approached by the Catholic Church who want him to deal with the case of Cameron Sparrow, a boy who has become possessed. Seth sets up his equipment and prepares to enter the dream that the demon has created for Cameron of his having the perfect father. In venturing in, Seth is determined to confront and finally kill Maggie but does not realise that the demon also seeks to lure him into a trap.

Incarnate is another release from the near-ubiquitous Blumhouse, the production company of Jason Blum who have cornered the contemporary market on medium-budget horror films. Blumhouse has been responsible for the Paranormal Activity sequels, as well as the likes of Insidious (2010), Sinister (2012), The Purge (2013) and Ouija (2014), which they have all been spun out into successful series. (See bottom of the page for Blumhouse’s other films). Blumhouse has at various times become the refuge of a number of genre directors – James Wan, M. Night Shyamalan, Scott Derrickson, Bryan Bertino, Mike Flanagan, Rob Zombie, Rob Cohen and Greg McLean – who have found freedom in getting projects launched on the stripped-down budgets that Blum offers.

In this case, the director to have signed on to make Incarnate was Brad Peyton. Peyton may not be the equivalent of a household name in the horror genre but has consistently worked in material that has been reviewed here – albeit most of it of the lightweight, family-friendly variety. Peyton made his feature-length directorial debut with Cats & Dogs: The Revenge of Kitty Galore (2010) and followed it with the inane Journey 2: The Mysterious Island (2012). The one big-budget film Peyton made before Incarnate was San Andreas (2015), which managed to reduce a massively devastating earthquake to a victimless feelgood family reconciliation drama. He subsequently went on to the videogame adaptation Rampage (2018).

Brad Peyton’s films have an irritatingly lightweight quality driven either by mass destruction spectacle-driven effects and/or children’s films inanity. None of this suggested that Peyton was harbouring an inner horror film director or showed an instinctive understanding of the way the genre works. More than that, Incarnate looked generic in every regard. The title was another evil-sounding adjective that every horror film since Blumhouse’s own Insidious and sequels has attempted to appropriate – the upshot of which has resulted in a series of near-identical sounding films.

Moreover, the exorcism and possession film has of late become a genre utterly wrung out of any creativity– see tedium-inducing efforts to have come out in recent years such as The Exorcism of Emily Rose (2005), Blackwater Valley Exorcism (2006), Anneliese: The Exorcist Tapes (2011), Back from Hell (2011), The Devil Inside (2012), Deliver Us From Evil (2014), Backmask/The Asylum/Exeter (2015), The Vatican Tapes (2015) and The Crucifixion (2017). The truth about the exorcism film is that when William Peter Blatty created it with The Exorcist (1973), he came from a Jesuit background and what informed the issue for him was a theological debate. All that other filmmakers took from The Exorcist was the parade of barf bag shock theatrics. Very quickly these – the vomitings, the obscenities, the levitations, the cracked and hideous faces – settled in and have been repeated without variation for the last four decades. Almost none of the films step back to address the wider issues that Blatty raised – one that gets me is why it is always assumed that the notoriously controversy-laden Catholic Church is the default front line of defence against demonic forces or even whether in an era of modern psychology the whole question of demonic possession might not be just a tad outdated.

When it comes to Incarnate, Brad Peyton serves up the same old tricks once again – people levitating up around the ceiling, spouting red glowing eyes, young David Mazouz talking in a deep voices, the demon wielding personal information in a series of taunts – and there is little that feels as though anybody is making any effort to vary or offer an imaginative alternative to what has gone on since The Exorcist.

The sole novelty that Incarnate offers is that it appropriates the basic set-up of Inception (2010) and a whole bunch of films before that such as Dreamscape (1984) and The Cell (2000) about a therapist being able to enter into the mental dream terrain of a patient. Incarnate spins the basics of Inception into the idea of the demon keeping the possessed in a perfect idealised dream world and of Aaron Eckhart being able to enter into the dream to rescue them. The novelty of this idea keeps Incarnate interesting for a reasonable way into the film, even as the barf bag theatrics prove tiresome.

The other thing that keeps the film going is Aaron Eckhart’s central performance as the wheelchair-ridden exorcist. I have never much cared for Eckhart as a performer but here he goes for broke with a fierce harshness as though determined to be the most badass exorcist to ever cross the screens. It is the sheer ferocity and grim determination that Eckhart puts into the role that gives the film much of its drive.

Even then though, the novelty of the Inception plot tapers off into a frustrating series of nested reality flips leaving us thinking that the day has been saved and everything is over before yanking the carpet out from under us. This whole all a dream/illusion/demon playing dead jump plays into another series of yawn-inducing cliches that in their sheer profusion kill off whatever minor interest Incarnate may have generated.