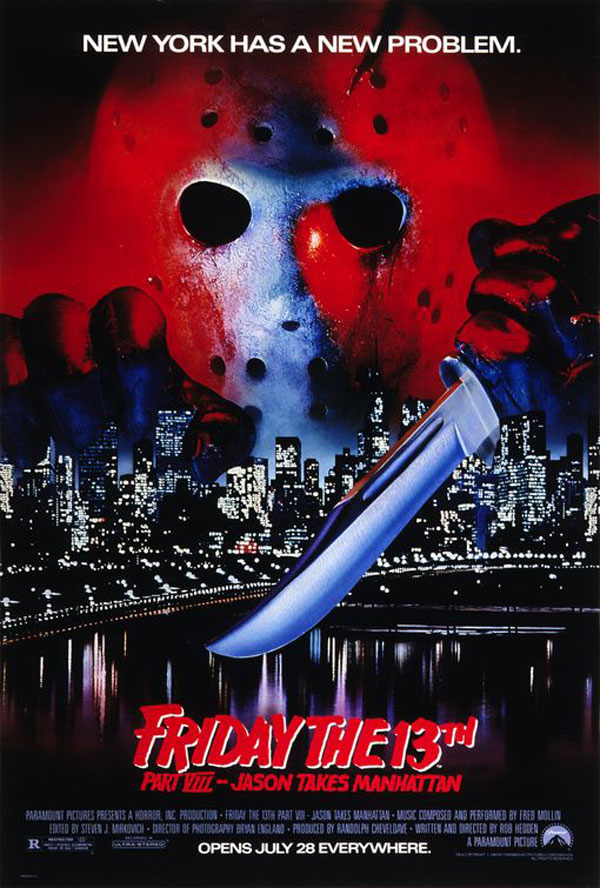 Two teenagers are making out on a sailboat when the drifting anchor tears up an electrical cable on the riverbed. The electricity succeeds in reviving Jason Voorhees who boards the yacht Lazarus and slaughters his way through a group of teens from Crystal Lake as they hold a graduation party. The ship eventually arrives in New York where Jason pursues the remaining survivors through the streets of Manhattan.

Friday the 13th Part VIII: Jason Takes Manhattan was the eighth film in this seemingly never-ending Friday the 13th series. Never has something been spun for so long out of so little. The entire series circles around a very limited and never-varying formula – a mindless and character-less brute stalking a line-up of faceless teens who are punished for everything from having sex to doing drugs to playing practical jokes. As always, the chaste and clean-living heroine is the one who survives. Jason is in effect the ultimate disapproving parent figure. There is no suspense or any style to the films – just scenes of people being set up and inevitably having various items impaled into their bodies.

The first film had a certain novelty value – its creative deaths were innovative when it came out, but by the point of Friday the 13th Part VIII: Jason Takes Manhattan such limited novelty had been worn to death by sequels and hundreds of imitators. This film’s idea of novelty is to vary the setting from a summer camp to a cruise ship and then the streets of New York City – which shows exactly what sort of poverty of imagination these films exist on.

By now, Jason’s invulnerability has become so absurd – having variously survived electrocutions, machetes impaled in the brain and being cremated – that the series’ continued revival of him is frankly unbelievable. Indeed, the constant revivals of Jason from the dead, despite impossible dispatches in the previous film, make him seem a supernatural creature despite the series playing it to the contrary.

For all that, Jason Takes Manhattan is one of the better entries in the Friday the 13th series. The Manhattan setting, despite the fact that it nearly takes three quarters of the film to get there, actually works for the film. The opening montage of New York street life with addicts openly shooting up and punks lazing about immediately adds a gritty realism. (In actuality, the Manhattan locations are represented by Vancouver, Canada).

Many of the New York scenes display an amusingly nonchalant attitude and a droll sense of humour – when punks challenge Jason with knives he merely lifts his hockey mask and reveals his face to them (although keeps his back to the audience), which is enough to make them back off in fright. Most amusing is the scene where the two pursued teens burst into a diner and shout “There’s a maniac after us,” to which the cynical response is “Welcome to New York.” The film’s refreshing attitude, it seems, is that in New York, Jason is just another maniac.

Director Rob Hedden subsequently went onto direct the angel tv movie Dying to Life (1991), The Colony (1995) about a sinister gated community and Alien Fury: Countdown to Invasion (2000). Hedden has also written the scripts for Clockstoppers (2002) and the reality tv/human hunting film The Condemned (2007).