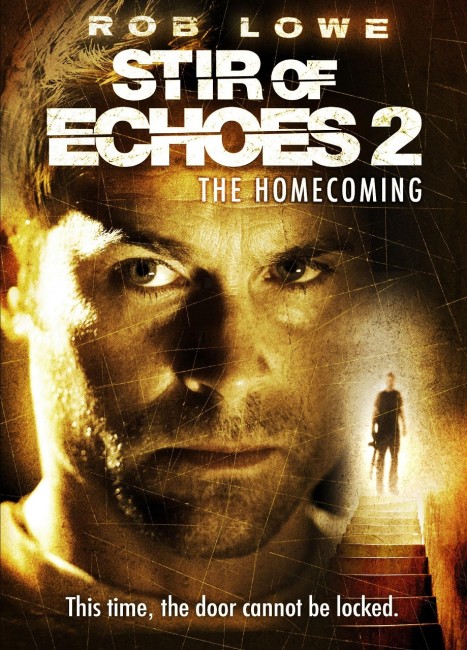 Ted Cogan is a captain with the US Forces serving in Iraq. He is witness as the men under his command shoot on a van that refuses to stop, only to set an Iraqi family inside on fire. Ted returns home to his wife and teenage son in Bridgeport a decorated veteran. Soon after he settles back in, Ted is haunted by hallucinations and nightmares of people being set on fire. Thinking that he is suffering from post-traumatic stress, Ted seeks help. As the hallucinations and visions increase, Ted realizes that he is being haunted by a dead person – an Arab-American man who was set alight by youths. The visions become increasingly more disturbed as the dead person drives Ted to avenge their murder.

David Koepp’s Stir of Echoes (1999), adapted from Richard Matheson’s 1958 novel, is an underrated and incredibly spooky film. It vanished after doing only modest business largely because it came out amid the big supernatural boom of 1999 – The Blair Witch Project (1999), The Haunting (1999), The Sixth Sense (1999) – and was released at a point when audiences seemed fatigued about yet more supernatural horror. That said, it was an excellent film with David Koepp generating an atmosphere of prescience and ghostly happenings with enormous skill.

When searching for viable properties they could revive, someone no doubt remembered Stir of Echoes was a work that nobody had yet bothered to sequelize. Thus this sequel was born, being released to cable in the US and dvd almost anywhere else. Though I enjoyed the original Stir of Echoes enormously, I cannot say that I was excited about a sequel. The premise didn’t seem to hold enough to make for an interesting series – I mean, we have had plenty of series about lead characters that can see the dead – look no further than the ongoing popularity of tv series such as Medium (2005-11) and Ghost Whisperer (2005-10) – and ask what it is that a Stir of Echoes series can offer that is any different.

The writing/directing duties for the sequel have been handed to Canadian director Ernie Barbarash who had previously produced American Psycho (2000) and its sequel, had produced and written Cube 2: Hypercube (2002) and then made his writing/directing debut with Cube Zero (2004). Barbarash has subsequently directed other genre works such as They Wait (2007), Hardwired (2009), Meteor (tv mini-series, 2009), Ticking Clock (2010) and Abduction (2019). Kevin Bacon was either not interested or free to return so the lead role is recast with another 80s Brat Packer in Rob Lowe who plays a different character experiencing similar visions of the dead.

First of all, let me give Ernie Barbarash full marks in trying to shake the premise of the original film up when it comes to the sequel – we go from Kevin Bacon who was plays an ordinary working joe who becomes able to perceive the supernatural after an experiment in hypnosis at a party to Rob Lowe as an Iraq War veteran who returns with post-traumatic stress as a result of atrocities conducted in combat and starts to see things. It is certainly a topical and intriguing premise to start from, although predictably places like the IMDB comments board are awash with redneck commentary about how it is an anti-American film etc etc. In truth though, that is placing too much importance on the shoulders of a routine film like Stir of Echoes: The Homecoming. Where Ernie Barbarash could have made something politically incisive, he turns out at best a routine horror film.

What becomes irritable about Stir of Echoes: The Homecoming is how Ernie Barbarash turns it into a tedious parade of pop-up scares with Rob Lowe seeing burned bodies, dead soldiers and gored Iraqis everywhere he goes. The film becomes a continuous profusion of rubber reality scenes where Rob Lowe keeps thinking he sees something scary and it turns out not to be there at all. By contrast, the original had none of these – David Koepp created a series of eerie scares, not kept jumping into our faces and going boo every two minutes. Unfortunately, these types of films operate on a series of diminishing returns where the constant profusion of effects trying to spook us becomes monotonous and erodes any sense of narrative centeredness to the point where the pop-up scares eventually fail to mean anything. You can see how the unique twist of the haunted Iraq War vet would have worked on the page, but unfortunately Ernie Barbarash’s directorial approach kills it off.

The point the tedious lead-up finally starts to work is the unusually grim and downbeat ending that Ernie Barbarash arrives at – one that sees [PLOT SPOILERS] Rob Lowe locked up in a mental asylum, his wife dead and his son locked away for murder. There is an effective revelation of the identity of the killers and Rob Lowe’s connection to these. Although, underneath this seems to lie the unforgiving issue of justice untempered by mercy that underlies much US thinking on crime and punishment – the belief that the guilty must pay and that no sympathy be afforded for their circumstances.