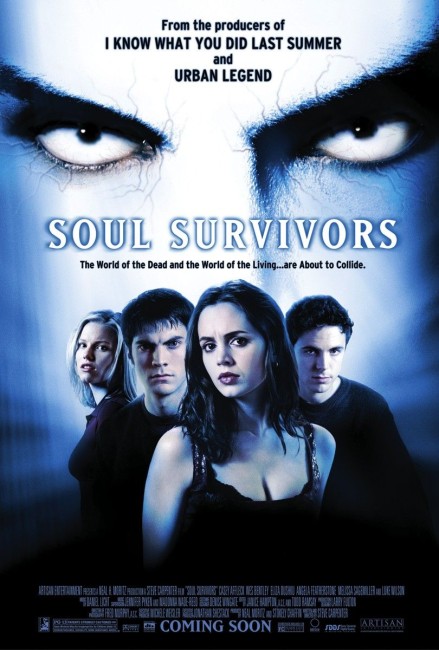 Cassie moves out of home to start university in Chicago. Her former boyfriend Matt asks for a goodbye kiss as ahe and her friends leave a party. However, this is seen by Cassie’s new boyfriend Sean and jealousy ensues. Stressed by the tension while driving, Cassie crashes into a car on the road. She recovers but Sean is killed. Trying to settle into university life afterwards, she is certain that Sean’s ghost is haunting her, while she is followed and terrorised by sinister figures.

I hate watching films that have been cut for American tv – where little black squares pop up to obscure nipples, where words like ‘fart’ and ‘goddamn’ are routinely bleeped out. American tv has the most conservative censorship standards of anywhere in the Western world – it seems it is more offensive to show a bare breast than someone’s head being blown off. Some films end up so mangled – the most notorious example probably being the tv cut of Scarface (1983) – that one wonders what the purpose of screening it at all was. What is even more offensive to one’s sensibilities is now having to see films that have been cut for tv in theatres. However, that is exactly what one is seeing with Soul Survivors.

Blame it all on Senator Joe Lieberman and the panic he sent throughout the entertainment industry during the 2000 election campaign by drumming up hysteria about theatre chains permitting underage children into R-rated films and threatening legislation to prevent the advertising of R-rated film trailers during general admission films. The upshot of this was one of the most viciously effective censorship campaigns ever mounted. Not that Lieberman would ever admit that such was his intention but the end result has been that without the ability to promote R-rated films, the production of mainstream R-rated films was virtually killed off.

While one should not make the mistake of thinking that sex and violence are good things in themselves, the corollary thinking – that we are all children who have to be perpetually protected from dangerous ideas and the potentially arousing sight of a nude body – is ludicrous. This blind thinking has had such great works as Kissed (1996), Lars von Trier’s The Idiots (1998) and Stanley Kubrick’s Eyes Wide Shut (1999) brutally chopped in North American release, while other films like Kids (1995), Happiness (1998), Quills (2000), L.I.E. (2001), Ken Park (2002) and House of 1000 Corpses (2003) have had enormous difficulty getting distribution because of controversial subject matter. A few years ago, Basic Instinct (1992) heralded an eruption of on-screen sex and sensuality; after 2000 such films became almost impossible to find.

You can only have disdain for Soul Survivors in bowing to this pressure. Soul Survivors was originally to have been an R-rated film but its release was held up for several months while it was recut as a PG-13 film, which must surely be a kiss of death to having it taken seriously be horror fans. You can only have contempt for a studio that has so little regard for artistic product that they can only think of the way it should be packaged for easy sell. On the other hand, one wishes there had been a maligned masterpiece here that one could get indignant about its butchering. In truth, Soul Survivors is exceedingly ordinary. It belongs to the modern, post-Scream (1996) teen horror genre, films that have become incredibly chaste in comparison to their 1980s slasher counterparts, such that a PG-rating surely amounts to a big doodly-squat.

After Scream deconstructed the slasher movies of the 1980s, teen horror films turned to other themes – The Faculty (1998) rehashing alien body snatcher films, Final Destination (2000) rehashing The Survivor (1981). Soul Survivors is no more than a rehash of The Sixth Sense (1999). [Although, the film that it comes closest to is actually Jacob’s Ladder (1990)]. Soul Survivors copies The Sixth Sense in setting up a series of hauntings and then conducting a surprise end reversal to reveal that the central character was dead all along. With this also having been done (albeit in a slightly different way) in The Others (2001), which came out only a month before Soul Survivors, such a twist ending promptly became a cliché.

Soul Suvivors conducts it with no cleverness or finesse – one can see the twist coming miles in advance. All the mysterious priests who are then revealed to be dead, cuts back to the car crash and Melissa Sagemiller on the operating table, flashes of the sinister pursuing figures also appearing in the crashed car, are obvious clues that gave the game away well in advance. In both The Sixth Sense and The Others, the climactic twist was a shattering surprise; here it merely comes as the cap on a series of hauntings and random reality disjunctions that could have been grafted on from your average A Nightmare on Elm Street copy. Worse though, while in these other films it was an emotionally wrenching twist, here the film wraps it up on a happy positive feelgood ending. The other films left audiences going out buzzing, Soul Survivors merely leaves us on a mawkish note.

Soul Survivors was written/directed by Steve Carpenter (usually billed as Stephen Carpenter). Along with co-writing partner Jeffrey Obrow, Carpenter also co-directed the B-budget likes of Pranks/The Dorm That Dripped Blood (1982), The Power (1984) and The Kindred (1986), and co-wrote Servants of Twilight (1991) for Obrow. Soul Survivors was Steve Carpenter’s first solo directorial outing (and the only one he has made to date), although he subsequently went onto create the fairytale tv series Grimm (2011-7). Carpenter generates some okay suspense, although nothing standout. The one good aspect of the film is the lushly verdant photography.