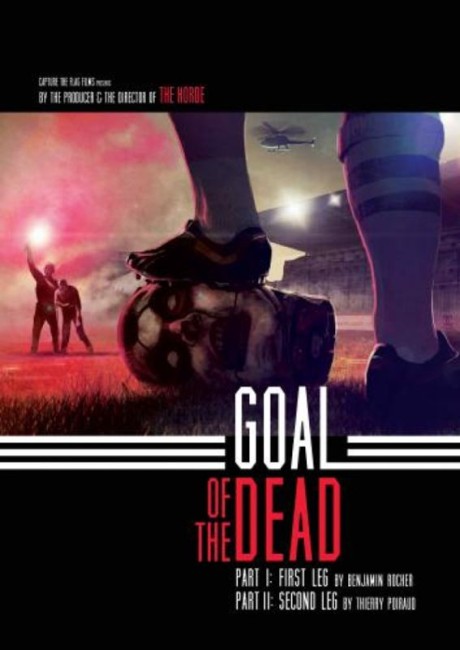 Sam Lorit is the captain of the Parisian soccer team Olympique, although everyone thinks that his glory days are over and he should retire. Seventeen years ago, Sam was plucked from obscurity in the small provincial town of Caplongue and brought to stardom. He  now makes a return to Caplongue with the Olympique team for the first time since then to play a match against the local team. However, when they arrive, Sam is greeted with disdain by the locals and seen as having betrayed his hometown. Meanwhile, Dr Belvaux injects his son Jeannot, the captain of the Caplongue team and Sam’s former best friend, with a serum to make him stronger. However, this goes wrong and Jeannot emerges onto the pitch as a zombie, attacking everything in his way. He vomits liquid onto everyone he comes in contact with, turning them into zombies too. Sam and various others flee, while trying to find a means to fight back against the zombie horde.

Goal of the Dead is co-directed by Benjamin Rocher who made splash five years earlier as co-director of the ferocious zombie siege film The Horde (2009) and subsequently went onto the crime film Antigang (2015). His co-director here is Thierry Poiraud who previously made the videogame The Morlov Affair (1996), co-directed the gonzo The Atomik Circus – The Return of James Bataille (2002) and subsequently went on to solo direct Alone (Don’t Grow Up) (2015) about children trying to survive as the adults around them are turned into zombies.

Goal of the Dead spends a lot of time in the build-up. Not too many zombie films run too much beyond the standard 90 minutes, whereas this runs to two hours and twenty minutes. Quite a reasonable amount of the film is spent in introducing us to the characters. It helps if you follow soccer, although it is probably not necessary to enjoying the film – we get much in the way of talk about transfers, coaching and game plans, spoofs of the media reportage and career arcs of star players.

The film sketches out some likeable characters arcs – Alban Lenoir as the aging team captain, who everyone treats as though his career is over, returning to his hometown only to find everyone hates him (and in the second part reconciling with his father and the daughter he never knew in some well written arcs – in fact, very strong character arcs for a zombie film); Ahmed Sylla as the young rising Ivorian star; the quartet of town slackers wanting to sneak into the game and create a riot. These are delivered with an undeniable sense of humour as the film goes on. What you are reminded of in tone is something akin to Shaun of the Dead (2004), albeit spoofing the French national sport.

One of the weird novelties of the film is that it comes in two parts, each of which is directed by one of the co-directors. Each part also comes with its own title and a different set of credits. The first part consists of the build-up, the second the full zombie outbreak. The second half kicks into full throttle as Thierry Poiraud gets into the gore and splatter with great enthusiasm – some nifty shots with bullets passing all the way through heads or shotguns fired and heads exploding in slow-motion. The one oddity is that we don’t seem to get much flesh-eating on the part of the zombies, rather the infection is transferred by them vomiting white liquid onto the victims.

The humour is far sharper and on the ball in this latter section. The film has the witty idea that zombies are not too different from soccer hooligans, while there are some other amusing sections where the infected coach starts mindlessly repeating stock inspirational phrases. Naturally, the climax of the film involves Alban Lenoir getting onto the zombie-filled pitch and scoring a winning goal by kicking a severed head into the net.