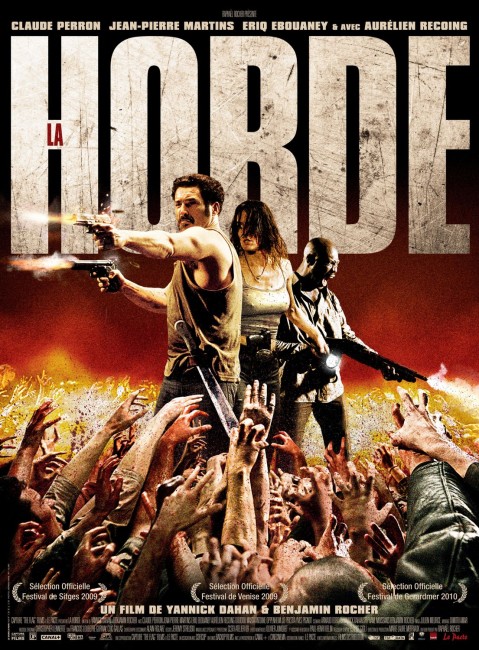 In Paris, Oussem heads a police unit in a raid on a criminal base in a condemned apartment building. The operation goes wrong and ends in a shootout with one of the officers wounded. While the gang holds them at gunpoint, they are attacked by a frenzied man who devours the flesh of the living. They become aware that the city outside the building has been overrun by a zombie horde. Oussem proposes a deal to the gang leader Adewale – that the two groups put their differences aside for the sake of mutual survival and making an escape to freedom. Agreeing, the group makes their way down the various levels, which places them into the midst of a ferocious pitched battle against the zombies.

The Horde was a French variation on the numerous zombie films that came out following the successes of 28 Days Later (2002), Dawn of the Dead (2004) and Shaun of the Dead (2004). Yannick Dahan and Benjamin Rocher had previously paired up on the hard-edged gangster shootout film Rivoallan (2008), which this acts as a sequel of sorts to (ie. is referenced as past events). Without Yannick Dahan, Benjamin Rocher went on on his own to make the highly amusing Goal of the Dead (2014), which combined zombies and soccer, and the non-genre action film Antigang (2015).

The Horde is reasonably effective at what it sets out to do. Dahan and Rocher never do anything to try and reinvent the zombie film – there is one scene where Yves Pignot and the criminals have a female zombie squirming on the floor and hold a severed head up and make her kiss it, which does go some of the way towards the metaphor of who is more monstrous – the zombies or the humans mindlessly slaughtering them – that play out in some of the George Romero zombie films.

What they do conduct however is a fierce variation on the zombie film familiar and create an unusual set-up – somewhat borrowed from Assault on Precinct 13 (1976) – of a group of cops and hardened criminals forced to work together against a common menace. (It has been argued by some genre purveyors that John Carpenter’s depiction of the gangs outside the walls of the station house in Precinct 13 was to treat them as Romero zombies and this just takes it the logical step further). Indeed, if The Horde had not been that one that came out first, you would be tempted to call it The Raid: Redemption (2011) reconceived as a zombie film.

What Dahan and Rocher do give The Horde is a ferocity that few other zombie films have. The two clearly love the hard-boiled crime milieu and action film. The fight scenes have a fierce determination and intensity to them that carries an enormous kinetic kick. There is one particularly great scene where Jean-Pierre Martins is surrounded on every side in a parking lot by a vast horde of zombies and starts feebly shooting into the seething mass with his handguns and then leaps on top of a car and hacks at them with a machete even as their numbers seem to overwhelm his every effort.

There is an edgy tension in the way the two sides are forced to collaborate, even if you feel that Dahan and Rocher never do anything astoundingly original with this. Certainly, the latter scenes are boosted a good deal by an entertainingly gregarious performance from Yves Pignot as an old-timer war veteran who starts wading into the conflict with gusto even while not seeming all there in his insistence that the zombies are Chinese.