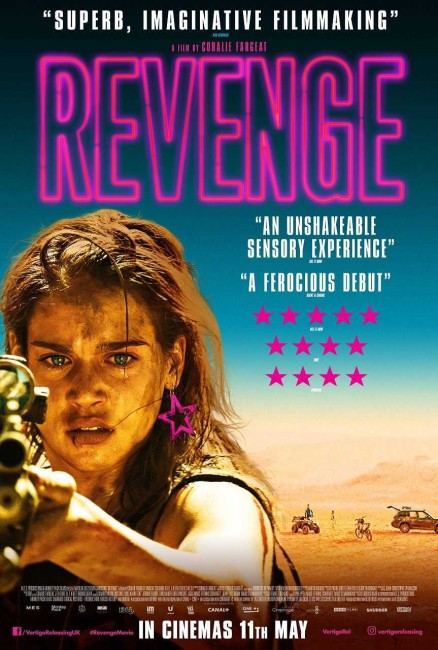 Jennifer accompanies Richard, a married French businessman, on a getaway to his retreat home in the desert. In the morning, two of his friends Stan and Dimitri arrive to go hunting. While Richard is away, Stan comes onto and then rapes Jennifer. Dimitri walks in on them but does nothing to help her. Richard returns to find a traumatised Jennifer. When she threatens to call his wife, he slaps her. She flees and they pursue her. As she arrives at a cliff edge, Richard tries to calm her down only to then turn and push her over the edge. Despite landing impaled on a tree branch through her stomach, Jennifer drags herself free and patches up her wound. She then proceeds to hunt and kill the three men.

The appeal of the rape-revenge film is one that continues to baffle me. This was started off by the notorious I Spit on Your Grave (1978), which is a brutal and harrowing film to watch. At the time, I regarded it not as an exploitation film but one that pushes us in highly uncomfortable way to be witness to a savage experience. Less the same can be said by about the time of the remake and three sequels. The very fact that people keep trying to make money out of showing women undergoing degradations and brutality is by its very nature exploitative. And I really don’t know what it says about the fact there is a sizeable enough audience out there that these earn sufficient money that they keep making more of them.

All of which makes Revenge more interesting. It is the first rape-revenge film directed by a woman – in this case French newcomer Coralie Fargeat. Surely a woman in the director’s seat of a rape-revenge film would by its very nature redress the accusations of exploitation? Although she was not the first to do – the earlier Evangeline (2013) had been directed by Karen Lam.

Certainly, as Revenge starts in, one is impressed by Coralie Fargeat’s eye as a director. Fargeat took a film crew to Morocco to shoot. The film is mostly shot in the English language, alternating with some French but even then dialogue has been stripped to a minimum. Much of the action takes place at a luxurious house in the desert. The minimalist dialogue exchanges are punctuated by an eye for scenography – casual details like the half-eaten apple rotting in the background, the automated pool cleaner scouring the bottom oblivious to human presence, the interesting effects created by coloured panels on the plate glass window. Welcomely, the rape itself is barely dwelt on – merely a good deal of uncomfortable tension between Matilda Lutz and Vincent Colombe and then seeing her hand slam against the bedroom window in the foreground.

Clearly, this is Coralie Fargeat wishing to place the emphasis on the ‘revenge’ part of the title. However, this is about the point that the film collapses from the promising into a steaming heap of absurdity. Fargeat has clearly intended Jennifer to become something akin to a comic-bookish avenger. And if she were conducting a remake of The Chosen One: Legend of the Raven (1998) or making say a female version of Jonah Hex (2010) and something that was an outright comic-book film, I would probably have liked Revenge a whole lot more.

The absurdities begin the moment that Matilda Lutz is shoved over a cliff by boyfriend Kevin Janssens – and then survives (we’re talking a fall of some fifty or so feet). Moreover, she survives with the branch of a tree impaled through her back and protruding some six or more inches out of her stomach. Even assuming no fatal injuries and no actual organs were pierced or a lack of internal bleeding that would have almost certainly resulted, this is about the point that the average person would die very shortly after the fall due to the fact that they would have bled out from such a large wound. Instead, while still impaled on the tree branch, Matilda manages to hook a cigarette lighter and set the branch on fire. This serves to burn through the tree sufficiently to cause it to collapse and allow her to get free – miraculously enough, the burning of the tree where she lies impaled directly above the fire fails to leave her with second degree burns.

You are laughing at Revenge by about the point that Matilda Lutz heads off seeking revenge. Somehow not having suffered blood loss due to having a large open wound (which has still not been bandaged) or any further damage to internal organs by her contortions to get the lighter, she walks off with the branch still protruding from her stomach. She is still well enough at this point to hide in the lake and then emerge and attack and defeat a man (Guillaume Bouchede) who is considerably larger than she is.

Rather than passing out from blood loss or more likely dying as any normal person would by this point, Matilda then makes it to a cave. There, in perfect good sense, she consumes a can of beer and a tab of the peyote that was earlier said to be so potent it could cause someone to have hallucinations that would make them cut their leg off. She then decides this is the perfect time to conduct self-surgery to remove the branch and does so with a knife, further cutting open her stomach wound to remove it. Onto about the fourth or fifth miracle by now, somehow she does not bleed out, pass out or even apparently experience any pain during all of this.

And then comes the bit that had me in hysterics – she manages to cauterise the wound, one that is several inches in diameter (ie. as large as my balled fist), by using the heated-up metal from the aluminium beer can. Even more laughably she wakes in the morning with no trace of any wound on her stomach but now a tattoo from the logo of the beer can across her stomach.

Disappointingly, here ends the miraculous medical absurdities the heroine has to undergo. However, there are still plenty of other absurdities happening elsewhere. Like when the corpse of Guillaume Bouchede, which was killed at night-time, is fished out of the lake the next morning and looks bloated and rotted as though it had been in the water for weeks. Or a scene where Vincent Colombe gets glass in his foot, manages to dig both a thumb and forefinger inside his foot to find the shard leaving blood gushing everywhere and then moments later gets up and continues his pursuit, running on the unbandaged foot. Or the climax where a nude Kevin Janssens receives a full shotgun blast to the stomach, gets up and places Saranwrap around the wound and continues on into action without any other deleterious effects.