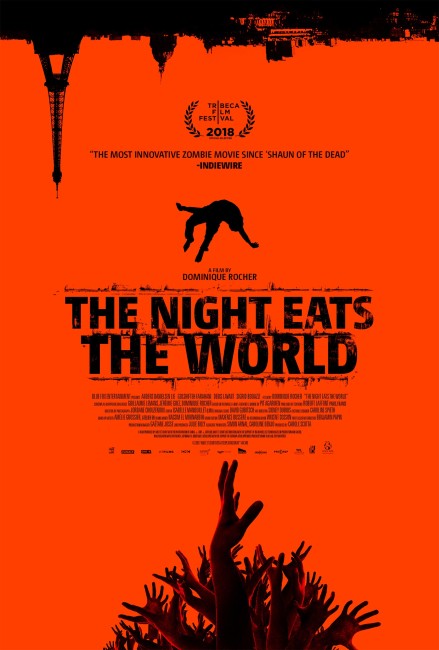 In Paris, Sam goes to the apartment of his ex-girlfriend Sarah to get back some tapes. She is holding a party and tells him to wait in the office where he falls asleep. He wakes in the morning to find that the zombie apocalypse has occurred and all the partygoers are either slaughtered or turned into zombies. He manages to barricade himself into the apartment. From there he proceeds to reconstruct the building into his own fortress, either eliminating or locking the zombies up in other apartments. He is able to live on the plentiful supplies he finds in the building. Things are thrown awry with the arrival of Sarah, a girl who comes from across the rooftops.

The zombie film has been huge in the latter half of 2000s/through the 2010s. That needs no saying. It has spread to almost every country of the world. The Night Eats the World is one offering from France, which has had an uneven output of zombie films. Cult director Jean Rollin made several entries with Pesticide (1978), Zombies’ Lake (1981) and the remarkable The Living Dead Girl (1982), while this era also saw The Porno Zombies (1978) and The Revenge of the Living Dead Girls (1987). The modern zombie revival has produced the successful The Horde (2009) and Goal of the Dead (2014), plus the very unique They Came Back (2004).

The Night Eats the World is an adaptation of the 2012 novel of the same title by Pit Agarmen, an anagrammatic pseudonym for Martin Page, a popular French writer of regular novels and children’s works. The film version was a directorial debut for Dominique Rocher.

The Night Eats the World doesn’t reinvent the zombie film but is a likeable work. In conception it is more like a low-key version of Dawn of the Dead (1978). Where Dawn of the Dead had a group of survivors finding shelter in a shopping mall and creating their own personal paradise against the zombie onslaught outside, this has Danish actor Anders Danielsen Lie laying claim to a Parisian apartment building and making it his own paradise against the zombies outside. Of course, the way the story here is structured with one man surviving alone, alternately following his joy at freedom and despair at loneliness, and then the introduction of a woman later in the show, it resembles more a number of Last Man on Earth dramas, in particular The Quiet Earth (1985).

The Night Eats the World is more understated in comparison to Dawn of the Dead and The Horde. It is not a gore-drenched battle for survival, while the photography is naturalistic and often handheld. Rocher has the most fun with a series of montage scenes that show how Anders Danielsen Lie spends his day – creating orchestras of sounds out of various household objects; taking photos of the zombies outside, pinning these to the wall and amusing himself by shooting at them with a paintball gun and marking off the targets he has hit; building artful cairns for the bodies of an elderly couple inside their apartment. The film gets good mileage out of the friendship between Lie and the zombie of a former doctor who is trapped in the elevator cage – and played by no less than Denis Lavant of Holy Motors (2012) fame.

The film never quite plumbs the depths of loneliness that other Last People on Earth films invariably do. There is the introduction of the female companion played by expat Iranian actress Golshifteh Farahani in the latter third (although this gets a saddening twist revelation in the end). The film does climax on Anders Danielsen Lie’s escape from the burning apartment as it is overrun by zombies – and the remarkable image of him trapped inside the elevator cage, escaping up through the roof and then climbing the interior of the shaft surrounded by a wall of groping zombie hands.