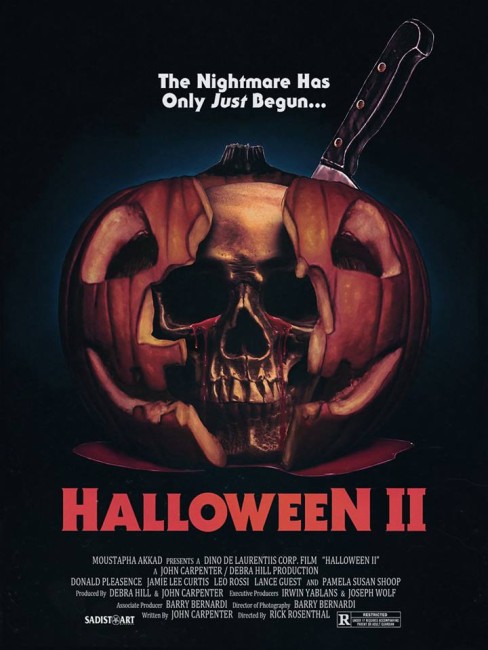 After Michael Myers is shot, Dr Loomis and the police search for his body. A person resembling Michael is hit by a car, which then explodes, burning the body beyond easy identification. Loomis is certain that it is not Michael. Refusing to wait for pathologists to identify the body, Loomis begins his own obsessive search. Meanwhile, Laurie Strode has been taken to hospital following her ordeal. However, Michael has survived and makes his way to the hospital, slaughtering most of the staff to get to her.

John Carpenter’s Halloween (1978) was a remarkable success story, a film made for less than half-a-million dollars that became the most successful low-budget film ever made for several years. Halloween made the names of director John Carpenter and star Jamie Lee Curtis, not to mention inspired an entire cycle of slasher films. After such remarkable success, this sequel seemed inevitable. By now, John Carpenter had gone onto bigger things and had sold interest in the series off to movie mogul Dino De Laurentiis. For the sequel, Carpenter stood back to take a secondary role, producing and co-writing while turning the directorial reigns over to newcomer Rick Rosenthal.

Halloween II ended up being a big disappointment. Halloween had inspired a host of imitators, most notably Friday the 13th (1980) and sequels. Most of these were styleless stalking films whose sole interest was the provision of a series of novelty deaths. These lacked any of the eerie atmosphere that John Carpenter generated in Halloween.

Disappointingly, Halloween II ends up looking more like a Friday the 13th sequel (albeit a better budgeted one) than it does a Halloween sequel. While the first film had no more than four victims, Halloween II does not stop at twice that. Characters are introduced solely for the purpose of butchering them a few minutes later. Crucially, what this film serves up is random butcherings, but what it lacks is the eerie sense of peripheral suspense and downright creepiness that John Carpenter evoked in Halloween.

Jamie Lee Curtis has nothing to do this time other than scream and run in terror. Indeed, it was after making Halloween II that Jamie Lee announced that she was quitting the horror genre, not wanting to be typecast as a slasher heroine. She only made Halloween II out of obligation to Carpenter for giving her a career boost – although she did return to the fold seventeen years later for Halloween H20: Twenty Years Later (1998) and with the subsequent Halloween: Resurrection (2002) and Halloween (2018).

Michael Myers now becomes something almost supernatural, surviving several attacks that would kill a normal person, including being burned alive. Various references are made to occult rituals – something that was taken up in a major way in the fifth sequel Halloween: The Curse of Michael Meyers (1995). There is also a major identity revelation, more than likely modelled on the familial connections revealed in the previous year’s The Empire Strikes Back (1980) but this is a decidedly melodramatic plot twist that falls flat.

On the other hand, the three sequels that would follow suddenly make Halloween II seem a whole lot better in comparison upon re-reviewing. Rick Rosenthal’s direction is occasionally stylish, particularly at the well-staged climax. There are some occasionally effective shots – like where Leo Rossi’s Bud is strangled against a semi-opaque window in the background while Pamela Susan Shoop waits in the foreground and then Michael comes and caresses her, she thinking it is Bud, before he strangles her; or a shot that moves past a nurse to a foreground monitor that shows Michael disappearing into a room, then moves back to the nurse as she leaves the station, then back to the monitor, which shows her entering the same room that Michael entered. Certainly, the carry-over of mood from Halloween in the opening scenes is flawless, such that the two films can be seen together without a break. John Carpenter also delivers the score, which develops out the same haunting melodic themes he did in the original.

Rick Rosenthal has failed to go onto any notable career. He directed Bad Boys (1983), American Dreamer (1985) and Russkies (1987), none of which set the world on fire, before disappearing into the tv wasteland. He later returned to the Michael Meyers/Myers saga to direct Halloween: Resurrection (2002). His only other venture into genre territory was an even more ill-advised sequel to a classic – the tv movie The Birds II: Land’s End (1993) – for which he substituted the generic Hollywood pseudonym, Allan Smithee.