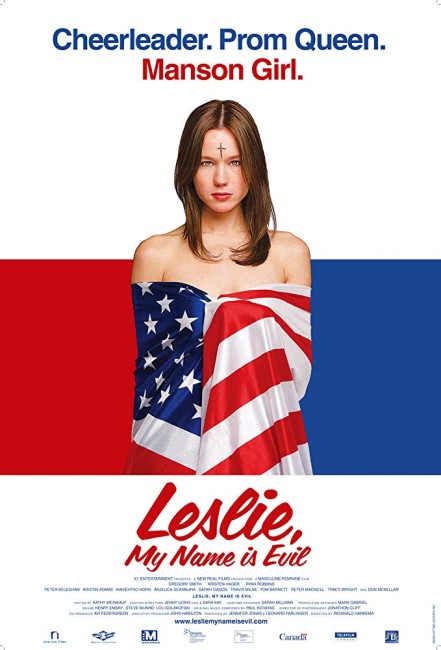 aka Manson, My Name is Evil

In 1970, Perry is selected as a juror for the trial of the cult known as The Family led by Charlie in which Charlie and three of his girls are accused of a series of graphic murders. As the trial begins, Perry finds himself drawn to one of the girls, Leslie. Leslie grew up in a middle-class household fractured by divorce. After becoming pregnant and forced to have an abortion by her mother, Leslie was swayed by Charlie’s magnetic charisma and drawn to join his cult. Charlie preached a mixture of free love, armed revolution and the use of LSD. Leslie joined in the murders as part of a desire to be accepted by Charlie. At the same time as this was happening, Perry grew up in a middle-class household and became engaged to a good church-going Christian girl Dorothy that he met at university. It was expected that he go into service in the Vietnam War upon graduation but was promised a job with a chemical factory that allowed him to evade the draft. As the trial gets underway, everyone from Perry’s fiancee and conservative father to President Nixon believes Charlie and the girls to be guilty. Perry, feeling sexually frustrated because Dorothy will not go all the way, finds himself drawn to Leslie. He begins to think that she may be innocent, even though this flies in the face of the social expectation heaped on him.

Leslie, My Name is Evil is a film based on Leslie Van Houten, one of the so-called Manson Girls. Van Houten grew up Altadena, California. Along with her boyfriend Bobby Beausoleil, the eighteen-year-old Leslie fell into the company of Charles Manson in late 1968 and became part of his cult known as The Family, living together in a commune located on the Spahn Ranch near Topanga Canyon in Los Angeles. Manson preached a mixture of free sex, LSD, revolt against the establishment and the belief in the coming race war that he termed Helter Skelter (named after The Beatles song, which he believed contained coded messages).

Over the successive nights of August 9-10, 1969, Manson directed his followers to conduct a series of murders. On the first night, Tex Watson and three of the girls entered a home where they stabbed and shot four people, including the pregnant Sharon Tate, wife of film director Roman Polanski. On the following night, six others, including Van Houten, entered the home of grocery store owner Leno LaBianca and stabbed to death he and his wife Rosemary.

Manson, Van Houten and two other girls, Susan Atkins and Patricia Krenwinkel, were placed on trial. The case dominated headlines, as much through the savagery of the crime as the bizarre sideshow that Manson turned the trial into by attempting to act as his own lawyer, while followers chanted outside and the girls disrupted proceedings and mutilated themselves with x marks on the forehead. All four were sentenced to death, although this was commuted to life sentence in 1972 after California revoked the death penalty.

There have been a number of films and tv shows about the Manson Family over the years with a recent upsurge in the 2000s that included the film The Manson Family (2003) and the tv mini-series remake of Helter Skelter (2004) with Jeremy Davies as Manson, not to mention Live Freaky! Die Freaky! (2006), a satirical Claymation animated retelling of the Manson story. Indeed, the same year that Leslie, My Name is Evil came out – the fortieth anniversary of the killings – also saw the tv movie Manson (2009) made for the History Channel, as well as Matthew Bright’s planned The Manson Girls, which ended up in limbo apparently because no completion guarantor would insure intended star Lindsay Lohan. Subsequent to this, there was Charlie Says (2018) with Matt Smith as Manson and the bizarre The Haunting of Sharon Tate (2019).

The best of these still remains the first, the tv mini-series Helter Skelter (1976) based on prosecutor Vincent Bugliosi’s book about the trial and starring Steve Railsback as Manson. Leslie, My Name is Evil is a Canadian-made production. It comes from editor Reginald Harkema who had previously made four obscure films, the best known of which is Monkey Warfare (2006), which has very similar themes about a young woman being drawn into the company of former 1960s radicals in a desire to cause anarchy and mayhem.

Leslie, My Name is Evil never gives its central characters anything more than first names – and even then changes the names of the other girls – but all the familiar aspects are there. It is surprisingly accurate to Leslie Van Houten’s biography – it gets right her motivation for falling into the cult as a desire to find fulfilment after her parents’ divorce and an enforced abortion, her relationship with Bobby Beausoleil, even down to a restaging of the LaBianca murder scene in exacting detail. The trial scenes differ somewhat due to Harkema adding and rewriting elements to create the character of Perry and his attraction to Leslie.

On the other hand, as a film about The Manson Family, Leslie, My Name is Evil is an oddity. The story of the Manson cult and killings is rich in potential. The early parts of Leslie touch on some of this – showing Manson’s charismatic ability to sway his followers and acid-induced parties in the desert. These and the killings are without doubt the most captivating aspects of the Manson story. However, Leslie, My Name is Evil never seems terribly interested in depicting these and places most of its focus on the trial scenes. These have their moments but were far better and more accurately shown in the original Helter Skelter.

The problem here is also that Leslie, My Name is Evil gives the impression that it has been made on a low-budget – the courtroom scenes take place in a cramped setting only about the third the size of the courtroom that the original case took place in. Reginald Harkema also gives the impression that he wanted to open up and give the film a visually surreal style – maybe create something like Natural Born Killers (1994) – but lacked have the resources. He jumps off into surreal newspaper headlines, out-of-focus dream sequences, colour-tinted acid trips – but these seem half-hearted, especially in contrast to the plain, four-square visual schema that he adopts elsewhere.

The other problem with Leslie, My Name is Evil is that Reginald Harkema conducts the least-interesting way of telling the story of the Manson Family. For reasons that do not immediately become apparent, Leslie’s story is intercut with that of Perry (Gregory Smith), the straight-laced Christian chemistry student who becomes one of the trial jurors. As Leslie’s story unfolds, you keep wondering why the film is spending half of its running time detailing Perry’s family background, his engagement to a Christian girl (Kristin Adams) and frustration over her desire not to have sex before marriage. It is hard to understand why a character who is completely unrelated to the Manson story is being given half the screen time. (Perry may have been very loosely based on William T. McBride III, the youngest of the Manson jurors, who lost his fiancee during the course of the trial. However, his religious background is essentially made up, while the film also fictionalises that he was the only one among the jury who doubted the guilty verdict). Some of this intended as contrast – Perry’s straight-laced lifestyle and cautious doubts placed up against Leslie’s abandoning of that background and surrendering to the complete opposite, which become mirror parallels as they unfold – but it is still confusing.

Eventually you realise what Reginald Harkema is doing here. While you are focused on Kristen Hager’s Leslie, he has carefully positioned Perry as a fulcrum character. The latter half of the film suddenly becomes about his being attracted to her and the question (which the film raises but never particularly answers) of whether he should decide she is innocent on the grounds that he is attracted to her.

The larger question that Reginald Harkema is interested in here is one of social morality. The question (which also becomes a very contemporary one) is a damning one about the 1960s – why there should be social outrage against the Manson killings when the same society is perfectly prepared to condone sending hundreds of youths into combat to slaughter Vietnamese without even thinking about it. The point is well made, even if Reginald Harkema is far too blatant with his symbols – the entire back wall of the courtroom being an American flag, the showing of numerous stills from the Vietnam War and discussions about the My Lai massacre and the like. The climactic scenes have Perry, after defending Leslie’s innocence, suddenly joining in the guilty verdict and winning the approval of his family and fiancee, while going on to his job, which is implied is producing napalm for use in the carpet-bombing of villages in Vietnam. It is an extraordinarily savage ending.

It is also an ending where the film leaves you balking at the positions that it takes – in saying what right does the US have to condemn the Manson Family for their handful of killings when the country has its hands covered in the blood of innocents it has demonised as no longer being civilised or human. Although, to regard members of the Manson Family as innocent because US society is guilty of hypocrisy is surely one of the most radical positions one has seen a film take in some time.