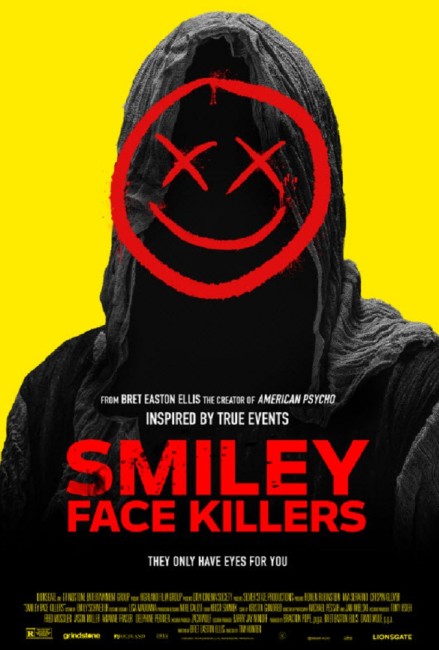 Jake Graham is a university student in Burbank. Mysterious hooded figures begin stalking Jake and his roommate Devon Holmes. Jake begins to receive a series of taunting text messages repeating over and over that the sea is waiting for him. He thinks that his girlfriend Keren’s ex Rob is messing with him, while she thinks that Jake is imagining it all after having gone off his meds. The hooded figures are part of a mysterious cult that has been nicknamed the Smiley Face Killers who abduct and kill athletic male students, dumping their bodies in the ocean, while leaving smiley face graffiti nearby. The cultists now close in to kill both Jake and Devon.

Bret Easton Ellis is an author who enjoyed reasonable acclaim beginning in the 1980s with the novel Less Than Zero (1985) written while he was in high-school and based on his experiences. Ellis’s most famous work was his third novel American Psycho (1991), a highly controversial work that was banned in many countries when it came out. Ellis has written a number of other books. His works have been adapted to the screen several times, most notably as Less Than Zero (1987), American Psycho (2000), The Rules of Attraction (2002) and The Informers (2008), while he has also written the original screenplays for The Canyons (2013) and The Curse of Downers Grove (2015).

Director Tim Hunter first appeared with River’s Edge (1986), a chilling work of social horror about a teen who kills his girlfriend and his friends who seem unconcerned about it. Hunter subsequently made the serial killer thriller Paint It Black (1989); the tv movie The Colony (1995) about sinister happenings in a gated community; and Control (2004) about the attempts to chemically harness the murderous tendencies of an executed man. Outside of that, most of Tim Hunter’s work has been in episodic tv.

In 2008, retired New York police detectives Frank Gannon and Anthony Duarte publicly announced their theory of what they called the Smiley Face Killer. They claim that since 1997 there has been a series of killings that cross eleven US states and comprise over three dozen victims. In all cases, the victims were athletic and young, mostly white men who were seen partying at local bars and then found drowned in the ocean or lakes and rivers and that smiley face graffiti has been found near the scene. The theory has been ridiculed by a number of others and dismissed by the FBI, with most of the agencies citing a lack of direct supporting evidence and that the autopsies of the bodies that dismissed the incidents as accidental and usually drink/drug-related.

The Smiley Face Killers are a wholly theorised group of killers. There are not even any cases that can be pointed to as being said to definitely be conducted by the killers. All that we know about these theoretical serial killer(s) is that they target athletic young students and leave them apparently drowned in the ocean, while leaving a smiley face symbol graffitied nearby. With actual details so scanty, this means that Bret Easton Ellis essentially has to make up the entire plot of the film from scratch. Even then, his script never does much more than go beyond these basics with wider speculation about who the mystery hooded figures are being left a mystery.

Smiley Face Killers is not a particularly interesting film – most of it consists of mysterious figures lurking around shadowing lead character Ronen Rubinstein, and he getting into arguments over the gaslighting games that they play. The film does briefly burst into action and picks up considerably at the end but three-quarters plus of the runtime feels like padded filler (or a very slow slasher film).

Certainly, I do have to commend Tim Hunter in that he does generate some reasonable tension in the scenes with hooded figures lurking around the apartment, appearing in the background and the like. Like the scene outside a beachside toilet with the hooded figure (played by Crispin Glover) lurking behind Ronen Rubinstein and sneaking up on him, vanishing as they are interrupted by an explosion of laughter as people emerge from one corner of the frame. It is all classic suspense building. On the other hand, Hunter seems hard pressed to create suspense out of scenes of bathroom taps being left on.

The film does pick up in its last twenty minutes with Ronen Rubinstein being abducted by a vanful of the hooded cultists before he manages to make an escape and is left running nude along the highway trying to get help from a disbelieving gas station clerk. That is before one of the cultists bursts in and shoots the clerk, followed by a scene where they a car that pulls up at the gas station, bashing in the head of a girl inside and then pursuing the car and set it alight. It gives the otherwise uninvolved film a series of jolts and some much-needed kinesis.