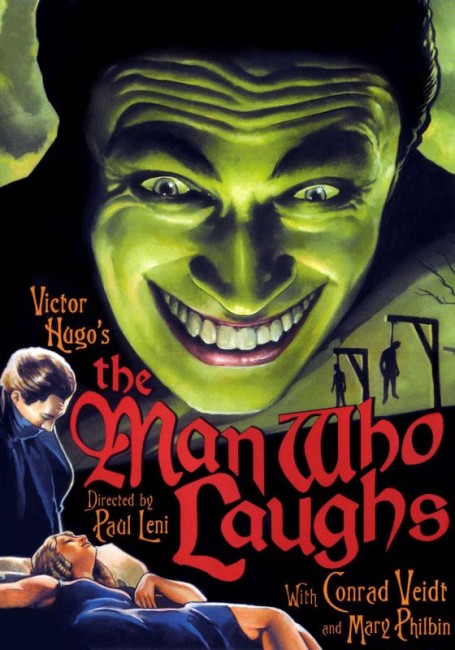 England, 1690. Lord Clancharlie, the enemy of King James II, is captured and brought before the king where he learns that his young son Gwynplaine has been given to the Comprachico Gypsies. The Comprachicos surgically alter the smiles of their victims into a permanent grin so that they can sell them as clowns and court jesters. However, when the Comprachicos are driven out of England, they abandon the young Gwynplaine by the seaside in Cornwall. Wandering, Gwynplaine comes across a mother who has frozen to death. He takes the still-living child she holds and begs shelter of the travelling philosopher Ursus. Gwynplaine and the blind child Dea grow into adulthood in Ursus’s care. Ursus tours, placing the two of them in his plays where Gwynplaine is billed as The Man Who Laughs and becomes an object of great fascination because of his frozen grin. Gwynplaine loves the blind Dea but believes she would never want him if she ever beheld the hideousness of his disfigurement. He is then recognised by the Comprachico doctor who performed the operation, who sends word to the Duchess Josiana, who has been granted the Clancharlie lands. Josiana comes to watch Gwynplaine perform and becomes obsessed with him. Gwynplaine goes to her, believing that she might love him despite his disfigurement. The queen then grants Gwynplaine back his rightful title. Torn between court factions, Gwynplaine only desires to be back with Dea – but she and Ursus have been ordered deported by the royal court.

The Man Who Laughs was made by Universal during the silent era. It was a clear attempt to repeat the successes that Universal had had several years earlier with The Phantom of the Opera (1925) and in particular The Hunchback of Notre Dame (1923). Both films had starred Lon Chaney [Sr] in stories that took place in an historical setting featuring Chaney playing a deformed individual romancing a woman. The Man Who Laughs clearly tries to replicate The Hunchback of Notre Dame – both are adapted from novels by Victor Hugo, for one. The comparison was made even more direct in the advertising where The Man Who Laughs was promoted as being “bigger than The Hunchback of Notre Dame“. Moreover, Conrad Veidt gives what has clearly been intended as another of the physically contorted performances that Chaney specialised in – his face distorted by a set of dentures that pin his lips up into a permanent smile. The film even reused some of the standing sets that were constructed for The Phantom of the Opera and casts Mary Philbin, who played Christine in The Phantom, as the blind Dea.

Unfortunately, The Man Who Laughs was not a success. This was all due to its timing. It was made silent just at the time when films were making the move over to sound, which had come one year earlier with The Jazz Singer (1927). It was briefly contemplated that The Man Who Laughs be shot in sound but the idea was quashed when it was realised that Conrad Veidt’s dentures did not allow him to speak and the film was only released with an orchestral soundtrack instead.

The Man Who Laughs was directed by German emigre Paul Leni. In Germany, Leni had made the historical film Waxworks (1924), a classic in the Expressionist style of the German silent era where Conrad Veidt gave a memorable performance as a mad Ivan the Terrible. Leni had been brought to Hollywood by Universal president Carl Laemmle Jr where he had made the stylish Old Dark House thriller The Cat and the Canary (1927), which had been a big hit the previous year, as well as the Charlie Chan film The Chinese Parrot (1927). Leni would go on to make another Old Dark House thriller The Last Warning (1929) but his promising career was cut short by his death of blood poisoning in 1929.

The Man Who Laughs is an exquisitely produced film. For all that people often dismiss silent cinema as crudely made, this is a work that has been produced with the consummate artistry and the very heights of production design, photography and directional élan that were available during the era. Paul Leni brings an extraordinary arsenal of visual trickery to bear on the film – like the striking opening scene set in the king’s bedroom with a wall covered by giant twelve-foot carved icons, one of which suddenly opens up as a secret door. There is a superbly moody set piece when young Gwynplaine is abandoned in Cornwall by the Gypsies – a scene that is pure German Expressionism. We see the child Gwynplaine following a trail of footprints in the snow that lead to a cliff face, only for Leni’s camera to pan up and show the silhouettes of skeletons dangling on hangman’s gibbets overhead, before the boy finds the mother frozen to death in the hollow of the cliff holding a still living baby.

The main failing of The Man Who Laughs is that after such a visually arresting opening the film slows down. The film’s biggest problem is simply that it is too faithful to the Victor Hugo novel, which was originally published in 1869. The middle of the film tends to drag down amid a lot of overly complicated plotting about the discovery of Gwynplaine’s heritage and the Duchess’s court schemings. The story feels over-plotted here, amid which some aspects are not clear – we are not sure why the court jester Barkiplhedro seems to be manipulating the situation, nor for that matter why Josiana becomes obsessed with Gwynplaine, whether she knows the truth about his heritage, or whether she genuinely desires him. Certainly, Paul Leni plays the various arrests and schemings for fabulous melodrama.

Conrad Veidt gives a memorable performance with his angular face contorted into a rictus grin, his hair slicked back and his eyebrows seemingly frozen in wide-eyed surprise the whole way through. [Bob Kane has directly cited the character of Gwynplaine as the inspiration for the creation of The Joker in the Batman comic-book and it was later borrowed as the title character in the William Castle flm Mr. Sardonicus (1961)].

As the Duchess Josiana, Olga Baclanova, the expatriate Russian actress ]who later gained fame as the scheming Cleopatra in Freaks (1932), gives a performance that makes the screen ooze with sexuality. Paul Leni seems to put everything he has into depicting Baclanova’s sexuality – showing her draped across her bed in a negligee trying to seduce Conrad Veidt and making remarkably intense eye contact across the crowd during his performance. The Man Who Laughs was made several years before the Hays Code came into place and Leni is able to get away with scenes showing her naked from behind getting up out of the bath. Mary Philbin plays with the sort of dewy, wide-eyed innocence that had been personified by Mary Pickford during the silent era.

The Man Who Laughs had been filmed as an earlier Austrian-made silent production in 1921, which is still in existence today, and as a later French-Italian sound production in 1966. Neither of these versions are widely seen and the version here is the definitive adaptation of the Victor Hugo story.